It was NOT just another day for me. And I had a feeling it was the same way for my friend too. Both of us were quite excited, curious and enthusiastic to attend the ‘Puja’ as the locals called it.

We booked a cab a day before and we were ready by 7.30 am but I guess in a place like that, you need not be particular about time, things will happen when it has to.

We had our usual Chai lovingly brought by Chachu Ramji and waited for the cab. And with the speed and rashness that only the youth can drive, zipped in a kid driving the van.

The guest house owner kept on cautioning us that the driver decided not to stay for more than two hours blah blah extra money blah blah and we just nodded because really what mattered for us was seeing HIM, listening to his teachings, feeling the air of ladakh, it’s atmosphere and it’s beautiful people..

The wildlife photographer friend decided to sit back on this. It was just us two.

I guess sometimes, just sometimes rashness and the brashness of youth helps because this kid drove us right outside the venue not heeding to anyone as most of the vehicles were parked at least half a kilometer away.

How do I explain what I saw as we started walking towards the beautiful open ground venue?

Imagine vast magnificent bluish blue splitting clouds and skies and people from all over Ladakh dressed in their traditional finery, tribes, sub tribes, maybe even from north eastern states, they were all walking with us. It was truly a carnival, a Mela!

It was slowly seeping in, the energy, the ambiance, it’s vibrance, yet it felt like a moving meditation. It was a delight, an absolute delight to be a part of this collective energy.

To walk along with the people, young mothers with babies on their backs, Hot Momos and Tibetan bread being sold on the streets, hot Chai, Butter Tea, Tibetan stands and more. And oh how beautiful each one of them looked in their attire, their jewellery, their varied magnificent head gears, it was overwhelming and all this under the vast open skies with the mountains overseeing all this.

As we waded our way through trying to find a space between the vast crowd amounting to 1000+ in numbers at least, I also observed that with all that rush, there was no pushing, no clamoring for that small space, small spot, the need to be in the FRONT and get the first LOOK, first DARSHAN that usually happens.

What a difference between this gathering to some other religious gatherings. People followed what they were taught. There was politeness in them saying No when there was no space. There was humility, dignity, a sobriety on a big occasion like this.

As we were struggling to sit among the locals, a kind volunteer helped us saying the Foreigners stand was somewhere else. He said that simply because Dalai Lama would be speaking in Tibetan and there would be translations broadcasted in speakers in different languages and English was on the other side.

We found a space and waited for him. As we looked to the side, we saw beautiful women and men dressed in their finest traditional robes and that’s when we knew he would be coming from that side. My friend looked at me and said GO, see him I will wait here. So I ran to that side and waited and watched with my camera.

So much anticipation, enthusiasm, the women, the men, the locals and the rest of us. I started talking to a French girl and she was so overwhelmed by it all and she told me she comes every year for his teachings and she is always as excited to see and hear him as if it’s for the first time.

And he came, slowly walking, slowly greeting all the tribes men and women who stood to greet him, locals went berserk yet again there was no pushing,no jostling no shouting at people, nothing. It’s inbuilt in the Buddhist Culture.

I saw him and something burst inside me, my heart was exploding, all the tears that I was holding back, it just came out. I was shamelessly crying watching him and something beautiful was happening. The collective energy was surreal.

Dalai Lama is a renowned world figure, a spiritual thinker and teacher and an extremely intelligent man and most of all he is almost like a God to the Buddhists but what I saw even in his most ardent devotees was humility, dignity, not falling at his feet but quietly bowing with a  Namaste.

He came onto the Dais and went on all sides bowing to all, then he called out a really old man who was standing with the rest of them. He spoke to him, bowed to him, blessed his meditation beads. And this man did what is the essence of Buddhist tradition. He shared.

After the blessing, he gave his meditation beads to others, to touch it, to feel the energy, to share it with others what he received. What I saw was the true spirit of a faith.

What His Holiness spoke next I might not be able to write this in detail but what I can give is when he spoke the most important thing the world needs today especially in the turbulent times we live in.

The need of the hour is not to hold onto centuries old scriptures and rules of a religion but to question it, not just criticize but to use a critical analysis, use reason when it comes to your faith.

He mentioned his love for science from the past 40 years. He emphasized that Science and Philosophy also has to be taught along with religion in monasteries. It must be a part of the curriculum. There is no way you can separate Science from Religion anymore.

This man was ahead of his times truly, he was urging people, especially monks to remove the age old superstitions that exists in every religion and to use reason, logic and even take that constructive criticism. It blew me away. Especially when we see what’s happening in the name of religion.

This was maybe the most profound talk I heard in years. Simply put and so hard hitting.

We were in a daze as we got out of the meeting, his teachings were still lingering, it touched a nerve somewhere.

Look at Social Media, news/newspapers, people, their negativity, fighting for their own selfish interests in the name of faith. Even God has been bartered here and here was this man in his own way implementing this same critical reasoning, questioning to his faith and asking his followers to do the same, to not go by the book.

In that daze, we went to the famous Druk Padma Karpo School  which means Druk White Lotus School and if you are thinking if it’s some historic school, nope it’s not but it will ring a bell if I tell you that Aamir Khan shot the last school scene right here for 3 idiots movie. Yup the same one folks.

Our intention was different though. My friend’s son in law works in a London Architect Firm that helped design the school and my friend was insisting the architecture was worth seeing it. This was a part of the architect firm’s charity initiative projects.

But Yes as we entered the gate, it was also called Rancho School just for the Indian tourists to identify with it 🙂 I would say why not? If the school benefits from it, all the more better!

Take a look at the architecture and you will know what I mean. I couldn’t take as many pictures as I wanted to because to go inside the school premises was off limits except the famed ‘ 3 idiots wall’.

The whole design is based on the Buddhist Mandala. It’s a subsidized school that has 800 kids out of which 350 students are residential.

We spoke to a teacher briefly and she told us there were 395 boys and 369 girls and I was delighted! Why wouldn’t I be? Here was one school in a remote region that had girls almost equivalent to the boys!

My friend also told that the designs were made in such a way using local materials that in the event of a calamity the rebuilding would be easier using local help. And it did happen. When the landslide happened in 2010, the rebuilding process was easier.

Imagine in the middle of what feels like nowhere is this beautiful school with the Mountains  and the vast skies as your landscape surrounding you. Can you just imagine how it must be studying there? 🙂

As we sat in the cafe next to the school, we decided to go to Shanti Stupa again. Yup it was pulling us and we did go to the meditation hall, reflecting, being present, in stillness, in silence, in the noise, in the energy of the crowds.

A fruitful magnificent exhilarating overwhelming day ended and we were all set to visit Tso Moriri the next day in what would be a long road trip and that would be an adventure by itself thanks to our driver! 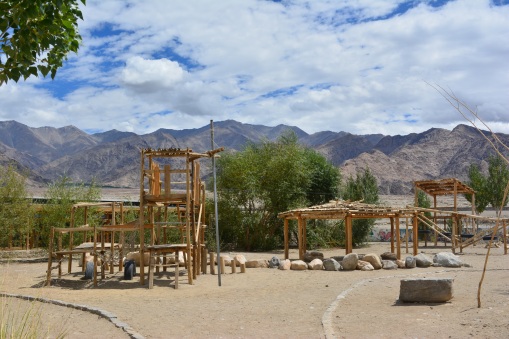 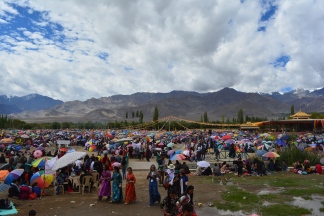 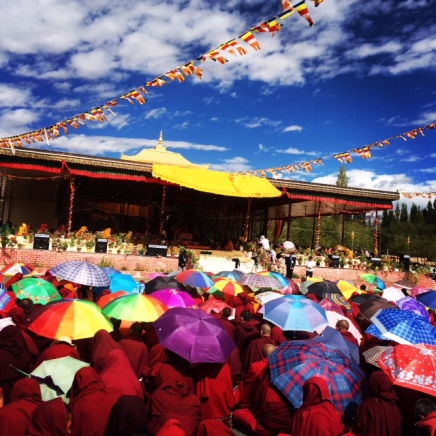 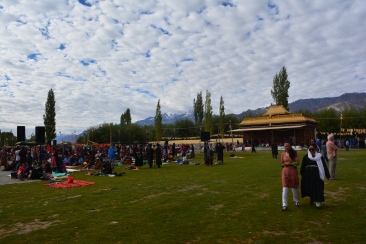 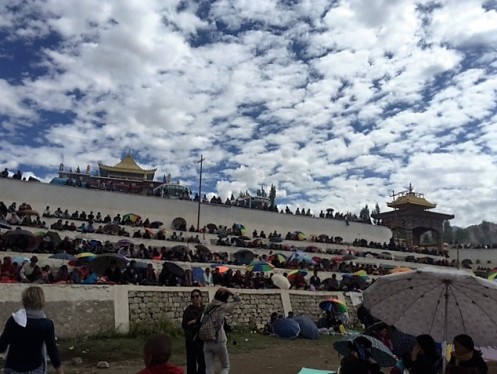 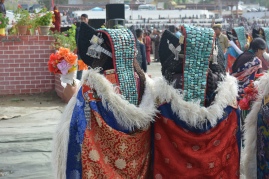 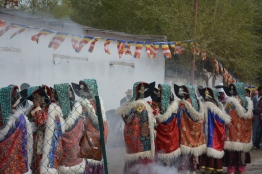 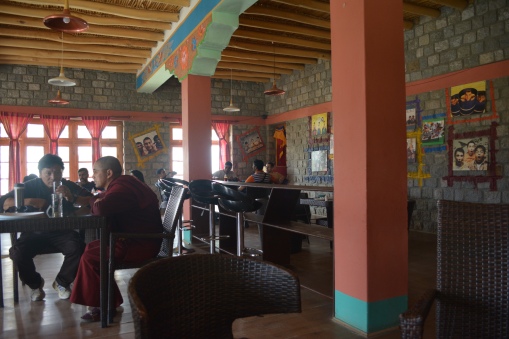 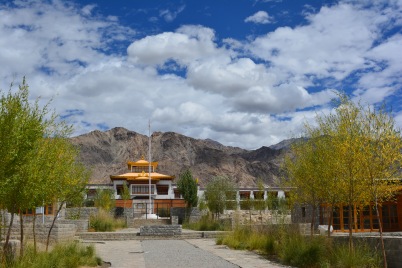 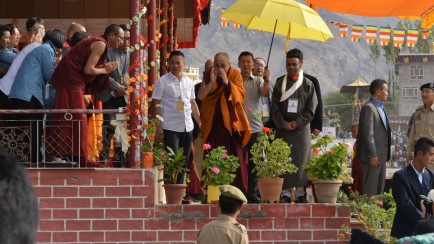