Around 5 pm Qamar came to our accommodation. We preferred walking because why would you want to get around in a car at this beautiful place?

The first thing that struck me was when he told us about an instrument that weighed half a ton that was used to map the whole sub continent manually. Here is one of the most amazing stories that is actually true.

During 19th century, the government decided to map the sub continent, yup the whole Indian sub continent that was under the British Colonial Rule including the Himalayas

And this is what they did, used the instrument I mentioned above and mapped it bit by bit all way up till Mount Everest manually!Can you believe that?

It was first started by William Lambton who conceived the entire idea. Can you imagine the surveyors and the survey during those times? To have to do that manually inch by inch through the length and breadth of the continent. Real perilous conditions..That thought itself was mind blowing.

It did it have it’s fair share of sacrifices, took a toll on the surveyors and was finally completed by George Everest – yup the same man on whose name that greatest of greatest peaks is named after.

Imagine having to measure and map Mount Everest! I would have never ever known this. I was soaking in each and every word he was saying. I was dumbfounded, enraptured by it all.

If you really are interested in knowing more, please go ahead and buy The Great Arc – by John Keay which completely explains the historic scientific mapping ever done. Qamar specifically recommended me to read it when I asked him. The geek in me squealed with joy 🙂

As we were walking around, Qamar patiently explained every tree and it’s importance to the ecosystem. I remember one particular tree species spread everywhere around the institute. It was Sal trees. Teak wood to be precise.

In fact the trees were completely devastated by the British Raj to be used during World War II. The Sal tree was used in Railways Sleepers – yup the same one for Railway Tracks.

He was recollecting as to how wild this institute was when they shifted here almost 25 years ago. Just to walk from the main entrance to their house was a challenge. Really wild. They still have sightings of leopards and elephants in their backyard. He smiled when he said an elephant was peering into their portico once.

What I realized was that every tiny fiber, every leaf to every branch  to every worm had a role to play in our ecosystem, nothing was useless and it made me wonder, were we the ones redundant now? To the point of being useless and not adding anything to the ecosystem?

We saw a big Termitarium ( termite mound hill) which he said was very useful for the Sal trees. Sal trees roots fed on the mound and this big mound would keep Sal leaves so healthy that it wouldn’t decay for years.

Pardon me if I am boring you with all this info, I might sound like a mini encyclopedia but believe me, Science is not for ‘Scientists’ or ‘Researchers’, it’s for US, for all of us. It is as simple as it is.

I mean when I think about what all he spoke, this blog itself would take another 2-3 posts. It was knowledge, pure knowledge and I was like a sponge receiving it.

We spoke about Traps, Poachers that were the biggest bane today and Tiger Captures and how for the poachers it’s easiest to capture tigers.  Usually hunters are the best poachers so these people who are into poaching business hire native hunters to be poachers.

Here is something interesting Qamar shared. He said tigers are like Humans, arrogant, over confident and that’s one of the reasons why they get caught easily unlike other animals.

He also mentioned that a Tiger and Leopard can’t co-exist in one ecosystem, Nope. Only under special circumstances of time and space they can. It was an interesting choice of words.

Among large Predators, Tiger was the most intolerant towards humans.

He quoted an interesting Sloka from the Mahabharata – ‘If a tiger exists in the forest then everything is well’. and he said it is true and how our ancestors knew all this thousands of years ago and were so connected to the ecosystem while today we blindly follow a Western thought process.

I was surprised when he was quoting Sanskrit verses knowing he was a Muslim and we would usually not expect it to be that way.

He is from Indore and grew up in a progressive educated family. His grandfather was an army man who fought during World War I and lost his eye. His father brought him up exposing him to the texts of all religions. He knew Hindi, Urdu, Sanskrit, Pashtoon. It was an eye opener.

As we sat near a small lake, Qamar spoke about the Amur Falcon birds that migrated from this side of the region to another continent flying massive distances.

They would fly over Mount Everest using the wind currents and they could fly at a stretch for 15 days! And this will zap you too. Remember Dragon flies?? Yup the small ones you used to play with as a kid? Well they do the same too! Covering massive distances.

My head was whirring seriously. What a blessing it is to encounter someone like this and learn so much. In today’s digital age and total over load of information, this was a rarity.

When he spoke about the young researchers, he said with a tinge of sadness tell me how many want to do this for passion?

Now it’s like any other career, a ‘job’.  The youngsters today don’t have passion or patience, they have ‘options’ and until one has a passion for it, one cannot go the distance…

It was time for drinks, food and spending time with the indomitable Neeta! 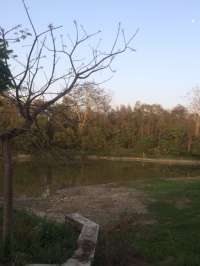 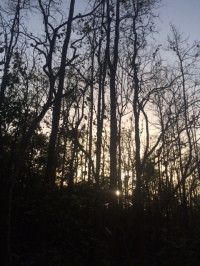 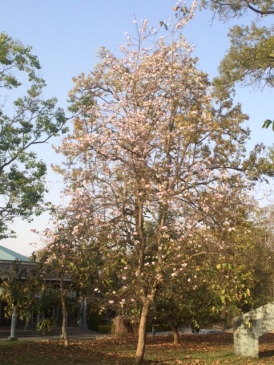 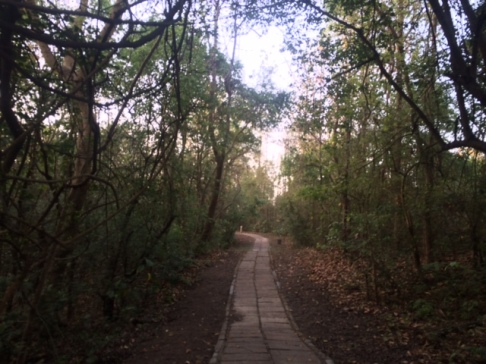