What would you do in my situation?

Imagine waking up with a shock to see a man pissed drunk. Even in that split moment I could smell the stink of alcohol and the intent behind that man.

And I am thankful, bloody thankful for having kept my folded umbrella next to me on the bed. I don’t know why I did that, maybe it was an instinct inside to have some sort of weapon before I slept, something handy.

And everything happened pretty fast and I have to thank my reflexes. I jumped out of my sleeping bag, grabbed my umbrella started screaming and hitting him with a big ‘WHACK’ and went on “WHACK WHACK WHACK”!!

I screamed and kept hitting him as he fell outside my door, in short creating a huge commotion, such a huge one that all the lights in the other rooms were on and the people were out.

I knew I was safe NOW that everyone was up and awake. And the rooms owners came running up hitting him more and dragging him away.

My heart was racing fast, my hands were shivering, my palms went cold and white,  I was in a spaced out zone with pulse racing like a Formula 1 car.

I couldn’t get back to the room, I sat on the steps as people started surrounding me, consoling me saying it’s OK now, it’s done.

I saw some women with families who sat next to me . It cleared me up a bit knowing there were other people in the building.

The owners came running up apologizing big and saying he was a Nepali guy who lived two buildings away and they had no clue how he slipped their eye and came up as there was always someone at the Dhaba to keep a watch on the rooms.

The fact was that in that small place it didn’t go unnoticed at all that I was alone and I was in this room. Why only my door? He knew very well my room number. THAT was shit scary.

They kept telling me they hit him bad, he was drunk it never happened before, so on and so forth. At that point I could just be quiet, my mind was numb.

Finally, I closed the door to my room as others went back inside and I kept staring at the walls and the window . I could not lie down after that forget sleeping. It was 1.45 am already.

Just 1.5 hours to go. Where would I go at this time? The taxis to Gaurikund would start post 4 am only.

Those were the most excruciating hours I spent, pacing back and forth. I got ready as fast as I could and by 3 am I couldn’t take it anymore, I went down with my luggage and sat at the Dhaba.

Seeing me, Alam and his assistant immediately came to me and said sorry. They were saying please don’t take this to heart, forget it, it won’t happen again.

Only 2 cups of Chai could calm me down a bit and seeing the world waking up slowly.

Sonprayag was nothing but just a road strip with homes so it felt better to see people, cops going about, the sounds of the bells of the ponies. It slowly felt normal again.

I came to know that the check point to Gaurikund would open up for Taxis at 4.30 am, for ponies from 4 am.

At that moment I thought should I just check in to that resort at Sitapur for that day, relax my nerves and go to Kedarnath the next day? I did have time.

But something inside told me NO, do this today, get to Kedarnath. This is just a test, don’t back out and so I didn’t.

I saw a young cop coming to the Dhaba for Chai and I started talking to him. Uttarakhand cops are friendly and really helpful. It didn’t feel like I was talking to a cop. I could never do this in Hyderabad! Who wouldn’t avoid the cops??

He was on night duty. They had to keep a watch to ensure nobody escaped the check posts or get out without a proper Photo ID issued by the government. Seriously they had no life.

We started talking about the landslides in 2013 and he told me it was so bad that from Sitapur till Kedarnath, it was severely damaged with landslide rocks and floods.

So many died and the people who survived were worse. They went hungry for a month.. Yes for a month. They were stuck properly. They couldn’t get out.

They would scavenge the destroyed nearby fields and lived on the leaves of potato.. Just imagine eating only leaves for a month.

I thought of Manojji – our guide in Deorital Trek and how his restaurant in Kedarnath along with his family was destroyed.

After that, even my situation and what I went through felt tinier if not better.

I was thankful to god that I had the strength to do what I had to do. I defended myself. But what chance did they have? You might think those are two different situations and in a way they might be, but in the end it’s survival.

A senior cop walked in for his chai just then and joined us. When I told them I was traveling solo, yup walking up till Kedarnath and back, they only encouraged me with big smiles and words.

He asked me if I have eaten anything and to eat some food before I start. I reassured him I have enough snacks to keep me going and I will have something to eat midway up there. He also told me it’s totally safe and I will find toilets, Chai and food shops if I wanted to stop for sometime.

I remember his words clearly, ‘Dumdaar’ and ‘Himmat’ and he said God Bless You. I use those words simply because I saw that Dumdaar and Himmat (courage) in so many people during this journey. So many of them whom you will read about later.

The senior cop and his young colleague wished me well and left. And here is the thing which I never saw before in cops. He paid for his and his colleagues Chai.

The taxis started, it was 4.45 am and I had to take a shared one up to Gaurikund. I left my backpack at the dhaba and he gave me a receipt for it. As I was about to pay , Alam said the cop paid for your Chais. I was like what??

He smiled and said yes he said woh ladki akeli hain, itna to kar lu (The girl is alone, it’s the least I can do). After that nightmarish incident, it’s this that tears me up. The kindness, the paradox of it.

I got into a shared jeep that was already bursting with 20 people! Don’t ask me how I did it. I sat in the front with 4 people already in it excluding the driver. There was an old man who shifted and shifted till I got some space. It was 20 Rs per person till Gaurikund.

We set off to Gaurikund, just 5 kms away yet quite a bit  if one looks at it from the point of mountain distance.

Rocky, winding roads up as we crossed the ponies. The driver had no qualms that there were 20+ people in his jeep, he was driving as fast as a motorbike does, gravity be damned 🙂 I thanked myself for keeping an empty stomach.

Finally we reached Gaurikund. And it was so beautiful looking up.

Far and way above one could see the Snow clad mountains that were closer to Kedarnath and the beautiful Alaknanda river that would follow us throughout the trek. Slowly darkness was turning into light. 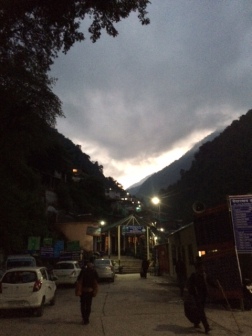