Finally we could see Lincholi up and above us.

As we were taking the shorter off the beaten path trekking routes, we were getting breathless, my whole body was now aching but at that moment it was that adrenaline rush, all that excitement and pulsating energy that kept us all going.

Vishu was right. Lincholi was a proper camping site. Camping tents all over on the mountain. There were even Government organized tents. I could rest here and continue the next 10 kms tomorrow OR… Do I go ahead?

It took me seconds to make that decision. No, I will keep going till I reach Kedarnath. I will stay there for the night but not here. And so I moved ahead with the group taking the shorter trek routes.

My knee pain was showing up,plantar fasciitis on my soles (read up on the net if you don’t know!) was showing up but this is the thing, all that logic, all that physical barriers somehow doesn’t matter at that point, you ignore and you take that pain with you and keep going.

More 6 kilometres to go and signs of exhaustion were creeping up big time. We stopped at a beautiful point where there was this deep ridge filled with snow and I mean filled up totally. When you look at the photo you know what I mean..

It was foggy, getting even more foggy which meant that it might rain too.. But we had to stop here. To look in awe at this wonder.. Rolling greens, this snow and fog.. and right ahead were these slippery descents and ascents with water crossings.. And lot of people coming from both sides on ponies.

One had to navigate carefully watching over everything. At one point I got pushed towards the mountain side wall, like almost crushed with the sudden wave of people and ponies and being on slippery rocks.

It was not all in silence,one person or the other would say something because after a point the short cut trekking routes were totally fogged up and it was risky to use those routes. The visibility was very poor and we had no choice but to take the long main paths.

The older man and his family were from Rohtak, Haryana. He was working in the Judicial department as an assistant. He studied Law but realized he couldn’t be honest and be a lawyer at the same time so he joined government service.

An atheist he said yet he believed in an energy that was so much bigger than everyone and everything, that’s what he believed. He also said he could feel a divinity here that was unexplainable to his cynic mind. An astute observer.

The Kanpur boys soon disbanded and stopped at one point as they had a large friend who was not keeping pace. We said we will meet again at the top.

The older man spoke about his family, his wife, his son, his life and work. And most of the stories are similar.

Family pressures, not able to pursue their dreams . Giving up something you love for the sake of family, livelihood. Look around us, our parents, our extended family, it’s the same, there is no difference at all..

Slowly we could hear the sounds, yes the speaker sounds of Bhajans, if I remember correctly the soothing voice of Anup Jalota  was somewhere up there, were we close to Kedarnath temple?

No, we were just about reaching Kedarnath Base Camp. Yup it was called that way because there were a whole lot of options for accommodation here. All Tents.

The permits were taken out and shown to the officers posted there. We still had 1.5 kms to reach Kedarnath temple.

It was sunny again just as it suddenly gets in the Himalayas. Totally unpredictable and beautiful.

The kid was dead tired now. He was only 12 and silently without complaining he walked the whole journey with us. I don’t see that in any of the kids I know.

After some time the poor kid was pressing his legs, pleading with his father to sit back for some more time. His father was commendable with how he encouraged his son saying Just a little bit Beta (son).

Even I started prodding him, then I held my hand out and told him Chalo let’s do this last leg together and so he held my hand while we walked through the last bit.

We followed that distant voice, that song and believe me nothing is more soother than hearing that. It was not blaring, it was like applying a balm to the body, heart and soul.

So many devotees on their way back encouraged all of us and I mean to each and everyone who were ascending the final leg.

They shouted with a smile you can do it!  They encouraged saying Aur thodi der, pahunch gaye aap (A little bit more and you are there).

They held hands briefly and said Just see HIM and you will be refreshed. They smiled, they offered their Prasad(offering), we greeted each other with Jai Bole Nath.

I saw true human spirit and I saw Love, ONLY LOVE. There was no room for envy, hatred jealousy NOTHING, just pure Love.

In front of me I saw a frail old lady with a limp being supported by her family and walking.. She was walking for 3 days, slow steps very slow steps. I could see her eyes twinkling knowing she was nearing.

It’s at that moment it hit me hard, I thought I will collapse with all this energy. That sheer energy of people and atmosphere, it was electric.

I was crying hot tears and the kid asked me Kya hua? Aap tak gaye? (What happened? you got tired) I nodded Yes for I had no other answer to give him.

I saw those frail Palkiwalas and Basketwalas carrying older people to sturdy men and women and women with children all on their  shoulders and backs. This is the sea of humanity people, this is hard, really hard to see and take it in you know..

That’s when you feel tiny, so tiny and insignificant time and again. Who are we in front of these people? Such courage and resilience. Dumdaar and Himmat (courage) applies to them.

And most importantly Who are we in front of HIM? In front of the Omnipresent and Omnipotent? We are nothing.

As we  caught the first glimpse of the temple dome ahead standing out surrounded by the holy Himalayas, I did what I never thought I would do in my entire life.

I just went flat on the path, prostrated and cried. Bowed to the earth, the mountains, the omnipresent and to all the people.

Oh man, the great Adi Shankaracharya chose this divine place with so much wisdom and vision. It was bound to bring any man/woman/being to their knees.

I came to know what is Jhukna’ (Bowing) for the first time. Bowing down to the elements, to the God in us, to the people.

And nothing went according to PLAN, did it?

You made me come here, You gave me the courage, the strength to make it here, You made this all happen.. You made me meet such wonderful people during this journey.

And I am finally here to meet you.. 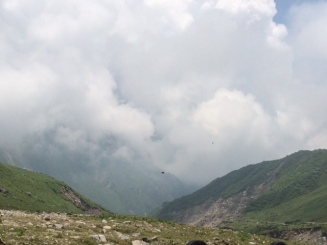 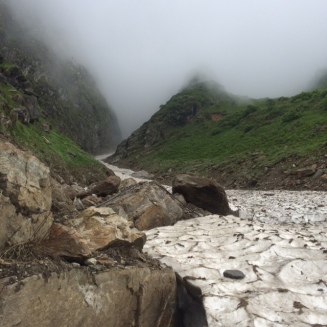 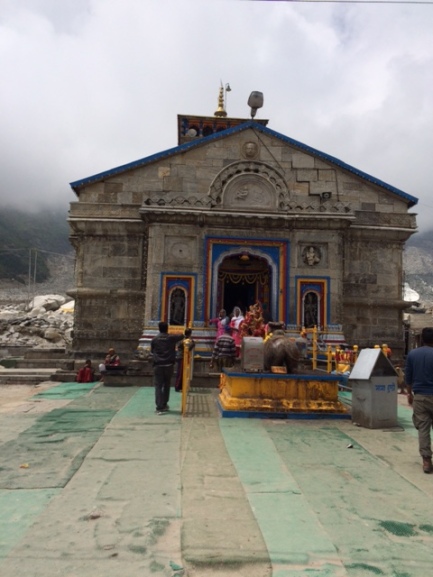 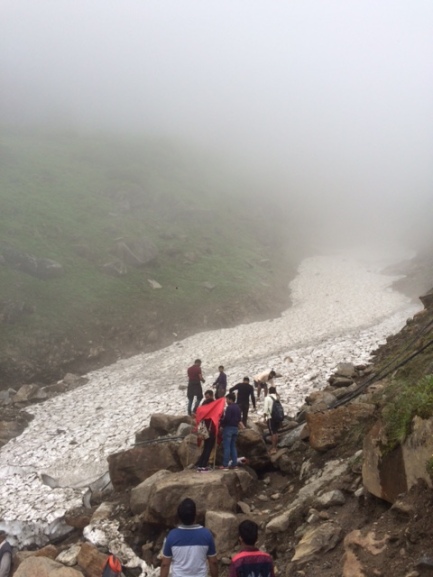 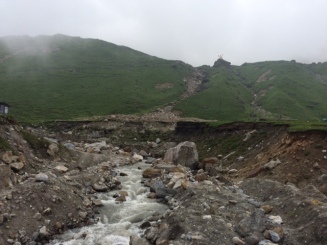 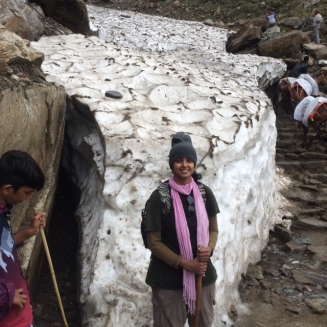