As we started walking back,I soaked in the surroundings..

While ascending up, yes there is the beauty we take in but the mind focuses more on reaching the destination, so this time I was gazing at the landscape around me.

And I had what I call a ‘Kodak’ moment. If you were from that generation that saw Cameras with roll films and negatives while you were growing up, you know what I mean by that phrase 🙂

Those beautiful rolling greens was enveloped by fog and slowly it was lifting up like in slow motion and I could see dots like tiny dots in black and white so I went closer to the edge and paused. What I saw took my breath away.

Hundreds and I means hundreds of sheep grazing on those steep rolling greens spread out far and wide. It was like a cinematic visual you gasp at… It was ethereal I tell you..

The descent at the beginning was not bad, the soles on my feet were groaning but somehow it didn’t bother me at that time, it was a choice I made and I decided to stick to it.

And the same thing happened like a Deja Vu when we saw people ascending towards the last leg. We encouraged,smiled shouted you can do it. It was all coming from the heart, what you get, you give back.

The fog lifted up after a few kilometres and we could see the short cut trekking routes and now it was descent.

The Maharashtrian man decided to take the longer main path while it was just the two of us now down the trail. We crossed the Kanpur boys on ponies as they waved us goodbye and best of luck as we went towards the short cut route.

The first one was steep and I mean really steep descent because when we ascended we couldn’t take this one because of the fog. This time I was petrified as I looked down. I lost my fear of heights but with my wobbly knee,the descent was scaring me.

Then my travel Companion soothed my fears and told me to watch his steps and follow and I did and the beautiful thing was we paused whenever we could, we looked around, we gasped at the many landscapes we were discovering in the process.

There we could see the gurgling brook at the edge, on the other side were mountains one after the other. We looked back and we could see Kedarnath now becoming tiny and minuscule, the fog slowly covering it and it felt like it was a dream,a distant dream..

After a point I wasn’t scared anymore, the beauty of it made me not think of my own fears. I was in Paradise. There was no one on that route. Just us as we trudged on rocks, wet paths, crossed the flowing waters, heard her laughter and again looked all around us.

Then we saw a young man removing his shoes and soaking his feet in the water. I couldn’t resist it and no plea by my companion that we have to get moving worked. I hurriedly removed my shoes and put my feet in that cold water and it was heaven, it was curing my aching feet.

I told him listen it’s ok, sitting here for 10 minutes won’t really harm us and so he removed his sandals and did that. After some time I could see him taking it in with a big smile. The Mountains tell us so much na?

The other guy smiled and waved.He was from Indore and had come with a friend today. He was staying back tonight while his friend was on his way back. Saying Bye to him we  carried on.

Silences and conversations happen and so my simple straight forward friend was very curious as usual about my life. Isn’t it lonely being on your own? Why do I do this solo travel?? It’s dangerous! Doesn’t it get boring? What does your family think about it?

I told him if I wasn’t on my own I wouldn’t have met anyone of them and that’s one of the perks of a solo traveler. You are more open, you are on your own schedule , you are spontaneous and you get to meet so many people.

We had cut almost 3 kilometres with that path and we were jumping with joy!  We found a couple more short cut routes which we could trek easily.

The sun was fading but there was still some light and we crossed some of the most beautiful landscapes I tell you.

It was picture perfect, it was 7.30 pm but it was almost like twilight.The fog setting in, flowing waters, rocks that looked as if someone painted it white. I wanted to just jump into that scene and stay in there, you know what I mean?

Waterfalls that would fall from rocks directly into your path, spring water everywhere that I could fill up my bottle with. It was pure joy.

It was getting darker and we could see fewer people.  Either they were behind or way ahead. We would hear the jingles of the ponies occasionally as they carried people back.

At one point we saw a big group climbing up. We were 10 kms down. They asked us earnestly if it gets easier and if it’s closer. I didn’t want to discourage them so I simply said, just keep walking and take a breather for just 2 minutes at intervals you will be able to make it.

And then I saw that unfortunate incident, A big lady lost her balance on descent and fell over. Yup fell from the pony. It was no one’s fault. There were steep descents and when the pony descended one had to keep one’s balance.

We rushed towards her side as she screamed loud. Her family was shouting at the poor caretaker and he was pleading and saying Sir, I kept on telling you when there is a descent don’t lean forward…But who listens?

The lady was shouting at him and screaming as she had hurt her foot and the caretaker didn’t get his fare.. They all got off and didn’t pay him anything, not even for the 10 km ride he did for the remaining 3 people at least. It felt so unfair… His livelihood, those ponies..

Half a kilometre down was the medical camp so we told them to stay there while we go and inform them but before that my travel companion said what was going in my mind.

He told the lady’s husband, yes she fell, yes it’s unfortunate but uske pet pe laath mat maaro (Don’t deprive him of his livelihood). Pay him at least for the 3 remaining members for the 10 kms he did.

Saying that we rushed down and informed the camp guys. Thank god for the facilities. He took his kit and sprinted up with one more guy.

Now it was dark, proper darkness  but there were intermittent lights and sometimes I used my torch.

The man was dead tired, his calves were tightening, his back was aching and he was saying Aur kitni Der (how much more to go) and started asking the few tents that were set up – chai tents or officials camping there for security.

The moment he knew there was lot more to go he would groan and I would say Nothing Nothing we can make it.

But at that time, because of all the tiredness and fatigue, it was beginning to bog us down. We would think we walked 2 kms until we saw the board that showed us we walked only for half a kilometre! It was getting to us. The mind was tired too.

I started talking to myself in my head. No nothing is aching nor am I  tired, I am going to make it to Gaurikund, that’s it. I could feel the painful lumps on my shoulder blades, the weight of the day pack and carrying it the whole day was now killing me but I thought I am going to do this, there was no choice.

It was 8.30 pm and we still had 5 kms to go. It didn’t seem much but this was the mountains and our pace was slowing down as the man pleaded that he wanted to sit down, lie down for a bit.

I could see him getting scared, I could see his eyes closing. I kept on prodding him No, if you lie down we can never reach Gaurikund. His wife must be so worried, his son must be scared we need to finish this.

And then we heard it…

Thunder and lightening so close and I mean so close.. In the Himalayas it takes on a whole new meaning.

I had an experience of it in Chopta but that was in a tent and that was safer. We were in the open, we still had 5 kms to go and there were big warning sign boards of Landslides that happen at certain points on these same paths. There was no shelter either and all isolated.

Just half an hour ago I heard the caretakers of the ponies rushing them faster and saying among themselves, Aaj tho bahut baarish honewaali hai, Jaldi chalo (Today it’s going to rain hard, hurry up)

The thunder and lightening continued getting louder and louder as we walked. My hands were shaking, I never heard it so close, it felt  like it was right next to us as we were walking.

A dog that was accompanying us for some time stopped ,turned and went back and found a spot somewhere in the jungle on the other side to hide. That dog knew, it was instinctive, it was going to rain HARD.

And half a kilometre into our walk it happened..

Raining hard, really hard and I was walking ahead going a little faster and telling the man to keep walking, keep following me and that’s when the only light on that path went off.

Darkness. Pitch Black. I stopped right there with rain pounding on me and with the thunder and lightening booming loud. I couldn’t see anything and I mean anything at all, it was as if I lost my vision . 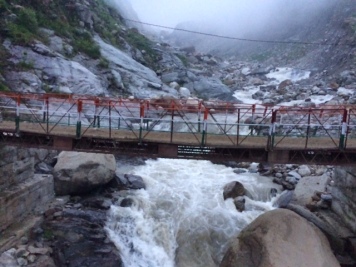 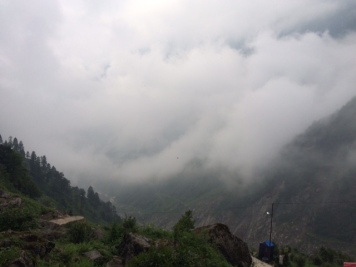 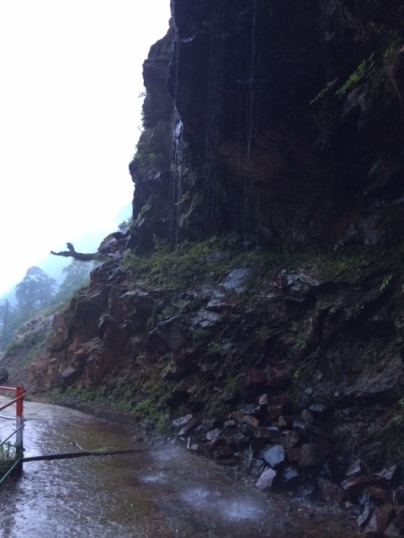 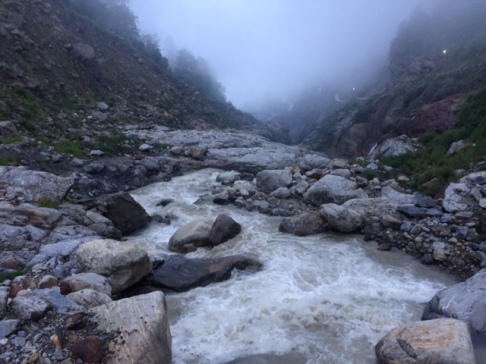 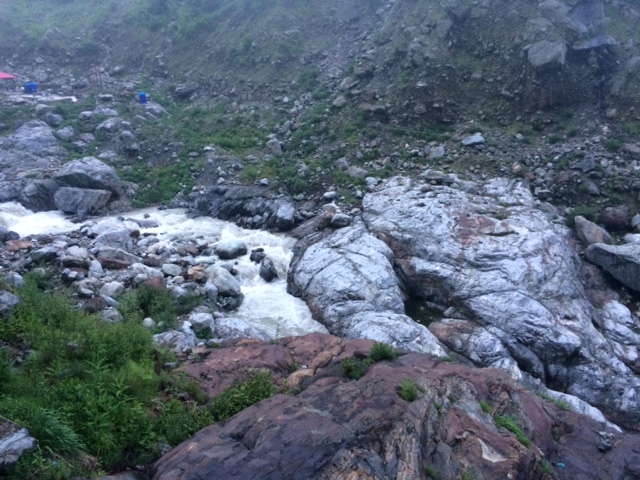