By now, the few people who read my blogs (and am so thankful you do!) know that whenever I write, it’s usually after a travel that is seemingly life changing, that shows insights, newer insights that I hitherto ignored.

If you are tired by now of that and this seems mostly a travel blog, what can I say? Interesting stuff happens only when I travel!

The rest is as routine as it can be, work, rant, eat, sleep, get Gaalis(beautiful words – abuses) from my customers and try to get on with life..

Right after my adventurous Kedarnath Trek, I was geared, excited, inspired to train hard, eat well, eat right and prepare for the big Himalayan one that would be coming up in September first week.

And training I did albeit minor injuries, stop break,s eating wrong, drinking Beer (yup everything that one should not do while training) and wondering how soon I slipped off from my lofty ambitions 🙂

As I was taking things in my stride, out came an unexpected journey.

The long weekend of Independence and the long week after that was coming up. For restaurateurs like me, dry days and holidays especially in a small city like Hyderabad means one thing, abysmal business.

Everyone is out of town and hey who wants to visit Hyderabad during that time? We are neither Goa nor Bangalore nor Bombay or even Chennai for that matter, except for those few who have to visit their family or maybe a coaxing friend stationed in Hyderabad.

And this is when your good friends come to your rescue when you are down. My friend from Bombay called me in his usual cheerful voice and asked kya kar rahi hai (What are you doing?) When I mumbled something incoherent he noticed my boredom and asked if I would like to join him for a trek. Just that word TREK perked me up!

Being in awe of the Himalayas I felt that no other mountains can come close to it and it is true except that one needs to go beyond that and be open to anything.

So when he mentioned that he and a few friends were planning just a day or two trek to the Sahyadris in Maharashtra I jumped right in!

I got excited even more when he told me Vishwanath was leading it. The same legendary Vishwanath whose tough treks I would hear about a lot from my friend.

And he did help me prepare quite a bit before my Kedarnath trip. A no nonsense straight forward man. This man believed in just his instinct, went off route and squashed away all those so called trekking must dos.

It also gave me a chance to meet the few people I really wanted to meet besides my friend.

Bombay and it’s people.. The city is enthralling, captivating, mesmerizing and either you will love it or hate it. I for one when I first stepped into the city during monsoon 2007 fell in love with it. And to be able to explore that region trekking during monsoon would be something else!

It was going to be a super short trip, how significant could it be?? Well… Read On.. 🙂 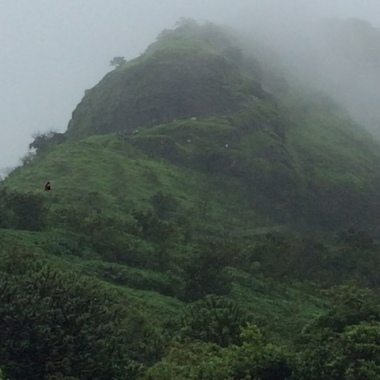