As we heaved panted gasped up the rocky slippery muddy path the mist and fog was enveloping us, there was a nice nip in the air, a nice cold chill you liked with the rains pouring on you.

And we reached a point where we saw this breathtaking sight, a long row of steps upwards that was a waterfall too! Or was it a waterfall that had steps?? The water flowing continuously and strong over the steps. And i just could not believe my eyes that right next to the steps was a cave where this man was serving hot Chai! I mean how unreal it looked to me!

Having hot Chai in the rains with waterfall steps and a beautiful Orange Red Hanuman carved in the cave? Seriously!

We walked up the steps cautiously as one slip could lead to a fracture as Vishwanath warned us and the students. The trick is to avoid the moss filled slippery spaces and just walk where water was accumulating, so much to learn and so much more to go..

And finally and I mean finally we reached the Fort… And how did it feel?

The entire fort summit was completely wrapped by the mist like a blanket. Absolutely no visibility of anything down there. Can you imagine building a fort here? The glory of those days could be seen only in bits and pieces… A dilapidated wall of rocks here and there and I was wondering what a view point it could have been for the people then.

We also saw Water Tanks! Yup water tanks at the summit  which would have been used then. Still filled up and lush green.

One of the best things was when we were nearing the summit we saw a dog in front of us. It was so foggy and since we had taken an off beat path we were wondering if we were reaching anywhere and gently this dog walked ahead of us and showed us the way.. This might sound trivial but it’s so significant here. It seemed like some of the dogs living here were guiding us ordinary mortals through these paths..

We reached the ‘summit’ and unpacked the snacks. What a bliss it was, all 5 of us sitting on the wet grass with the rain on us and eating and the dog sitting at a distance. We could manage to share some of our snacks with that awesome little fellow.

I remember looking around me with my arms open wide because that’s how you feel like doing. Keep your arms, heart, mind and soul open to anything… Anything that comes your way. You are free right now like you can never be..

It was time to head back and it was 3 pm. Initially while starting the trek the group had decided to trek as much as they could cover and then turn back because we had to get back to the car by 5 pm and then head to a farmhouse, a detour from Amby Valley for the night.

But as the trek went on it was collectively agreed upon that we will reach the fort summit, timings be damned. We were thoroughly enjoying it . And now heading back down would be something else.

Descents are scary especially for someone like me with a bad knee and the fear of falling so badly that I can never trek again. The latter part is something I learnt only during this trek.

As we were descending through the paths, sometimes same, sometimes different paths with Vishwanath discovering something new on the way I started asking myself, What am I afraid of? Heights? Death? Of my own death? My attachments? Of what if? how will my loved ones be without me? The answer came like a jolt. It was exactly the same fear that my mum had about her legs.

She had a bad history of arthritis and rheumatism and one day when she fell and never walked for a year and got laid up in bed, the fear grew in her, the fear of falling.

So even after she recovered after a year and half where most doctors had given up and she slowly started walking, she would hold on to my Daddy’s hand tight.

It became such a habit with that fear of falling, she would panic if anyone left her hand. She would walk like a baby that had just started to walk.

I had a history of injuries and major accidents myself but I thought I let go off that fear. But right then I realized the biggest fear in me was the fear of never walking again, the fear of not standing on my legs. The fear of falling so bad I wouldn’t be the same person ever again.  Funny how such jolts happen at that moment, a realization.

As we descended gingerly, and more than a few times I would sit and go down with Vishwanath shouting at me saying Don’t do that, be upright and descend, it seemed like we were hitting a dead end with the routes.

At one point we realized this was not the same path. A couple of times we had to go back a bit so that Vishwanath could retrace and see a route that could take us down. This itself took quite some time. But I can tell you this, we were laughing and joking about it.

We would have Babu Bhai asking when is this ending? How much more? Yet he would be the first one leading and descending like a warrior! A 70 year old and I was hanging my head in shame thinking FREAK! I really have to pull my socks up man!!

At one point when we again took a snack break Vishwanath retorted, We are eating more than we are walking!! And we burst out laughing 🙂

The lights were slowly dimming and when I asked what time is the sunset? I got the answer, it had set already and we had a good two hours of some light but we still had to find a way down.

We got lost twice. Vishwanath would look around, then we would follow him and again we would stop and take a different path. We were laughing for no apparent reason. And he is what he is, so he would coolly ignore all our comments and keep moving 🙂

We reached a breakthrough when we saw the village! It was so near and yet so far and we still had to find a way to go down. Certain paths were so narrow I tell you, like one couldn’t keep both feet together, so you had to walk, avoid slippery mud and rocks and see the steep descent below.

Finally we saw a few school girls ascending up on a path, they were going home at one of the villages up there. I mean imagine just one way would take them one hour. Vishwanath asked them if this was the right village and to our amusement we came to know we had descended to the other side of the mountain. To another village altogether!

We burst into laughter especially since Vishwanath kept on insisting that No No this is the same place where we parked our car. 🙂

Soaking wet in rain, mud, slush we were one bright and happy group as we walked inside the village. Babubhai and I walked with Pankaj ahead of us as Vishwanath and Mayank found people who would drop them on their bike to the car and they could pick us up on the way.

It was 6 pm and we were past a schedule but the contentment and satisfaction was something else as I looked back. Monsoon rains would not be the same again for me after this. This was tempestuous, something fatally attractive and alluring about it. To trek when it’s raining.

As we walked towards the road for another half an hour or so we got picked up and we went towards the parking spot. A change of clothes was much needed.

Finally when we freshened up , we sat at a Chai spot recommended by Vishwanath and enjoyed our hot Chai and of course when you have awesome Gujarati friends out come the snacks! As we munched and sipped a discussion was happening on where to go?

It was past 6.30 pm now and almost dark and we were closer towards Pune. The farmhouse was much further away with really low visibility. Do we take the risk and get going to the farmhouse or is it better to stay back at Mayank’s place in Pune?

Knowing us by now, I am sure you might have guessed what we chose right? 🙂 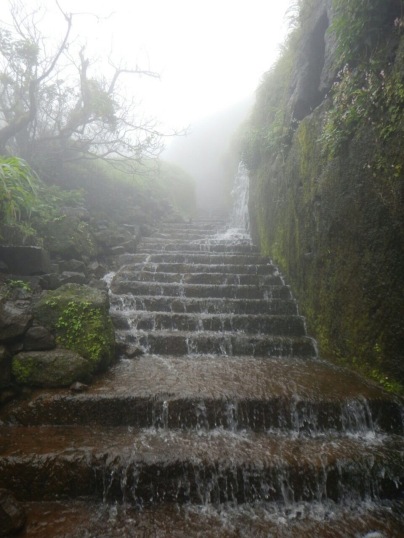 2 thoughts on “Getting lost is Good! Part IV”