Early morning with our backpacks packed and our day packs ready we were all set. We would be driving to Wan which was a 45 minute drive and our trek would start from there.

Here were 24 of them with a mix of friends, families, couples, from 12 – 60 years, coming from different parts of the country and oh Singapore too 🙂

We were already warned a day before that the first day was really tough. It was only ascent, steep high ascents.

Initially treading through villages, small hamlets with locals, children waving at us saying Namaste and asking for chocolates but yup this was gonna be tough and we were not disappointed.

My previous experiences taught me one big lesson on trekking. To go slow, to take small steps, to maintain one pace and most importantly enjoy the journey, what is the freaking point if one rushes from one destination to another?

The beauty of trekking is just this people, you will pant, you will huff and puff and you will stop to take a breather, but you also take in the surroundings, you notice that after the first one hour, your body slowly adjusts itself, if you give it space and allow yourself to let go.

You look around, you breathe in that fresh crisp air, yes that same air that has been missing in your life, you see the mountains, one peeping out from the other, you see the beautiful trees surrounding you as you ascent through tricky rocks, uneven paths and even steeper ascents yet you slowly start enjoying it all..

You don’t think, you just don’t.. like an invisible Pied Piper in front of you, you are led..

In half an hour we were led to ‘Latu Devta temple’ a local god revered by the people there. He was actually a revered person and legend had it that even Parvati the goddess took his help and as Manojji told us, it was always good to stop there and take his blessings so no untoward incident should happen.

I believed in only one thing, to respect local culture and legends no matter what. One had to respect that in their land. Some people took a rest stop and some went up to see the temple. Bhim was slowly wandering while Neha and I managed to climb up leading to the gate of the temple.

The gate was locked and the questions started pouring from other trekkers. Manojji – the lead Guide started his stories. We came down and our trek lead, yup the same one, Imroze asked as to why the delay? Why wasn’t anyone coming down? When we told him that the story session started, he started groaning and grumbling, No man, we will get late.

Slowly we started our way up, again steep ascents, really steep ascents with the pathway not relenting one bit. We had to be glad about one thing. The weather was beautiful, just beautiful. No drama, no thunderstorm, no too much sun, it was perfect.

Imroze kind of warned us that there will be many dhaba stops and Bhim and I were like Dhaba stops?? Seriously?? Is this a trek or a freaking picnic?

And true to form came the first Dhaba stop and the ‘ I speak only Kannada, walk Kannada, eat Kannada drink Kannada’ boys stormed the dhaba and started hogging. Ditto with the Delhi couple. We were like we had a solid breakfast just now, how the hell are they hungry again?

We moved a little away from the group and looked at the mini meadow, a cluster of rocks. Bhim and Nag wandered while Neha and I sat and rested. We saw a a little girl maybe hardly 2 years old holding a teddy bear half her size and along with her older brother taking her for a walk. That sight was too cute to handle!

We could see how protective he was about her and how only at 2 years she was a pahadi(mountain girl) in her blood, walking confidently through narrow paths until that scenario  changed…Our camera happy trekkers gave her chocolates and posed for pictures with her like she was a circus monkey.. People…

We truly felt how beautiful it would have been if we left situations, people as it is.. to let them be and just observe rather than jumping in for everything..

Suddenly, I felt a tap on my shoulder and I saw this guy asking me, Ma’am can you take a picture of me with those rocks? I said sure. He said this was the same location Salman Khan shot in the movie ‘Tubelight’. Believe me, I was zapped. More on this chap later.

It was time again to start moving and now the ascents were getting steeper, we were going up. Lohajung was only 7,000 feet and our first campsite would be almost 10,000 feet.

Just as we would get acclimatized to the ascent came another dhaba stop. But this stop was beautiful in it’s own way. Perched high up and surrounded by trees we were sitting and soaking it in. The Kannada boys, The Delhi couple with the Salman khan pic guy, Mr.Singapore all were munching away.

Granted the ascents were steep and tough but these stops were like an excursion now 🙂 Yett one thing I must say about the whole group, at least during those initial days, no one was in a hurry to get going, no one thought it was a competition, unlike in Deorital where we had some A type guys wanting to be the first. This was refreshing, everyone was enjoying themselves.

Our trek lead Imroze was seriously not communicating much and even if he did the few times, it was all cocky and trying to be smart repartee…

At one point I remember he asked my name like Is it Shruti? after a couple of times where we went through the whole drill again. I was grumbling to Bhim like man what have we got ourselves into? A trek lead who keeps asking our names again and again! The only name he remembered was of our dear friend Neha 🙂

Finally after a tough trek with too many dhaba stops we reached our first campsite Ghaeroli Patal. It was neither near a big meadow nor an open space, it was close, to the edge of a forest.

The campsite was not as pretty as we expected but we were glad we reached finally. It was the first day and no matter how well you train for it, a seasoned sensible trekker will tell you, your first day will always be like this, always. You can’t escape the huffing and puffing.

We were shown to our tents and Neha and I got a tent to ourselves, ditto with Bhim and Nag. Usually there were 3 in each but with couples insisting on being together, the trek lead relented, more so because they were married so it worked out well for us and it was luxury.

Our legs were showing the effects of the tough first day.  I remember Neha and myself breaking into uncontrollable bursts of laughter as we tried getting into our thermals and getting cramps in areas which were unheard of!  Just laughing non stop and Neha joked maybe it’s because we had Altitude Mountain Sickness? The lightness of it all was hitting us 🙂

We had the usual ice breakers like naming yourself with an adjective and remembering the others. And we went on a roll, Big Bhim, Niche Neha, ‘Non-mysterious Nag’, Sassy Swapna, ‘Valyrian Vinayak’ ,  ‘Amli Anand- oh yeah Mr. Singapore said Amli meant an addict  in Punjabi but no tag suited more than Imroze’s, he was ‘Irritating Imroze’ 🙂

It was almost evening and after playing a few ice breakers each one was in their own zone.

Meanwhile the Kannada boys were slowly getting on to our nerves, with their Kannada jokes and we speak only in Kannada language.  Bhim being a Kannadiga himself said he couldn’t take it anymore and that they were tarnishing the image of Bangaloreans 🙂

They were not participating in anything, and neither did the two ladies whom I still thought were a part of Indiahikes team until the older lady introduced herself. We were indeed a strange mix 🙂

In the evening just before sunset Neha and I saw something beautiful, the captivating Nanda Gunti amidst the clouds. We were so excited we wanted to tell the guys but with them wandering somewhere we let it be and enjoyed ourselves.

As we stood there watching it in awe,it was almost dusk, ‘Valyrian’ Vinayak joined us, a young guy from Bangalore.

We listened in as he spoke of Aliens, Different dimensions, about the myths, about Kanchenjunga, Manasarovar. Such interesting conversations happen only in these kind of environments, just like that. When I think of it I don’t even know how we started off talking.

It was time for dinner, mandatory oxymeter readings to check our oxygen levels and time to hit the sack. Neha and I were chatting, we could also hear others in their tents.

Just as we drifted to our sleep, sometime during late night, I heard something.. 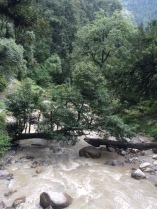 One thought on “A New Day – Part III”