We descended slowly towards Bhagwa Basa. We savored and took in the scenery around us, everything looked familiar and yet so new. How can one explain that feeling…

People were forming their own lines, some were far, some near and Imroze and Kuldeep made sure they could keep a count of everyone and who was in the front, middle or at the back.

At one point, we had no option but to stop and rest a bit. I remember Bhim, Neha, Imroze and I rested at a stop. Imroze was speaking on the walkie talkie and he heard that the next team was already in Kalu Vinayak and we had to go faster before the other team camped at Bhagwa Basa.

We made our way back and Kuldeep was regaling us with stories.. As I walked with him, he initially said I am not that great a company as I don’t talk much, I told him it’s ok just his presence was enough. Slowly, he opened up as he spoke about his life, his job, his family but more on that later.

Imroze and Kuldeep through walkie talkie made sure everyone was safe. Now when I think about it, Imroze was awesome in his own way.

He took his own time to open up and even though I don’t know how an ideal trek leader should be, it also told me each one has their own uniqueness. Some are open and communicative on the first day and some take time. He was responsible, fun loving and open minded at the same time.

The moment we reached Bhagwa Basa we were told we had only 25 minutes to eat, pack up and get going to Pathar Nachauni! We were like What the Eff?? We didn’t even have 5 minutes to rest and we had to walk all the way back now! It was a long trek and we were up and going from 5 am! We were quite miffed.

Imroze was also pissed off but the next team’s trek lead decided they couldn’t wait in Kalu Vinayak for long and started their way to Bhagwa Basa.

We were so tired and we still had to to go to Pathar Nachauni which was 3+ hours away. We packed up, had the quickest lunch ever and started walking back.

We would have no rest tomorrow either, it would be the longest trek ever for we would descend from Pathar Nachauni all the way to Wan where we started off. It was a long day of trekking tomorrow too.

As we made our way back we looked at the Mist filled clouds of Bhagwa Basa. Bhim was right, it would have been so lovely to spend another day here.To soak in the atmosphere..

We walked back just like the previous team did and it felt Deja Vu when we saw the incoming team. Some of them whom we played games with at Bedhini Bugyal stopped us and asked about the summit. We wished them all the best. The circle of trekking goes on.

Bhim was in his own thoughts and solitude and consciously decided to stay away and I could understand why. I was in the same zone yet when Kuldeep was walking with me telling stories about his life, I didn’t mind either. It was nice to see him opening up and talking.

He spoke about his sister who was the apple of his eye. The joint family he was with doted on her and his sole purpose was to educate her and make her something in life. He was 24 and he was married with 2 daughters. I remember the first older daughter’s name – Deepika.

The younger one was just a month old and they must have chosen a name for her,he didn’t know it yet. Once his treks were done, he would get time to visit his Village at Sari. Manojji was from the same village.

So these guys would be off for treks for months and come back and do something else during winter/off peak season. He was happy he had a job, something to to add to the bread and butter of his family. No complaints whatsoever.

I appreciated how much he opened up about his wife, his kids,  his younger brother, his ‘Badi Ma’- his father’s first wife whom he was really close to and his real Ma. They were all living happily together. Were we living in regression then? They were a lot more open minded than we thought we were.

Bhim would sometimes be in the front, then take a breather, then we would stop and chat and then again go ahead. We were glad we were one of the last ones. Imroze was way back with Mr.Singapore and Vimal for company and the two friends Rajinder and Prashant. We were glad we were away from the noise of the group.

After some time, it was only Neha, Bhim and myself and once a while we would cross Saumya and Gaurav – the Delhi duo who were clicking pics and according to them making a ‘story’ a film out of it. At least they were silent now.

As we started nearing Pathar Nachauni, something magical happened . As we started traversing the rough trails through grass and rocks, we couldn’t believe our eyes.

Bhim pointed out and said what is that?? 4 big animals were hop skip and jumping below our campsite while a local was driving them away! Neha said Maybe Rabbits?? We were like NO!

To our delight it was the rarest of rare Musk Deers! Freaking OMG moment!! Musk Deer and four of them! Magnificently jumping and skipping fluidly all the way down to the mountains.

They were almost on the verge of extinction and seeing them was very rare! No one was around nor saw them except us three! We squealed and jumped in delight! We were losing count of what all we were experiencing so far. It was a moment to celebrate!

I remember our faces even now, flushed with joy and happiness, so many blessings in one day.

We didn’t want to go back to our tents immediately and Bhim echoed our thoughts by saying Time for Maggi? As we reached the Dhaba. We got in, called out Gaurav and Saumya, Rajinder, Prashant, Mr.Singapore and Kuldeep who were behind to join us. It was indeed time to celebrate.

The Delhi duo sat in another dhaba while the rest of us huddled up together. Prashant was initially saying No to Maggi saying this is something my kids eat! We just handed him the Maggi and said Just enjoy it, it’s so different to have Maggi up here in the mountains.

After a good one hour we made our way down to the camp site. But why did Pathar Nachauni look so different now?

It was no longer looking formidable and rough but soft and beautiful. Was the campsite like this before? Then Bhim pointed out nothing changed in the campsite, we have changed, our perspective and outlook totally changed.

For the first time we were appreciating this beautiful campsite.. We just needed to look within and see for what it really was..

We gloated about the musk deers sighting to Manojji and Imroze. Manojji smiled and said See? That’s trekking! To see, to savor, to walk and enjoy the experience not rush from one camp to another. Imroze made a face saying Man in all my treks I have not seen one! Don’t rub it in! 🙂

Even after eating Maggi, when snack time was announced and we came to know it was Chow Mein, Neha and I ate it wholeheartedly. Pihu was sleeping so we woke her up,we didn’t her want her to miss this deliciousness.

The kitchen team truly were making amazing food. Throughout the trek we were so well looked after. From snacks to food to making fresh hot Jalebis, Neha put it aptly, this was luxury!

After snacks, almost everybody retired to their tents. I could still hear Harsha and Vinayak talking to another team outside, well they had that energy not us.

I remember Neha, Pihu and I slept off until we were woken up by Imroze saying come to the dining tent fast! Another surprise!

When we assembled in the tent, what do we see but a Cake! Yup the awesome kitchen team made a cake congratulating all of us! I mean making a cake at this altitude?? It took them 42 whistles, yes 42 whistles on the pressure cooker to cook  a simple Dal(lentils) and they actually made a cake! We were quite overwhelmed.

Pihu cut the cake and we got a generous portion of it. It was a significant day for all of us, truly.

We also came to know about a certain fall out. The Delhi couple argued with Imroze at Bhagwa Basa. As they were always taking shortcuts, breaking lines and not following any rule, Imroze told them sternly he would not take them to the summit if they continued behaving like this.

Instead of toeing the line, Gaurav lashed back saying, ‘If you don’t take us, we will go on our own. We are not in a school’. It got ridiculous. We were a team, a group and the trek leads, guides knew the routes best and our safety was in their hands. To behave so highhanded was unpardonable. There would be consequences.

It was evening and the tiredness got to us. Our body was screaming for sleep and we had one last long day. We would trek from our current campsite Pathar Nachauni all the way to Wan where we started. This was like what we covered in 3-4 days would be done in a day.

Another long day tomorrow with killing steep descents all the way down, the last day of our trek.. 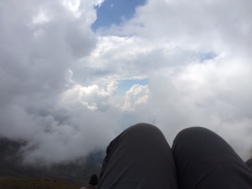