It was a beautiful morning and not that freezing cold when we woke up. The Mountains were doing its own song and dance..

We got ready, did our usual taking down the tent and cleaning the campsite before we set off.

This was a 4+ km trek today and Tanmay didn’t give us a peep of what we were about to see!

The trail was beautiful with fresh meadows, level walks, some steep ascents as Swargarohini peaks followed us, peeping in and out. The best part was trekking on vast areas with the big trees surrounding us. It was a beautiful trek today.

Tanmay’s relaxing attitude and easy way of taking us along was awesome. There were no schedules to keep, we knew we would camp at Har ki Dun for two nights, we did have all the time in the world.

There was a point when we took a break at a small dhaba and as everyone settled in, we saw HIM, by HIM I mean this handsome Mountain Shepherd dog, Bhutiyas as they are called.

He was getting a lot of attention and pampering from everyone. And anyone who ordered from the dhaba made sure he had something to eat too. This wonderful dog would follow us all the way to the end, like all the way..

Tanmay again flopped on the ground while Arun gave him a massage. Arun was in the IT industry and was learning to be a yoga teacher under Bindu’s tutelage and he was so right for it. Soft spoken, gentle, caring and always helpful. Just by Tanmay’s groans and sighs we knew he was good!

As each one zoned off into their space, I sat a little away from the rest, taking in the mountains surrounding us and that’s when it happened.

I heard Archana listening to a beautiful classical Raga and singing in her beautiful voice.. And just like that we sat together and I listened as she introduced me to Marathi Classical music. Until then I never knew Classical Music could blend in so beautifully with the Mountains.. She tuned me to Raag Bhairavi, the intros and it was a whole new world to me. It’s so beautiful you know? The chance to learn and explore something new is such a blessing..

And that’s when I got to meet up close the extraordinary 22 year old wise beyond his years man – Saish. He joined in with us and both sang while I listened in. I closed my eyes as we all three went deep into it. And just at the moment I had tears rolling down, just like that..

The Mountains, the surroundings, the music, Archana and Saish and their voices, it was overwhelming me, totally..What a blessing it was to be right there at that moment.. To be surrounded by the divine Himalayas, beautiful meadows and wonderful people around me. My sunglasses prevented anyone from seeing me crying.. It was a moment for me and me alone..

And then Archana played songs from this Marathi movie Katyar Kaljat Ghusali (A Dagger through the heart) It had 13 songs and it was so out of this world I tell you.

I was pleasantly surprised to hear Saish talk passionately about it too. For a 22 year old he was mature beyond his years and he was the wittiest of us all, with his funny retorts entertaining us, yet at the same time, he had a side to himself that was intense and very observant. He mentioned that he had two older sisters that were much older than him, so he had the chance to listen to all kinds of music.

Archana spoke about her celebrated family.Her grandmother was a firebrand, the first woman ever to ride a bicycle in Pune, she was well respected and when Nathuram Godse was being sentenced to death for killing Gandhi, the crowd went to burn his house and family down, but this lady alone stood in front of his house and dared them to do that over her dead body.

She rightly spoke about how Veer Savarkar was vilified thanks to Nehru and Congress that changed the destiny of the country.

Her mother was a singer, it was in the genes, her father forbid her to sing in public concerts initially, later he gave in. I asked Archana as to why she didn’t follow her path, she simply said, it was not for me, I like singing but not as a career. Her brother was a Tabla artist and he freelances for major stalwarts in concerts.

And I saw Omkar, her son singing too, a beautiful voice and yup he knew classical music.. He had no interest in pursuing singing as a career like her. I was amazed by the Mother-son duo. Here she was coming along with her son for this trek, she had done Manali-Leh cycling expedition, Great Lakes of Kashmir, trekked in the Sahyadris and her son was doing mountaineering courses.

We slowly made our way towards Har Ki Dun. Saish beautifully explained the story of the movie Katyar Kaljat Ghusali, it was intriguing, it was the journey of a man, and what ego does to a person.And just like that I fell in love with Marathi language and it’s music.

We were approaching the valley and you have no idea what it did to us as we saw it. An out of this world Valley surrounding us like a 360 degree panoramic view! I mean Big Snow mountains, trees and Glaciers!!

It was truly Har ki Dun (Shiva’s valley). I just stood still and turned around, like round and round taking it in. Is this for real?? Am I dreaming?? Am I alive?? Yes people, it is that ethereal, it truly is a valley of Gods..

We were all dazed by it honestly. Just dazed and open mouthed and the campsite OMG, right in front of the river stream Supin with the massive Snow mountains.We were in a divine place..

Then we saw other Indiahikers coming back from Maninda Tal, a batch just a day before us. I remember we were cheering them up and they looked at us blankly! I guess people are not used to good gestures sometimes 🙂

We did some awesome silly merry go round exercises and it was fun as we snaked around each other and giggled. This group was super fun!

Finally we had some time to rest or so we thought until Tanmay barged into the tent. Silly comments, jokes, arguments, and mostly Tanmay talking about how girls went for him and the whatsapp messages he gets and his hair and Vidya hitting her head and rolling her eyes, then everyone decided to walk to the other side and explore.

I waited till everyone left  as I wanted some time alone to myself. The campsite was peaceful and calm now. I took my time taking it all in and slowly walked towards the other side. One route would lead to Maninda Tal and the other would be what? I had no idea but I could see others taking pictures. I walked up and there it was..

Massive Glaciers and Big and I mean Big Mountains and the whole valley. It was a painting by an extraordinary artist.

I had no idea that this side was something else again.. Raghu another Solo trekker was with Tanmay, He was Bengali like Tanmay so they were bonding big time. I could see Sharon smiling a bit finally. She was sitting with her guy Vivek and taking in the surroundings.

As some people were going selfie crazy and loud music blaring, I moved away and sat with Tanmay and Raghu, they seemed to want some peace and quiet too..

The Jaundar Glacier seemed to go on like eternity, the whole valley was filled with snow with trees on it and not a soul in sight.. One could look at it forever..

Later I bet with Tanmay that he couldn’t get a  girl to our campsite with all his tall claims of talking up to any girl he wanted to! So Vidya, Semal and I bet him to it. And surely enough he went to the other trekkers campsite with Ashish as proof and got a pretty gal to our dining tent. Well, she knew about the bet and she sportingly agreed as we blasted her with questions until her brother took her away after 10 minutes 🙂

Finally it was time to eat dinner and play Mafia again. If I thought I could retire early, our lead Tanmay made sure our tent had no respite.

He barged in again, trying to impress Vidya and flirting with her(well his version of flirting really!) and there you go, we had more people entering into our tent! Tanmay, Raghu, Amit with his wife Swapnali, Ashish, Vidya, Me and later Saish joined in!

We had no idea how we fit in together in a tent that’s meant for 3! Tanmay showed us we could. With arms and legs in different directions, we chatted for a long time and I mean long time. 11.30 pm is virtually early morning in Mountain time!

Swapnali narrated how she married Amit, he was her sister’s friend and how she took her time to like him, like literally 8 days and 8 hours 🙂 Amit was quiet, witty and very caring and helpful . That night was special.

Each one spoke about their conflicts, dreams and aspirations and Raghu being the Professor in Math from IIT Kanpur gave very logical explanations 🙂

Tanmay told Sharon to be with Vivek in his tent. Finally Vidya, Tanmay, Raghu, myself and Ashish ended up sleeping in the tent. Please don’t even ask me how! Except Tanmay, all of us are tall and big!

I remember sleeping near the foot of the tent at a weird angle and kicking Ashish’s legs sometimes to get some space. I don’t think I even slept for more than a couple of hours, I was just waiting for the sunrise. But it was all worth it. I wouldn’t change a thing about it. What a day and night.. 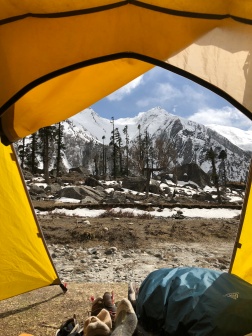 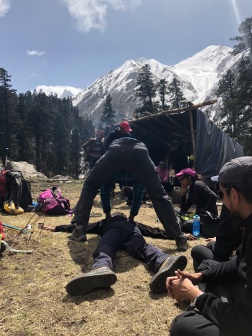 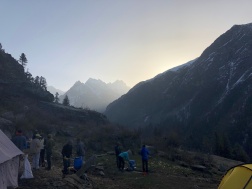 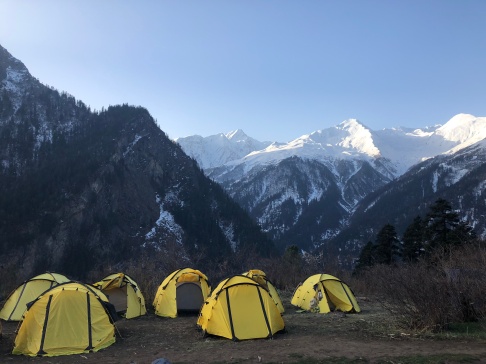 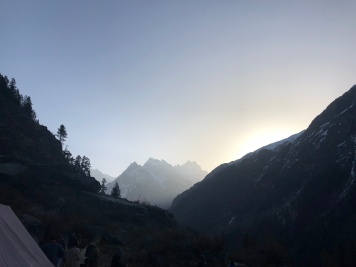 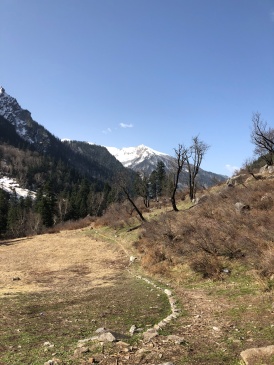