We woke up pretty early in the morning and wondered how to go about it, we again went down and asked the Manager if there was anyway we could get on the road, anything was ok, a truck, a goods jeep anything because as of now all routes seemed closed.

We got out for breakfast and not one place was open, 8 am was still too early up in the hills. As we were coming back towards the guest house, we saw a small tiny narrow place and smoke coming out of it. We asked and thank god the man said Haan Paratha hai(There is food)

The man and his wife served us Hot Parathas with Channa curry.We were pretty hungry and god bless them for giving us food. The women asked about us and she was surprised to hear two South Indians talk passionately about the Himalayas. She said, hum log to kahin nahin jaate, hum Dharchula mein hi khush hain!(We don’t roam anywhere, we are happy in Dharchula)

We came back and the Manager got us new info. There was a man who was from one of the villages near the border and he could get one of his men to take us till the last road but he was charging a bomb, 6,000 Rs because no one had gone on that route post Winter and he would have to come back alone,so he was charging two way payment..

There was a problem, we didn’t carry enough cash and none of the ATM’s from Almora till Dharchula was working. None. We had to make to do with what we had.

We were disappointed and were contemplating. Initially we had planned to visit Munisiyari as part of our trip,  this was a detour and away from Dharchula but Devang the  trek lead had told me this had one of the most scenic landscapes. Should we go that side instead? Maybe the Himalayas didn’t want to us to explore this route, we could go some other time..

We agreed that it’s ok, Himalayas time and again teaches us a lot. We learnt it during Deorital trek when we got caught in a snowstorm and couldn’t summit Chandrashila peak. It felt like a blessing, that we could see, feel and walk in the snow and come back safely so what is this? It’s ok we will not go towards the last road that leads to Panchachauli, so Munisiyari it is.

And just like that when you accept what comes your way, a door opens. One of the assistant from the office called and said there is a guy that is  going that side! He has some Savari(people), some army jawans to pick up from there so you can go with him! I mean this was like 15 minutes into us thinking it’s all over.

We ran down curbing our excitement and there he was, Manoj, a pleasant young chap telling he will take us there. It was a goods jeep and he asked for a fraction of the price! Seriously I believe that if the Mountains accept you, you will go no matter what, otherwise there will only be excuses and obstacles, one has to be blessed and destined to see them.

We packed our backpacks, thanked the Guest house guys profusely and told them we will come back either tomorrow night or day after tomorrow depending on where we stop. We had no idea what was on that side.

We got into the jeep and surely enough within half an hour out of Dharchula, the road turned bumpy, like really bumpy and let me warn you it’s certainly not for the faint hearted.

Bhim and I were enjoying it thoroughly, every moment of it, the unpredictability of our trip was making us happy high! I finally had a friend who liked adventure, didn’t believe in set timelines, no rushing up, super flexible and taking things as they come. No fretting, no fussing, no complaining.

As we bumped along and I mean really bumped along at every sharp turn, deep ridges and valleys, the vista changed and boy how it changed..

There was no one on the still under construction road believe me, no one, we were like these lone travellers setting out to explore. This landscape was totally different from Garhwal or even the Hawalbagh -Kumaon region, we felt like we were entering into another world.

We were chatting nineteen to dozen with Manoj, and he too was opening up to us, he realized we were not the typical touristy people. And the songs he played my god, we had so much fun! Imagine this, Bhim and I grooving and shaking while listening to 90’s hindi film songs!

We would sing loud, taking bumps all along, and I mean it was an every second bumpy route. We crossed waterfall filled routes, driving on the edge most of the time and the few people we saw were construction workers having their tents at the edge and we would narrowly cross in between them.

The song I remember us shaking to mostly was the West Indian Cricket team’s Victory Song Champion! Champion! after their T20 world cup victory.

To hear that song in the most remote of places in Uttarakhand was hilarious! We even did the moves while Manoj amped up the volume! We were shouting DJ Bravo! DJ Bravo!  If you didn’t watch it check out this link! And am warning you it’s addictive!     https://www.youtube.com/watch?v=Y963o_1q71M

Manoj kept mentioning villages we were crossing and it was deserted. Not a soul in sight. The villages itself were unique. All Stone houses and just 4-5 of them and that was a village.

And right there just like that we saw it.. A Glacier… A massive one all the way up.. We stopped and looked up transfixed.We didn’t know where we were and we didn’t care anymore. The present moment mattered and it was beautiful..

Manoj said he would take us as further as we could go to this village that would lead to the glacier, well he would try because he didn’t know if there would be a proper road either and we could hope that someone would be there or some house would be open for us to stay for the night.

He also showed us another deserted village and said a Horse was attacked and eaten by a Leopard in that village a few days ago. The landscape was wild and raw.

After 5 hours of constant bumpy under constructed routes and 90’s Hindi music, we were finally there. Deep in the mountains,not a soul in sight. We were truly far and away from everything.

And there it was. A village, with stone houses  surrounded by  massive mountains.. We were in awe. What is this place? 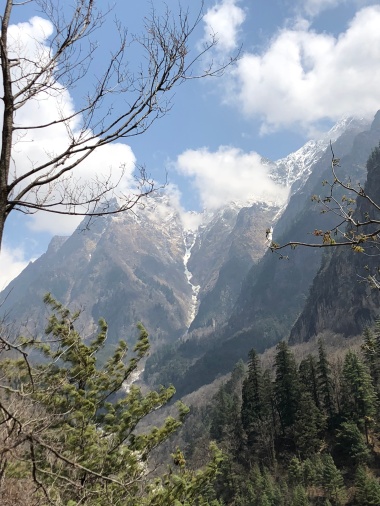 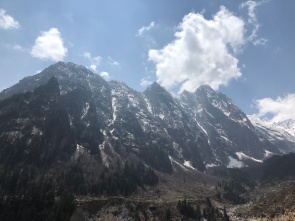 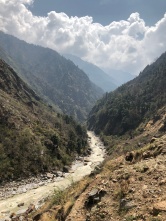 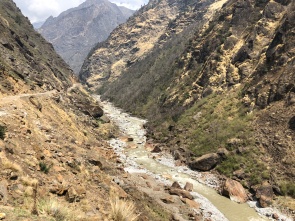 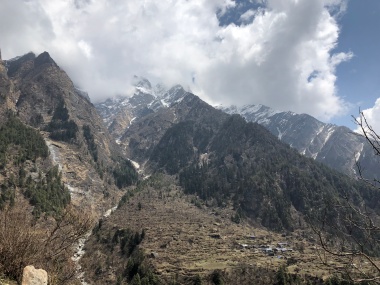 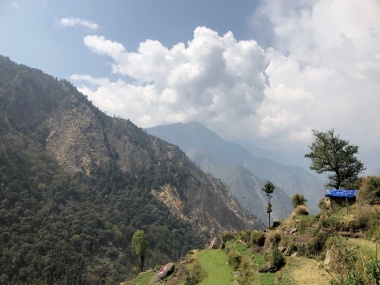