And there it was..

A Glacier, a wonderland with endless snow, completely surrounding us, in every possible way.

The Glacier loomed large and it’s as if we could hop skip and jump to it. We looked back dazed and there were the green meadows and now this?? What the hell had happened in a minute??

We walked further and up, trudging our way towards it, closer and closer and our feet getting deeper into the snow, it was just beautiful.. Who would have thought we would be in a place like this?

The skies were clear and shining and the sunlight falling on the all encompassing snow mountains and glacier.. We were just turning round and checking again if this was real?

When we ascended up, we had absolutely no idea what we would expect and to see this was something beyond words..

We trekked up slowly on slippery small snow slopes as Indian, Gambhir and Manoj egged us on and just like that Bhim made a snowball and flung it at Manoj and me and we started a snowball fight 🙂

It was awesome as we slipped, fell, ducked and laughed as we played along, it was absolute bliss! Indian kept egging us on, telling us to walk a bit further and we were almost touching those slopes.

The moment we saw the slopes, what comes next? Slides! While Gambhir stylishly skied with just a walking stick, Bhim attempted well, Manoj fell and again tried while I sat and slid, my butt was frozen wet but I was too happy to care 🙂

Slowly we moved up and up and further and there we saw the Massive Mountains inching closer, white big slopes and total stillness. It was not windy, no cutting wind chill, nothing, so pleasant with the sunshine and us five. This eclectic group who came together in unique circumstances and now just being there.

Indian pointed out up and beyond and told us there was a frozen lake up there and once the season opened up, one could trek up to that lake.

Indian and Gambhir pointed out the Huge Mountains we saw far and beyond, it was a little misty and if there was more sunshine and absolute clear skies, we could actually see the symbol ‘Om’ forming. We gazed at it, we were so happy that we were actually there. There was no one except 5 souls surrounded by the Massive Glacier..

Finally we all climbed up a big rock and sat there, in silence, all of us, lost in our thoughts and Himalayas do that to you. It makes you be in the moment, tells your heart to be silent, to be calm and feel that nothingness.

The Himalayas, the divine Goddess also tells you when it’s time to let go. The sunshine suddenly turned to wind chill, Manoj first felt a raindrop on him, then me, then Bhim and within a few minutes, it started. Hailstones, tip tip tip and the whole atmosphere changed just like that. Freezing cold and windy.

Manoj said we could wait for some more time but Indian said No, No, we need to respect the weather, it was time to head back and it was a long way back to the village. Bhim said something profound,he said, ‘We have to be so thankful, she held onto the bad weather as much as she could for us, till we got filled to our hearts content and now she is telling us to move on’.

It is true whether you believe it or not, Himalayas communicate to you, always, they tell you, prod you, warn you at the right time, you just got to humbly accept it and let her lead you..

We slowly made our way back, pausing to use the tiny slopes again, me sliding on my butt while Bhim, Gambhir and Manoj skied down.

We kept looking back as we were walking ahead, it seemed to us like the story had just begun for us here. This was not it, this was not the end, we had to explore more, it was the beginning for us with these mountains.

And like that from the Snow filled Glacier, we moved on from the Swampy Bouncy Meadows to the Birch trees filled path where Bhim got a good amount of bark as a memory, to the flower filled meadow.

I remember once we reached the meadow, we gave each other a big Hug, the entire journey was beautiful in every way, those moments couldn’t have happened without the right people.

The Valley was still there, as we kept on looking back, we knew we were not saying Goodbye unlike other places we trekked, this was home. And home is something you always go back to, isn’t it?

As we started descending, we realized we trekked really steep ascents and for quite a stretch! I mean we kept on asking Indian if he had got us on the same path up because we couldn’t believe the ascent we did. It was pretty steep.

It already started drizzling as we were descending so we knew it must be snowing up there where we were just sometime ago.. Wow.. The Himalayas gave us a perfect day and we had a lot to be thankful for.

And slowly we could see the contours of the village, and at such moments you get that same tug at your heartstrings.. Was it really time to go? How did two days and one night pass by so quickly? How?

That familiar ache, that pining, it all comes back.. Maybe it doesn’t go anywhere you know, that pain.. It just stays somewhere deep inside in some corner of your heart and pops out at the right moment..

We saw Gambhir and Manoj collecting a dry branch for firewood and following behind us.. And life in the village is as it is and continues to be..

As Bhim and I were close to the village and getting in, we heard a familiar lovable yelp, it was TIM TIM furball excitedly coming towards us and jumping and prancing, so happy to see us again! Seriously, animals give you affection that sometimes humans can’t.

We were so lost in our thoughts we were going in another direction until little TIM TIM guided us to the right path, yelping, running forward and showing us the way 🙂

We sat at the open sit out in the village as the other two – the Sarpanch and Santu Singh asked us, how was it? Our smiles said it all. Honestly this was goodbye to them, we chatted, took pics and cuddled, belly rubbed and played with TIM TIM.We wanted to see them all again, we didn’t know when.

We went up to our room and packed our backpacks, I remember us sighing hard as we packed, our hearts were heavy, how we wished we could stay back one more night but we promised Manoj we would go back with him and so it was meant to be.

We came down and sat in the dhaba, how things changed from yesterday to today. Indian made noodles and Chai as we chatted and spoke about the heaven we visited. We thanked them profusely because what they did was something we could never repay, neither money nor gratitude was enough..

Bhim and I looked at each other and it dawned on us, this was not a closure, this was just the beginning and we were going to come back here… 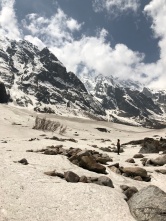 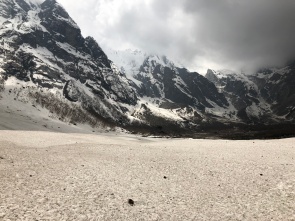 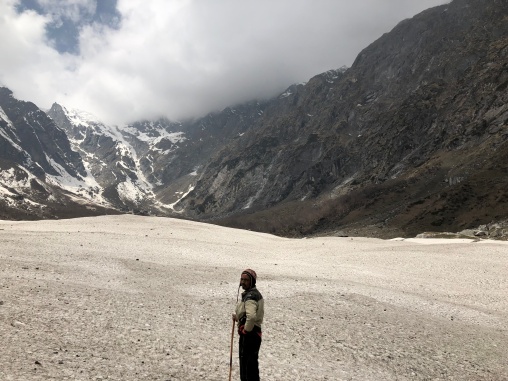 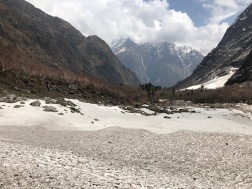