Waking up early in the morning and seeing other early risers followed by chats, silences and the call for tea was becoming a habit now. I lost sense of time. What day was it? Which date? What time was it? I had no clue nor cared anymore. Isn’t it awesome if we could truly lead our lives like that instead of ticking like a clock all the time?

Today we would be going towards the Lower Waterfalls – Dhanderas Thatch. We were slowly and surely inching towards the massive Rupin. Yup the waterfalls, those famous waterfalls that had three levels of which we had no idea of it then but we would know it like a whiplash soon!

Himanshu said the trek today would be ‘nice’, ‘good’ and by now it meant not so easy. He said it was relatively easy compared to yesterday but folks really it was not 🙂 After saying goodbye to our campsite we trekked along the rocky trails with the wide Rupin flowing beside us, really rocky trails almost 45 minutes away from the campsite, we could take a mini break as each one of us settled on the rocks and had our own time off.

Praveen was facing Rupin and he looked at peace , I was sitting on another rock, the Sarala Birla boys were hurling small stones in the Rupin creating ripples, it was peaceful until Rokabhai, Rabin pushed us to keep moving. There were other campsites on the opposite side of Rupin and as they faded away, our ascents began again.

This time through the jungle with ascents. Yup Himanshu was sort of right, it was not as steep as yesterday but nonetheless it was an ascent, you would think you have almost reached the end and when you looked up you would see the others way up there and you could do nothing but shake your head and keep moving.

Trekking is a mind game, a total mind over body tussle happening inside. You can be the fittest, physically strong, the leanest but once the mind starts playing tricks on you, the body can give in and it’s tough.

This I realized at crucial points in my previous treks, whether it was trekking back from Kedarnath with heavy rainfall and escaping a rock fall or Roopkund with the scary Junargali (not scary anymore after Rupin!) or crawling through thorns in the Sahyadris during monsoon or getting lost in the middle of nowhere deep inside Ladakh, it’s that damned mind that one has to work on, always. Get that fit, get that aware and get that moving.

The wonderful thing was that no one cut anyone to get ahead, each one maintained a pace and kept moving, we would huff, pant, rest and again keep moving with Rabin’s Chalo Chalo! or Rokabhai just not stopping in the front.

Himanshu pointed out a gorge in the mountains, they were cut naturally, imposing and enveloping you from all sides, you felt like there was no escape and yet it felt so comforting. He mentioned that certain portions of the movie ‘Lakshya’ directed by Farhan Akhtar was shot in the same location.

As one traversed through the jungle one could see trees, rhododendrons and even the Birch trees, the same ones where the bark was used for writing the ancient epics of Ramayana, Mahabharata and others. I saw it at Har ki Dun as Jyotsinghiji the guide gave us some bark and Bhim and I saw it in Darma Valley.

Slowly I got talking to Rabin, he was from the same village as Rokabhai from Naitwar, the same village we passed before reaching our base camp Dhaula. He wanted to join the army, that was his goal and he was awaiting his 10th standard results. The Sarala Birla boys were also getting along well with him. How beautiful it is was that these lads and Rabin were about the same age with  diverse cultural and economic backgrounds and were bonding.

We were of course greeted many times by the mules, carrying provisions, bags and heavy loads, that familiar tinkling of the bells and sounds of the hooves warning us to immediately shift to the mountain side so they could go ahead.

And like that suddenly you are confronted with this enormous patch of snow, a snow bridge! One had to tread carefully because you were not just going up but trekking at an angle in deep snow. It was a steep ascent up.

The snow was old and slippery and we started going up treading carefully and almost reaching up when I looked back I saw something beautiful, it reminded me of the same quote of Tenzing Norway, looking back I realized how far we had come, Himanshu was like a tiny dot down below in that snowy landscape. Take a look at the pic and you will know what I mean..

We stopped at a point at a rocky clearing with soft water flowing, this was our water source stop. The weather was sunny and cold windy air changing in seconds. I was chatting with Roka Bhai and he said that Great Kashmir Lakes is one thing I must try and he was also thinking of going that side after he finished off with one more Rupin Pass batch after us.

After crossing another big snowy patch we slowly made our way through the clearing and there it was.. It hits your senses when you suddenly see the Valley opening up like an Open heart! The visuals were breathtaking.. I could feel myself out of breath just looking at it.. The vast meadows,the greenery and there was the waterfall way ahead, we had a long way to go but what a sight to behold! The valley was V shaped and it was a perfect painting.

What is this feeling every time? You might have gone a zillion times to what you think is a similar landscape in the Himalayas and yet so different. Every single time it takes your breath away. Every time.. We were walking towards the campsite, one of the prettiest in this trek so far and there we could see the waterfalls. Looking so near and yet so far..

We saw stones placed on top of each other on some rocks as we went along and this is a familiar sight. Himanshu told us that if one was on a solo trek and got lost, these stones were placed by previous trekkers to let them know that they were here and they could use the trail,  amazing right?

We got the best campsite on a vast meadow  with the Rupin river flowing wide and far, the water was coming from the glacier way up there. There was already another Indiahikes batch  a little away from us. They came here a day before and they would move onto Upper waterfall campsite tomorrow.

The dog from Dhaula was still with us and I was getting worried seeing her follow us all the way until Praveen mentioned that it was normal for her. He found out that she usually came with the porters and their mules and she would go back with them. From here on, no mules would go till we crossed the other side of Rupin Pass, there would be only porters carrying heavy loads.There were a couple more Bhutiyas at the campsite and they happily scampered towards us.

After the usual stretches and lunch, we relaxed for a bit in the tent, listening to songs, chatting up. We would be at this site for the next two days and nights. They called it ‘acclimatization’,I thought this was only for acclimatizing to the higher altitude until..Well wait for the next blogs on what all we had to do the next day and the day after and the day after that 🙂

In the evening we all gathered and finally played the game ‘Mafia’, yup that same game that becomes so addictive that the team wants to play only that game every single night! After explaining the rules, we started off! Himanshu played God while Kiran gave his valuable comments and feedback based on our body language! There were accusations galore on each other, he shifted, she shifted, he is quiet, why is he so quiet? Pathetic acting, Liar! Oh! he is so defensive that’s why! and all that jazz 🙂

It was time to call it a night and tomorrow we would start a little late,no need to hurry, no need to pack up, all easy peasy because we would have an ‘acclimatization walk’.  By now you should know that Hell ! in no way was it a walk! 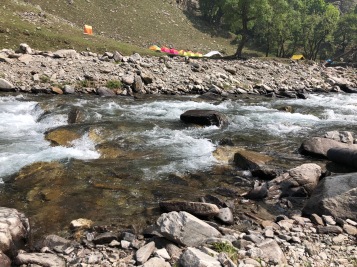 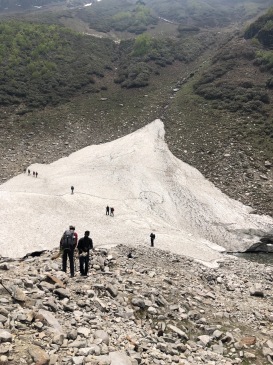 One thought on “Lower waterfalls it is.. – Part VII”