We woke up lazily that Sunday morning looking at the sea… It seemed like a dream that we were here amidst the swaying coconut trees, the sea in the busiest of cities..

Sunday is always lovely which ever part of the world you are in, well most countries that follow the Sunday Holiday rule. There is a lazy air about it, people are relaxed, roads choke up less and we were in one of the most beautiful parts of Bombay, and before Kashif our friend reads this and says You should come to Navi Mumbai, let me say yup, next time buddy, will be there that side 🙂

But for now, we were soaking in everything. The place we were staying at had an incredible energy, a calm energy about it that made us not want to rush and get out.

We had a whole day to go and we were all set to meet some of our friends but first Breakfast! I had to show Bhim Mondegar cafe !

Yup the iconic cafe that is as famous as Leopold and even though people say it’s over hyped and all that balderdash, let me tell you, your trip to Bombay is incomplete without visiting the above ones. An old world cafe that has the legendary Mario Miranda illustrations all over it’s walls. It was one of the themes that inspired the cafe I used to run not too long ago, yes.. how time flies..

We chatted over Baked beans on toast(definitely Bhim’s!) while I hogged on poached eggs, toast and crispy bacon. I remember when I was ordering fruit juice, Bhim promptly said dude! Juice?? Why? let’s go for beer! and so we had that too! And that’s the spirit of the cafe.

We saw all walks of life stepping into the cafe as we sipped, chatted, ate, joked about Tinder, listening to 80’s songs on the jukebox, it was blissful.

One had no idea how time passed by and that’s what good places do. One does not need loud music, apps, phones nothing when one has an awesome company. I will also give credit to the awesome people of Bombay and their spirit. To be in the moment, a no nonsense attitude at life and yet not showy or flashy.

Kashif our friend called us to set up a time to meet for lunch, since he was the Navi Mumbaikar(yup that’s what we told him 🙂 ) he suggested a place at Kurla which would be half way point for him too.

We met Kashif on  Rupin Pass trek in May. The poet, soulful eyes and a heart of gold. These are the things that come to my mind when I think of him. Soft spoken, a tinkling laughter saying Arrey! and a guy who cares a lot about the people he loves.

Finally we made our way out of the cafe, came home(it felt like one already!) and got out to Kurla. Once we made our way into the mall, there he was, a complete transformation! We saw Kashif rugged with a beard during the trek and here he was all Chikna ! (seriously I don’t know how to translate this!) and we teased him about it.

He took us to a middle eastern restaurant called Khiva and we chatted over kebabs and parathas and delicious curries. And this is where I stop telling more about what we spoke about, because dosti mein to secrets hota hai na?? (In friendship, secrets are kept!), he regaled us with the misadventures he had, the drama of it that was equivalent to a Bollywood movie!

Bhim did some bird watching with Kashif sweetly and politely nodding to his comments. This man is seriously meant for another era 🙂

And here is the thing, we had met Kashif on the trek just a few months ago and I felt like nothing had changed when we met him again. Sometimes it does become different when one is up in the mountains to when one goes back to a routine life, back to their city, back to the mould they are used to, but not with our mate. We were a happy bunch alright!

Saying a warm goodbye we made our way to Uma’s home, where Saru the caretaker and literally a family member of the house greeted us. We had previously met Saru during a workshop when she accompanied Uma and her mom there.

An incredibly warm person, very frank and direct, she made us good strong coffee as we chatted with Uma. She remembered our rendition of bad corny 90’s songs Bhim, Bharat, another friend and I sang post the  workshop 🙂

Just as we were about to go, who walks in but this awesome woman Uma, another Uma that is! I had met her a few years ago and she is one hell of an inspiration. Pankaj in fact egged me onto trekking narrating stories of Uma’s solo treks.

She started trekking in the 1970’s, yes the 70’s on her own in the Himalayas, The only woman in the 1983 batch to take up mountaineering course at Nehru Institute of Mountaineering.

She shared her adventures, hitch hiking in the middle of nowhere in the Himalayas, camping on her own, getting into unknown villages and staying there for a night. Her eyes sparkled as she spoke and you have no idea what it did to us, we felt so alive, energetic and we were missing the Himalayas already even though we were there a few months ago.

She had to stop because of a hip injury and she told us only one thing, ‘Just travel, trek trek and more trekking to the Himalayas’, don’t waste a moment!

Giving big tight hugs to both the ‘Umas’ and wishing there were more women like them in this world, we made our way to meet Pankaj at Mahalaxmi Race course.

The Race course was a little more than a kilometre from the apartment and Pankaj had given us his bike for the duration of the trip so off we went to meet him. It was dark by now and Pankaj had already done his rounds so we joined him as we chatted along. The race course was perfect and I made up my mind to run here during the trip. It’s always a pleasure to run in a different city.

After spending some time with Pankaj, we got ready to be picked up by Sid. But first can I stop here for a moment and say how awesome are our friends? We were getting pampered by each one of them!

Sid picked us up and took us to the famed CCI(Cricket Club of India) and we made our way to the bar. Sid and I savoured single malt whiskey while Bhim had his beers. Over wafers, peanuts, Chilli Paneer and more drinks we chatted and laughed loud as we spoke about men (what else?),women (what else?) and life 🙂

It was another beautiful day and we felt like we were in this trance, a dream and we didn’t want to come out of it..What else was needed?

Well, certain things would happen during the trip that would make us gape, open mouthed and get a chance of a lifetime! Read on! 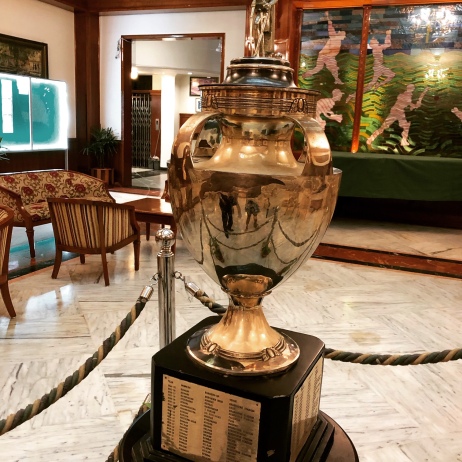 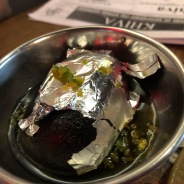