It was our first day of the trek. At very early hours in the morning Priyanka and myself had managed to wake up and answer nature’s calls before it got crowded.

This was one of the significant things about trekking. Sharing spaces, having patience and when everything becomes a communal sharing kind of thing, one tends to value those things we usually take for granted.

We saw Kinshuk in the doorway and nodded. Our beds were right in front of the door so whenever anybody got out and opened the door, we felt the full draft of cold air so sleep was haphazard.

We started getting ready and this was my first ever and I really mean my first ever experience of seeing the gals dressing up, wearing eyeliners and lipsticks before starting a trek!

In my few years of trekking I saw no one like that and to see this was a sight. I gaped as I saw the girls patiently moisturising, setting up their hair, wearing lipstick and at that time I felt comfortable only with Priyanka to ask her, Babes? Lipstick?? Eyeliner?? Why?? Very sweetly she said Arre, why not? One has to look good for pictures na?

That my friends was my introduction to the glamour gals of Sandakphu 😊 Over the next 7 days of the trek I would be amazed at the perseverance and patience of the gals dressing up well and it didn’t matter if it was -10 degrees!

I saw a completely different side of what a trek means to people, individually and uniquely in this one. And as I said to a friend earlier, just because I have a certain perception of what a trek is, it doesn’t make anybody else’s less or more. That’s the way it is and one has to accept that.

Maybe I was the misfit and this usually happens, just that I didn’t get to experience it until this time!

Tanmay meanwhile was doing his trek duties as a trek lead and getting distracted too. I mean it was Déjà vu for me.I didn’t sign up for this repeat performance but it was getting to be one.

I was seeing what I saw last year. The flirting he thinks he is good at, aiming at one particular person later turns to obsessing, singing exactly the same songs, exact same comments, exact same praises and on repeat mode till the end of the trek.

It would be Har Ki Dun 2.0 version except that this time he wouldn’t completely get his way and he would have to compete with the others for the damsel’s attention. But why am I writing all this?

Because in hindsight it takes away some of the intended energy of the trek. And yes myself and a few others faced a certain scary situation while trekking in the last days that could have been avoided if the lead had given his attention to people who really needed it at that time.

No treks are perfect but let’s face it I would rather be honest and call a spade a spade than add a glossy shine to it.

We started our trek initially on a motorable road and then Bharatbhai the guide detoured cutting across the mountain trail.

It was going to be a 11 km trail and we started ascending our way. We cut through the forest  and it was a steep ascent to begin with. I paced myself slowly and kept a distance. I preferred being last because there is silence, and while it’s good to talk with other trekkers I liked being quiet on and off.

Talking to Priyanka occasionally, to Saikat who was with us throughout and a calm Darshan choosing to talk when he felt like it, with his camera and no fuss about it, it was beautiful.

What do I remember about that day as we trekked? That feeling of familiarity and yet so new.The Eastern side of Himalayas were so different from Uttarakhand. Saikat was right, there was something here, this side of the region. It felt like we were crossing a painting, very subtle with all the light colours yet so vivid..

I could hear Pravin’s signature laugh as he kept clicking away to glory, from his friends Revathi and Sujitha to others.

Then I heard the cacophony of two Kannadiga Bangalore boys, and this would continue till we finished the trek.

At one point when we took a break we were right in between Nepal and India. It was a surreal moment. The Gompas, The Old  temples and the rolling meadows, the scenario changed just like that.

The air was getting colder and after a few breaks we were again on the motorable road leading to Tumling, Nepal.

Conversations happen and sometimes conversations about life and it’s complexities happens and it’s easier to do that with someone  you just met because there is no knowledge of your past nor any judgement.

I remember Darshan and I had a lovely conversation on life, loss, to move ahead and move on. This is the beauty of a trek isn’t it? Each one comes with such enriching experiences, through them we learn more about ourselves.

Finally we reached Tumling and we were assigned to our rooms. It was a five bed one so Bhavana, Akshata and Reshma were with me and Priyanka. I came to know them better. Akshata was married to Bhavana’s brother and Reshma was a close friend of Akshata and they had met each other at Tarsar Marsar trek.

While the evening soup was getting ready, it was getting bloody cold and Priyanka and Saikat bravely went out in the dusk to click pictures. I didn’t have the patience nor endurance for that so I stayed put near the kitchen. Darshan went out and came back saying he couldn’t feel his fingers, it was aching.

And here is the thing, Sandakphu is the most luxurious of all treks! Accommodation were only in T houses except only one night when we had camping. Five to six of us with an attached bathroom and that was such a privilege!! So if you want to experience luxury then Sandakphu it is.

My Roopkund and Rupin Pass mates who are reading this, yes we went through a lot of ball busting hard shit didn’t we? 😊

It was the usual  group games and that dreaded game ‘Mafia’ started, don’t even ask 🙄 I needed some time out from the group so I opted out and so did Saikat.We were chatting with Bharatbhai and Subashbhai near the hot coals stove giving us some warmth.

Subhashbhai spoke about Northern Sikkim,the treks and the lakes and it was fascinating.  I would slowly know the funnier side of Subashbhai as days went by.

I also remember having a nice short conversation with Harish from Chennai. This man was quiet and spoke only when he wanted to.

Tanmay chose to come to our room, like save the best for his last to take oxymeter readings so he could meet and spend time with the damsel- Reshma. Yes we teased him, we laughed at him and he was enjoying all the attention and yes it was exactly a repeat of Har Ki Dun, only the girl changed.

Tomorrow would be what I hoped another beautiful day, and this time in Nepal.

And the most important thing, a little fiery angel came into Manal’s life and heart and in turn into our lives too. A four pawed tiny tot with a wagging tail and lots of love. But by no means did she think she was tiny and she taught us a lot. Her name was Doofy/Nimmu depending on who called her and she would be a huge part of our journey. 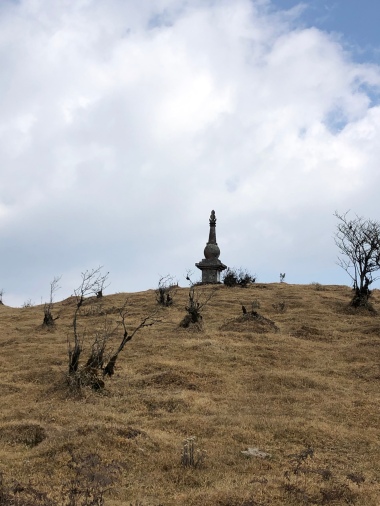