It was early morning and we were getting ready. I had my train to Guwahati at 9.30 pm and Suvadeep’s train was at 9 pm and we were the only ones rushing back that night so we had to reach Sepi by afternoon. From Sepi, it was another 5 hour drive to New Jalpaiguri station. The sooner we start the better it was.

We woke up to a small ruckus early morning and when I came outside I saw Doofy was trying to get into one of the rooms and all doors were closed so I picked her up and she was back in the girls dorm.

Now one thing about our  Doofy girl, she knew how to maneuver her way. She made friends with almost all the dogs wherever she went and I have a sneaky suspicion she was the leader of the pack!

As Manal mentioned in the message group, for her it was like I am leading you and I am protecting you guys, not vice versa 😁 She was a survivor, an year old already, she wouldn’t get bigger than the tiny size she was, so she really knew how to survive,how to thrive and how to get around. She was a Supergal!

It was another trek of 15 kms but the staff was smart enough to not mention the distance knowing how much it could tire us mentally, they only said it will take 5-6 hours. One thing was on my mind, it was about Doofy, what about her? She had come all the way from Tumling. Tanmay said he will be taking her back to Jaubhari with him, the base camp.

She was used to this and she would again walk with the next batch. I only hoped the next batch would be as loving. Seriously we loved her so much and we really got used to her snuggling next to us, giving her hugs,kisses and cuddles and she was worth every bit of it. She was there from the long walks to freezing temperatures.

It was time to move on and then it happened,the illusion broke.The vision,the handsome vision- the Chaiwala passed us sitting on a ‘kachhar'(Mule).In broad daylight, post trek recovery he looked.. well not the stunning vision we saw last evening. Priyanka and I laughed and looked at Revathi, and she smiled saying See?One needed that mood, that ambiance and that right moment.😊

We set off and we passed through the forest again.It was beautiful as we passed brooks, waterfalls and bridges. I guess the body was knowing the pounding it took for the last 7 days, aches and pains started in places. Manal and I chatted on and off and moved ahead. Priyanka and I had shared so much that it didn’t feel like we met only a week ago. I was going to miss this girl terribly.

And as we descended closer to ‘civilization’ out came off the layers of clothes, the jackets, the fleece, the double layered shirts, it was getting hot, we were closer to the plains and the mountain weather up there seemed like a dream. Right then we realised something, we stank! These past 7 days being up there was different and now walking towards the plains we could feel it. Manal was like my own stink disgusts me, she was right, we were all stinking! It also meant reality, the reality of it all.

I got talking to Revathi this time. We had a long conversation and walk discussing everything under the sun. A fellow Gemini. She led her life exactly the way she wanted and believed, ‘One life, no regrets’. She spoke about her life, her family and friends and how she got misjudged because of her openness and straightforward views.

At one point, Melbourne Sunil, Revathi, Priyanka and I kept talking, bantering as we trekked. From the serious stuff to the light flirty stuff, from feminism to relationships.

During a stopover for Chai,Amel sat with us and as Priyanka chatted with her about her life, her views,Amel listened in and am sure she was struck by how innocent and simple she was.I really prayed for Priyanka.This girl had gone through a lot already and she deserved so much love.

I looked at the Vista surrounding us. Did we really crossover and come from the other side? It seemed so distant from another time. The network was working, so out came the phones as everyone called their loved ones.

Sujitha, Priyanka and I had a lovely conversation during the last leg of the trek. Soft spoken,inconspicuous, she has this soothing energy about her. No fuss about anything.

After what looked like never ending,we finally reached the bridge that led to the motorable road to the Sepi guest house. We were dead tired, the sun was beating us down.

The moment we reached the guesthouse, Priyanka and I put our backpacks aside and got out to take a couple of puffs and it felt so good. We had a super fast lunch. Tanmay told us to take this particular driver Pemba who would drive us to NJP in 3 hours.

Revathi gave me a sip of the Millet Beer she was drinking and it was heavenly but we had no time to sit and chat.

I said my goodbye to Doofy. The little one looked lost amidst the cacophony in the guest house, there were people hurrying, eating and the atmosphere somehow changed.It was different now. Tanmay again assured me that Doofy will be going to Jaubhari.

After lots of emotional hugs and big thank yous to our guides, Kinshuk, Darshan, Saikat, Priyanka, Suvadeep and myself got into the jeep.

In the jeep, we spoke in depth about the trek, our views on it. The heady rush we had was now dipping and after sometime we were in silence. We dozed off  for sometime and everything felt like a haze, we were existing between reality and dream. The whole atmosphere felt soundless.

Our driver Pemba was one chatterbox entertaining us all the time. From Darjeeling Strike to his encounters with the cops to Mamatadidi, the situation in his village,he was a tell all. We were feeling the full force of the trek now.

It was dark and I was getting worried if we would make it. I already started thinking of alternatives, what if? Should I go to Darjeeling? not go to Meghalaya and just go to Guwahati or go somewhere else? I had fever and it was increasing, would I be able to take it? I sounded it out to Priyanka and she said, No, you will reach on time and you will go to Meghalaya and I will meet you once you are back in Calcutta!

Darshan had major motion sickness and he wanted to throw up but the caring guy that he is, he felt that by stopping the vehicle, he would delay us all. He was holding onto his nausea for us! We told Pemba to stop and let Darshan take a break. He felt little better after throwing up.

We stopped briefly for some Momos and Chai and my girl gave me her woollen gloves saying keep it, you will require it there, I will take it later.

Finally we reached the station, hugged big and tight and as I saw the jeep leaving with my mates, I felt this sharp stab in my heart..

It was time to go on a new journey, to move ahead. 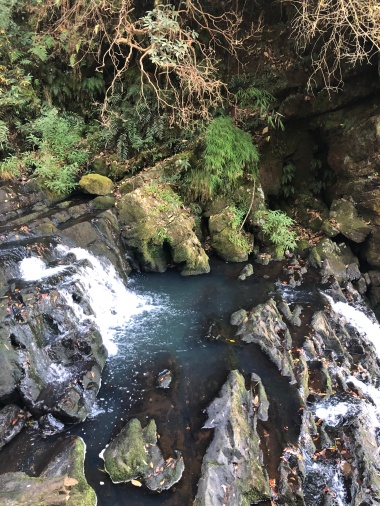