It was a smooth ride once we got into the bus. And when I say smooth I  mean the dexterity and finesse of the driver. The roads are pretty rough, very narrow and the vehicles teeter on the edge. The drivers were Gods. Focused, patient, smiling and ever so present. I have never felt as safe before as being driven by them.

The landscape was now stark. The Mountains showing its magnificence, different colours, different hues of blue, grey and brown and unmatched blue skies. I was open mouthed in wonder. It truly doesn’t matter how much one travels to the Himalayas, every time you are star struck.

Finally we reached a point where we stopped for lunch. Sitting outside, the pleasant guy from ITBP joined us. He was from Meerut, he got married just a year ago. They were going to Sumdo. They were all joining their new posting there.

Sumdo was a pivotal place. Bordering with China, it was an important base for ITBP. He said that if one went on top of the army base, they could see villages in China and of course completely off limits for civilians and heavily guarded.

He spoke about his life, his family, his last posting until recently was in Dharchula in Uttarakhand. That evoked a lot of memories in Bhim and me. One of the most memorable treks we explored on our own was towards that side last year. It was also one of the routes to go to Manasarovar. We had gone there when the winter had just about ended.

He was a part of the operation that was sent to rescue foreign mountaineers attempting to summit the massive Nanda Devi. A group of foreigners along with a few Indians made an expedition to the holy mountain range. So far no one has successfully summited it.  Special permissions were required and the locals considered it sacrilege to climb this range, they regarded it as a holy Mountain. And yet, we puny humans want to ‘climb and conquer’.

Four were rescued while the remaining expedition perished. He said the bodies were still there, it was impossible to lift them up. He also mentioned one Colonel from their battalion who attempted, he almost reached the summit but had to come back due to bad weather and on his way back lost his life.

Decades ago, the CIA( Central Intelligence Agency – USA) had placed a nuclear device to monitor China’s mission launches but the device got buried in the mountain ranges and they couldn’t retrieve it back so a large part of it has been cordoned off.

Nanda Devi was the patron goddess of Uttarakhand and there were so many legends, folklore on her and it still is enigmatic and mysterious. Time and again the holy mountain range has been giving big signs not to climb her and yet… Some things were best left revered and untouched.

On a lighter and happy note, he spoke about his wife. She was working in Dharchula as a Liasion Officer when he met her for the first time. With a shy smile he told us she saw him first, approached him and wanted to marry him. It was so sweet watching him blush as he related his love story.

We kept teasing him about it. He only said, ‘Nahin ji, maine to kuch nahin kiya, bas usne pasand aa kiya’( I didn’t do anything, she liked me). He sent her photo to his family and they only said, if you are happy we are happy. He showed us her picture. A stunning girl she was. We were like how could you refuse her? 😊

Such conversations enliven up a journey for this is what matters not the destination. What I hold close to my heart are people like him, their openness, sharing something so personal from their heart.

It was time to get back into the bus. The road was narrow and the landscape was captivating. The greenery was almost gone and replaced by barren wilderness.

We crossed Khab Sangam – the confluence where the Spiti river joins the Sutlej river coming all the way from Manasarovar lake in Tibet. The bus slowed down as we watched. Khab village was another place we kept as an option to stay but with no bus routes and it’s inaccessibility, we let it go. We were almost reaching the end of Kinnaur region. Spiti Valley would spread its wings of magic on our way to Tabo tomorrow.

The bus stopped at Nako and the Bengalan lady I guess was still trying to make her case to stay there but Swamiji for the time being put his foot down for Hurling.

Finally it was time for the Indo Tibet Border police force to get down at Sumdo. There were big signboards at Sumdo prohibiting anyone to click pictures of the ITBP base. Saying a big goodbye to all of them in particular to our very special friend, we wished him all the best. As the bus moved on, I saw the force already standing in lines and starting their reporting process inside the protected area.

There were few passengers in the bus and in the evening, we reached the small hamlet of Hurling. We thanked the conductor and driver profusely and bade them goodbye. The conductor told us there would be a bus to Tabo which would stop around 12.30 pm tomorrow, we could take that.

We got a lovely room at a homestay the moment we got down. We could also negotiate with a local to take us to Gue temple the next morning, there were four of us so it worked out pretty cheap.

But Bengalan aunty was super pissed off the moment she got off the bus. She kept shouting at Swamiji, at everyone in general as to what is this place. They could have stopped at Nako and on and on. Plus the way she was talking to the locals was downright rude and it was irritating us.

When you travel to a place, respect the people there, maintain etiquette and be polite. The first rule of travel is patience, if you don’t have it, you don’t deserve to travel. And especially in the mountains, the people are polite and respectful and this woman’s demeanour was rude.

She kept on saying ‘ Ye kaunsa jagah hai, Hurling ka naam hi nahin suna, koi nahi rehta hai yaha’ ( What is this place, no one has heard of it, no tourists are staying here) Bhim retorted ‘But we are staying here, shouldn’t you be happy you are staying at a place where no one has? You can tell your friends you stayed at a new village.’ But yeah most of them don’t get it..

Here we were, incredibly happy being in a new place. The people were very nice, the room was unbelievably comfortable considering the price we were paying and we were going to the temple tomorrow, what else could one want?

Seeing her energy, Swamiji started hanging out more with us. He was tagging along with us but we were kind of done with her, her whining was dampening us. We were like, our journey ends with them at Tabo.

The sun was setting around 6.45 pm so we decided to get out and explore and yes the two joined us. We crossed bee harvesting units all made with stone. Swamiji asked us about the treks we had done. We asked him about his ‘cave experience’ in Gaumukh but he didn’t seem to reveal anything. He would mumble something.

By the time we came back to the village it was dark, there was no electricity. Our Aunty was grumbling about it. Honestly we didn’t require electricity. The air was pleasant with the chill setting in. After having dinner, we tucked into our warm blankets and went into a blissful sleep.

A new village, a new destination and the promise of another wonderful day. To be continued.. 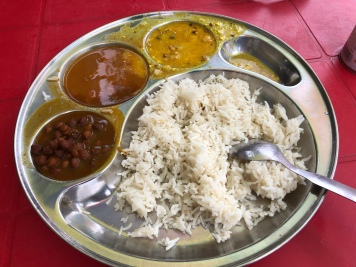 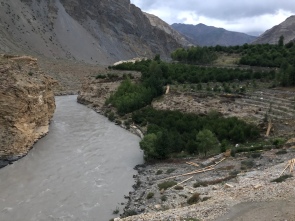