And so it was. Question Swamiji with his bright orange shirt and Bengalan Aunty. We didn’t seem to escape them😁

He walked towards us with a smile and arms wide open as if to say we are caught! Bhim quipped It’s her Magnetic Mala, you guys seem to be pulled towards it! They found a group of Bengali guys and shared a vehicle that would give them a tour of Kaza and some villages and would take them to Manali. Aunty had to get back to Chandigarh tomorrow.

We were happy they finally found their kind of travellers, the sightseeing kind going click crazy. Aunty seemed a little frazzled. Swamiji mentioned they had to stay back one more night in Tabo as the evening bus to Kaza never came.

It was clear we didn’t need to hang with them so we made our way to the monastery for some food. We were asking for the Lama or the handyman, then another traveller told us to come into the kitchen to eat with him. He was from Singapore, he was a part of the group that was staying in the monastery, VIP guests and because of instructions from the top order, accommodation was not given to anyone else except to them.

But the moment we came in, another worker told us we were not allowed in the kitchen with the guest and told us to sit in another room with the monks. And so we did.

We got our plates and this time we got a stuffed pasta kind of dough steamed with a soup like curry poured over it. We didn’t have forks or spoons to eat so the kind monks gave their cutlery and took out matchsticks, yes matchsticks as a fork to eat the dumplings! Seeing that Bhim also used matchsticks to eat.

We were chatting with the other monks in the room. They had travelled to Bangalore, Bylakuppe – the second largest Tibetan settlement in India. We shared our experiences in Spiti with them. Thanking them,we made our way out when we saw the Lama, the same one who had given us dinner yesterday. He gave us hot tea and asked if everything went well. We thanked him profusely for his help.

We told him we were going tomorrow, made a donation to the monastery and mentioned that we were waiting for Karan. He smiled and said, He will come very late tonight or maybe tomorrow, he is usually like that.

We came back to an empty cafe, there was no electricity so we used whatever little natural light we had to read. Asking the Bihari assistant about his master’s whereabouts was like talking to a wall. Totally zoned out guy listening to music on his headphones.

The few visitors that came to the cafe were going back thanks to the assistant’s way of answering questions. It was like this, Guest: Chai hai?( Is there tea), Bihari : Hai (yes), Guest: Milk chai hai? (milk tea) Bihari : Nahin (No) Guest: Aur kuch hai? (anything else), Bihari : Na (No). We were laughing, anyone else running the cafe would be around but Karan vanished like thin air!

All the while we were concerned about how to pay him back. It was two days and two nights of stay and food. After waiting till 10 pm, we went back to our room and kept the door open hoping we would hear him come in.

Ours was a dorm room with 4 beds and no one in besides us. Next door were some guys and pretty loud, especially some foreigner talking non stop. We were packing our backpacks and chatting, then Bhim pointed me to something behind him. It was little Noorie, the furry pet of Karan.

Where would the poor girl sleep now? She was used to sleeping in his room and his door was locked. She was yelping, with her front paws on the bed. She was too little to jump up. So Bhim put her up on one of the empty beds.I could see Bhim’s eyes filled with tenderness as she lied down and he kept petting her to sleep.You have to love animals to know how tenderness feels like. If you haven’t loved or taken care of one, I truly pity you..

Bhim made a nice puffy space filled with blankets for her so she could be warm. We switched off the lights, kept the door open in case Noorie wanted to leave if her Dad came in and slept off. I drifted off into deep sleep when I felt something warm near my legs, what the? It was Noorie! She was nicely snuggled next to me. She was at such an angle that I couldn’t move much. Seeing her so comfortable I didn’t move either. She kept inching her way up until she finally came under my arms and so Noorie and I slept like peas in a pod that night 😊

Waking up to those big brown eyes looking at you is a feeling that’s unexplainable❤️  Bhim said that he had made space for her in his bed just in case she wanted to jump in.Well what to say we both go gooey and mush when it comes to dogs 😊💕

I woke up with stiffness and body pains thanks to my immobility and it was all worth it. Norrie was stretching and contorting in my arms. She was in bliss. Bhim got out to check if Karan was back. The door was locked. Where was this crazy guy? Anyone else would have been concerned. There were guests and there was money due! It was so easy to just walk out.

Finally we got ready to go. Noorie was up and about, prancing in the monastery with her furry big mother. In fact last evening she had taken Bhim’s slipper playing with it and threw it somewhere around the school. Bhim kept asking around and finally found it! She was a little devil 😊

We packed up and were waiting for the bus. It would stop right in front of the cafe. Bhim woke up the assistant, gave his number to him, took Karan’s number and told him to tell his master to call us. The guy just nodded. It seemed like we had to follow up. The visitors started trickling into the cafe but there was no owner so everyone had confused faces 😊 Karan was one maverick, for him it was not business, if he was around, it would happen otherwise not.

As the bus came in, a foreigner asked us if this would go to Kaza, we nodded. He was staying next door in the cafe and yup he was the loud one. We got into the bus and saw it was the friendly driver and conductor who picked us up from Tabo. Saying our hellos to them we sat down. We looked back at Key monastery longingly.

In no time we were in Kaza, it was only 9 am. The guy who came with us from the cafe was Marcos. He was staying in Kaza for the night and taking a shared ride to Manali tomorrow. We wanted to stay at the villages. There was Langza, Hikkim and Komick. Almost everyone suggested we stay at Langza and then work our way up to the other two villages.

We also had to figure out how to get to Chandratal. The only way was a shared ride with the budget based on how many people took the ride that day. Everything was uncertain now. And the bus to the village was at 5 pm and we had a whole freaking day. We couldn’t afford another taxi. And that’s when Marcos came in and so did a certain Pasupathi! 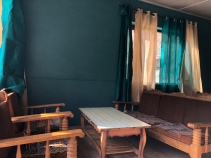