We woke up early morning to a beautiful view. Sitting in the balcony in silence we took in what was in front of us. Was this real or was this a dream?

The Mountains, the calm energy with no one around and the blue skies. Bhim saw a ladder that went up to the roof so we climbed up. One could get a 360 degree view of the place. There was a nice nip in the air. It was so peaceful, I felt like we were suspended in time..

Last night we decided to not rush to Kaza and get to Chandratal, why not spend a night in another village tonight? That’s the effect Komic had on us. Everyone thought of the villages as a stop gap but we felt Spiti was in its villages, it’s spirit and essence existed right there.

We came down from the roof and relaxed in the balcony. Tenzing was up and about and greeted us. It was past 8 am already and we saw the monks doing ‘pradakshina’(circumambulation of holy places) starting from the old monastery to the new monastery and getting inside the altar. It was a beautiful sight, prayer wheels, the orange yellow maroon robes with the chants reverberating.

I remember there was silence after that and everything felt so surreal.. That thought did come, did we have to go back?

Bhim and I were chatting and I remember talking about our childhood in the 90s and listening to songs that we used to sing aloud and having no idea what it meant and how scandalous it was.

There was a song La-La-La Long La-La-La Long by this reggae group Inner circle. I remember playing this loud and singing and my mum getting angrier when I used to belt it ‘Push it Push it some more!’ Bhim asked if I had that song on the phone and I did so we played that song and danced on the balcony! Completely into it, in a far off place like Komic, two kooks played reggae and grooved to it 😁

After some time we came down for Chai, Tenzing was sitting with his friends. He asked us if we went for the prayers, we said No, he told us to go the new monastery where the prayers continued.

We went to the new monastery with the monks chanting and praying. And again when we were about to sit in a corner, the monks signalled us to sit next to them on the seats. The monk whom I saw playing carrom board last night with the villagers was seated next to Bhim. He saw us and smiled.

As we went deeper into the prayers and chanting, we were served butter tea and bread. Memories of Key came up and now this. It was us, the monks and a senior Lama reciting on a mike and monks playing instruments. The whole experience was how do I say it? It felt like we went back to those olden times, hundreds of years ago, sitting right here.

After some time we came out and looked back at the monastery, that moment.. How much we would miss Komic. It was less than 24 hours since we were here and yet I felt we were staying here for days.

We were taking it easy, just extending our time in Komic. We would be staying in Langza tonight and according to Tenzing not too far so if we were there around 5-6 pm it was good enough. We had breakfast sitting out in the sun chatting with Tenzing and his friends. A happy friendly playful bunch, they were teasing each other about their driving skills. There was only one old small car in the village they used for running errands.

And as one begins to get really comfortable in that peace and quiet, balance happens. A sudden rush of vehicles with tourists came in. And I mean sudden rush. A bunch of confused Maharashtrians rattling in Marathi, the Delhites that will never break stereotypes, a melange of proper tourists.

It was noon and the energy changed to noises, conversations with the tourists coming in like a storm. We were really happy for the locals, it meant revenues for them. But Komic was a pit stop to them, all they were asking was, will they get fossils from Langza and where is Hikkim- the highest altitude post office in the world.

We moved aside and looked at each other. It was time to go wasn’t it? Komic had given us the perfect stay we could have ever asked. Solitude, quietness, landscapes, chanting with the monks and to meet guys like Tenzing. And like everything else, this too shall pass for it was time to move on.

I got ready while Bhim went to pay the room dues and as he came up he said Good we are getting out, these fucking tourists are creating a ruckus. And it was true, the noise was unbearable, we could hear it in our room. Selfie sticks, click click click, talking really loud, not respecting the environment around you. Murphy’s law prevails as usual.

We were ready to go, we said a warm goodbye to Tenzing with a lump in our throats, we felt such camaraderie with the guy that he asked us emotionally, Aap wapas aaoge na?( You will come back here) What do we say? I had no idea what the future held, if Spiti was there in my life plans again, but Komic would be a place I would visit come what may ignoring the rest of the villages if I would ever step into Spiti again.

Tenzing told us we had to get to the main road then after a couple of kilometres we would see small trails cutting across the mountain, we could take the short cuts and it would hit Hikkim. Waving at him, looking back longingly at Komic, we moved ahead. For life is like that too isn’t it? 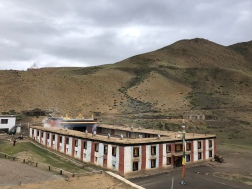 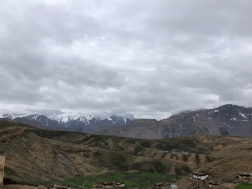 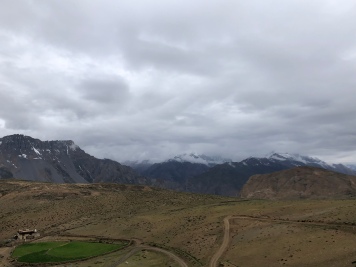 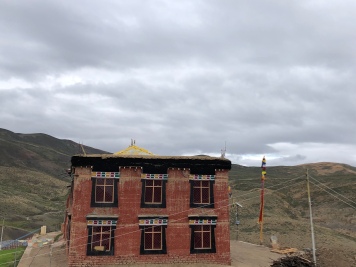