When I look at that moment, that time in the temple premises it feels déjà vu, like I have done this many times before in several lifetimes, why I don’t know..

Sitting under the sun listening to those soothing voices  chanting ‘Narayana Narayana’ and Bhim’s voice beautifully singing ‘Govinda’ standing next to me and in front of Badrinath, it seems like I have been there, with those women and with Bhim in my previous lifetimes. I can’t explain it nor there is a logic to it.

The more I go through life the more I realise that every person we meet, encounter, glimpse has a previous karmic connection with us. It’s as simple and as complicated as that. It all depends on how you look at it. For me? It’s simple, clear and beautiful.

Going back to that day when we made our way out to walk that 2 kms to the landslide area, we got our first blessing. Bhim saw a man with an empty vehicle and asked if he could drop us till the landslide area. He readily agreed.

This was not easy as all the vehicles were pre-booked by families for the journey. The man was really helpful in giving us info on how to get back to Rishikesh the next day. We were very clear that we are not taking a bus back, a smaller vehicle to Rishikesh would be perfect.

We reached the landslide area, the police were directing people to walk down, climb up and reach the other side of the landslide and take a ride to Badrinath. We could get around but what about older people whose last wish was to see him? How difficult would that be? There were small palkis( palanquins) precariously held on backs by thin small strong pahadis and taking them up and down. God bless them, it was a pretty tough task. Uphill downhill, carrying luggages and people to and fro.

I saw a sea of people walking on the precarious landslide prone area filled with rocks and watching out for falling rocks from above, some with luggages, heavy ones, walking with thin sandals, sarees, it was unbelievable.. We were fit and strong but how about the others? The desire to see Badrinath was so much in people, they were willing to risk anything.

As we walked on the stones filled area, right beside us was the gorgeous Alaknanda river flowing with gusto, in her bloom with the misty mountains adding a heavenly effect to it. We paused looked around and smiled at each other. This is why we did the things we did, to get a glimpse of this. One had to fight, toughen up, push to the limit to feel this..

We made our way up on the muddy slushy narrow path, there were people going down and coming up at the same time and one had to watch out, be careful and think about everyone. Once we came on to the other side there was chaos, total chaos. There were fewer vehicles and people were more. Each vehicle took in 10 people but there was rushing, pushing and running around and even the drivers were getting fed up.

Finally we banded with a bunch of fellow South Indians and got into a vehicle and were finally off to Badrinath.

What we experienced so far seemed like a dream now.. The route to Badrinath was rough yet so beautiful. It was a different world altogether, scenic magnificent Himalayas, narrow roads with gorges. Everything seemed different and this was just 22 kms away from Pandukeshwar.

All that pain seemed to vanish away.. Bhim mentioned the events around Badrinath, the cave where Veda Vyasa divided the Upanishads, Mana – further away from Badrinath and the last village of India. He had been here before 2 years ago with his Uncle.

In my heart I thanked him for doing this trip with me. How often do we get that one friend who does this perilous risky journeys with you time and again unflinching?

Finally we reached Badrinath. Bhim asked for directions to ‘Anantha Mutt’ which belonged to his sect. Bhim belonged to Madhwa Brahmin community, a sect that traced their origins from Kashmir. There was a purity in their way of life and the rituals they followed. What I found most heartening was Bhim embracing his origins completely, not discarding them in the name of being ‘cool’. One can be liberal and follow their own beliefs and religion. One need not be discarded for the other. Unfortunately nowadays we are forced to take a side.

We went to his Mutt and I waited for Bhim to change. Let me tell you it feels so good to see a South Indian dressed in traditional robes. Wearing his dhoti and simple shirt reminded me so much of my father when we used to visit Guruvayoor temple in Kerala 💕 He walked barefoot all the way to the temple. It was 500 metres away.

As we were nearing, my heart skipped a beat, Bhim pointed out, there he is, there is Badrinath.. 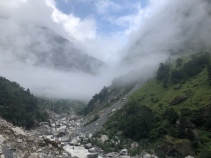 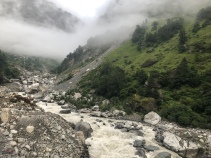