I woke up in the morning from a blissful sleep after what seemed like ages.

I could see the staff at Innisfree were up and about and started their chores for the day.

This is the most beautiful thing about homestays, you see people doing their work, you see the action behind the scenes. Lovely smells emanating from the kitchen, the staff going about cleaning the place, the whole of it.

Deepta and Arjun stayed back at the homestay on Julia & Lat’s insistence, it was too late (by Hawalbagh’s standards) to drive back home. Their home as I mentioned was way out there. They were already up and about and hanging outside the house.

As usual, the moment I sat, Lat made sure I got a steaming cup of Chai, I was getting totally pampered here 🙂

Julia walked in with her million watt smile handing me another cup of Chai with cookies! I was thinking whatever little weight I lost during the trek, I will be adding on more after this!

I also got a chance to meet Harsh, Julia & lat’s son. Intelligent super active boy and well mannered. You could see his parent’s upbringing. He had this mischievous curiosity in him.

The need to learn more, know more and he was a proper Pahadi boy. Physically strong at that young age and so into what his parents were doing. He lent a helping hand in his own way, He knew what was happening and his parents instilled in him what hard work means.

He would be constantly interacting with the staff there, asking, talking and I saw Arjun was a role model for him and rightly so.

Arjun gave him some mathematical problem to solve and he was racking his brains the whole day. I was thinking what a difference from today’s city kids.

Granted, he was in an ivy league school but grounded to reality. He was seeing his parents toiling every day to make this home stay happen. Ditto with their daughter who created beautiful artwork on natural stones inside the homestay. Each one hand painted and unique.

Lat started talking about their family ancestral house away from where they currently stayed. It was a huge ancestral place that they lived in before and now they decided to sell it off.

As he said, no point in gloating over the past, one had to move on with the present. This home stay too was on a lease from the government and they got just a year lease on it. So every year they would renew it based on the government’s dictum.

I saw they invested quite a bit on it even though they said it was not really major work.

The love and passion they put in that place was unbelievable. My room and the other rooms were so beautifully furnished with that touch of home and luxury mixed in.

The old ways were gone and one had to adapt to the new ways. Julia mentioned that hunting was so prevalent among the royalty and Thakur clans those days, it was a sport even if one cringes now at the thought of it. It was a norm those days. But one had to change and they did and even the local community had to change. There was not much wildlife like before.

Hawalbagh was a small place and Lat was well connected with the community, they looked up to him and he and Julia along with Arjun and Deepta were looking out for ways and means to make the locals understand about sustainability and environment problems.

The same thing, with the kind of trash being thrown by the locals, plastic bags, bottles and no respect and going along with so called development, they were trying to seek a solution, build an awareness among them keeping the culture sensitivity in mind.

Lat would never talk negative about any person, this I observed, he saw the positive side in people. That’s a rare thing in a person.

I loved the fact that all of them were ready to work with whoever was in power. Gone were the days of protesting because in the end one has to see how to work within the system and get good output than just lamenting.

Arjun was liasoning with the locals, to know more, their livelihoods, the local issues and to see how they could contribute to the community. He  built an effective WiFi network in this remote place. It was called Cowmesh – a tongue in cheek name if you know what I mean 🙂

I remembered him putting up photos of building a  cost effective WiFi network at this place on Facebook, now it all made sense.

Arjun and Deepta in that process also realized that they need to get paid by organizations who had money. It was not good to be idealistic all the time. They got their first cheque for a project from an organization since their office was set up and they were pretty happy. It was a small amount but it meant a lot. It taught me a lot too. Their life was simple.

Julia brought in a fantastic breakfast of Omelettes, Buns, fresh orange marmalade, banana cake and I am drooling as I am writing this, her home made Caramel sauce!! Oh my that yummy caramel sauce I can write poems about! Fresh fruits, Toast, Chai, Caramel sauce. We were sitting out in the open and eating.

Time passed by just like that..This was heaven. Cola would keep us amused whole day as Deepta and Arjun kept a watchful eye on her and Fuchka while we chatted.

I got a chance to meet all the the dogs Julia & Lat adopted. Almost half of them were rescued from near death and brought back to life with lots of love and attention. Julia was the loving and stern mommy to them all, using her Hindi and English in good measure to toe them in line.

I always saw Julia tirelessly working, day in and out. Like she would be talking to me and pulling out weeds in that huge outdoors. I would join in sometimes, observing what she was doing and hoping I am not pulling out the good ones instead of weeds! Her mind was always on the move thinking of how to do multiple things at the homestay.

Arjun and Deepta would be pitching in ideas and together they would brainstorm. Right now, their pet project was to make  a home made incarcerator that could burn all the plastic – totally environmental friendly. Harsh was on it with the staff with Julia giving in her inputs.

They believed in doing something first here, succeeding at it then implementing it to the community slowly. It was a baby step, a first step and they were trying hard.

Their lives were not a bed of roses as Julia said and I knew and understood that.

It was not dreamlike which people mostly think, running a beautiful homestay in the hills and waking up to see beautiful sunrises and sunsets. It was sheer hard work.

Living in the mountains had it’s pitfalls with it’s remoteness, isolation, water & electricity shortages and transportation.

Julia tried her best to keep her cool running the place, to make it efficient and Lat was the go- between him and the locals and the government. The kitchen from which all the great food came from required her supervision all the time. She was meticulous in almost everything.

We realized we had so much in common as we swapped stories of running a place. The same story everywhere, just the place and people were different.

I remember Arjun, Deepta and Julia were nodding when I was telling about our guests ‘grievances’ at the cafe, run ins with the government officials, bribes to police pressures, internal problems, this was a norm when one had a business.

Finally I met someone who really understood where I came from because believe me no matter how much I explain running a hospitality business, only someone in that same situation and passion mind you, can fully comprehend the horrors of it.

All of us were really not into making pots of money if you know what I mean.. This was life, this was our whole life doing what needs to be done, to follow our passion and to see guests being happy and satisfied. Julia & Lat were exactly that.

In a way, we all were connected with a common thread. An off beat path,all of us, countering mainstream in our own way.

I would be reading a book in between but more and more I would keep the book aside and listen to Lat, Julia, Deepta and Arjun talking about something or the other. It was refreshing to be a part of it, to listen, to share experiences.

Along with it was the local ‘Bhang ki chutney’, yup Bhang(poppy seeds) is indigenous to the region, growing wild everywhere. And for dessert there was a Khoya dessert called Singori which they wrapped in a local leaf called Maalu. They truly were spoiling us!

We sat again around the bonfire, looking at the moonlit night, drinking Rum as Lat was the perfect host refilling every time, Arjun and Deepta casually passing smokes as we looked up to see the sky in all it’s benevolence.

Maybe it was my imagination but sometimes I would hear a sound or something and I would ask Julia, what’s it? She would smile and say some wild animal, worry not.

When I think about it now, even now, more than a month since I left Innisfree and it’s people, not a day goes by when I don’t think of them. It was like family.

I knew when I go back I wouldn’t get this affection nor warmth back in my home city, certainly not like this..I was not just a guest at Innisfree anymore. 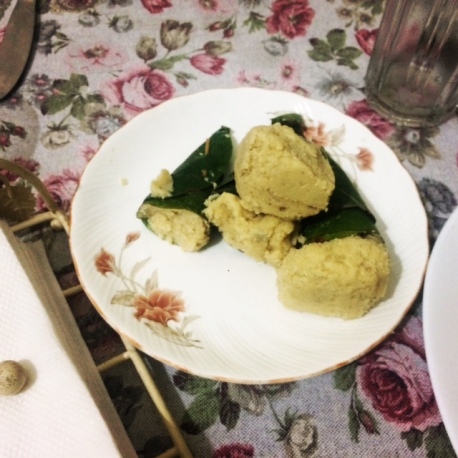 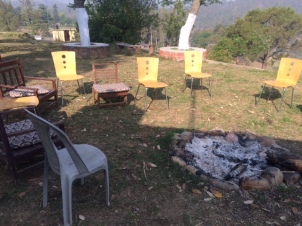 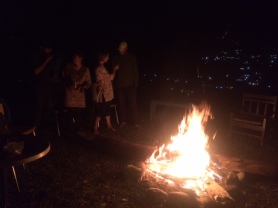 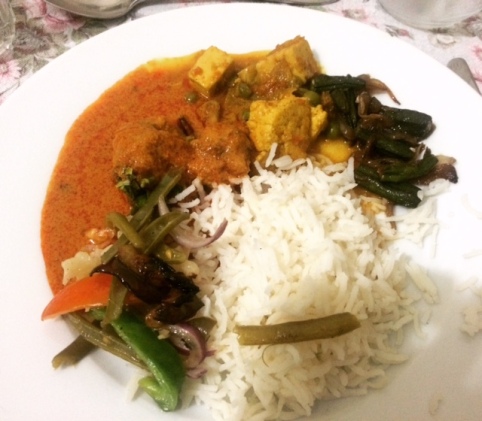