We got down at Haridwar at an early hour, around 3 am and sleepy eyed made our way to the bus stand to go to Rishikesh. Then we took an auto to Dayanand Saraswati Ashram at Muni ki Reti and thankfully got a room at that hour.

Even though I had called the concerned person at the ashram for a room previously and he said it was fine, I was not sure whether they would let us in at that time, the security man was kind enough to let us in.

We just crashed to our beds and slept till 8 am. We had just a day and by day I mean 3 pm before we could head to Dehradun airport and there were very specific things we had in mind and no detours from that!

Bhim and I got ready and started our walk from the ashram to the other side of the Ganga, all the way to Ram Jhula but instead of using the streets, we walked along side the ghats and it was beautiful as we did a full circle of it.

We walked, we talked, we relaxed and we knew this trip wouldn’t end until we took our flights back home and we were so present, really present and in the moment.

We had a not so great breakfast at Chotiwalas yet the atmosphere made up for it. It was early in the morning with most of the shops yet to open and the tourist season hadn’t started yet.

After that we had to take a dip in the lap of Mother Ganga. Bhim took me to this Ghat which was peaceful, clean and really quiet and you could hear the rip roaring currents, it was flowing and strong. There were strong iron chains to hold on to while you take a dip, there was no other way to do it. Like Bhim said, hold the chain like your life depends on it, if you let go, your body will be found in Haridwar 🙂

I had never taken a dip so this was truly like an initiation as Bhim led me to it. I gingerly held onto the metal chain and dunked myself into cold water as Bhim helped me and held me in there. I managed to do it somehow and I saw Bhim completely going in and feeling the near freezing water. Yup at 9.45 am with the full sun out, it was still very cold!

Right after that dip, we sat near her and a whole sense of calmness set in. Feeling her in us, we felt absolutely at peace.

Silence, meditative and self contemplation. We closed our eyes and she seeped into us. It was such a warm loved feeling I tell you.She was the mother, the all encompassing mother, how could one not feel her benevolence? Time stood still for us as we meditated prayed and it was really tough to drag ourselves out and get going.

Now we had a long walk to go to our ‘shrine’, the temple as we called it. The first time I had gone there was last year with Jogen, a dear friend  and needless to say I fell absolutely in love with it, like hook line and sinker and after that it has been a must do  visit whenever I was in Rishikesh. Bhim went in June last year and yes it was the same for him.

Bhim and I are big fans of the 1960’s, their music, the culture, the revolution, we had spent many hours listening to music of that era that was so ahead of it times. If not for that era and those people, we wouldn’t be where we are right now. The 60’s of America and UK brought in a breath of fresh air. Out went the double standards, hypocrisy, people had a voice, they questioned the government, vietnam war, the power standards, status quo, the stuffiness of it all. And one band catapulted into limelight, who else but THE BEATLES.

If I were tell you that THE BEATLES were only about music, I would be totally wrong. It was the people, their thoughts how they revolutionised an entire generation of Baby Boomers post World War II.

Each one of the Beatles, be that John Lennon, Paul Mccartney, George Harrison and Ringo Starr, they brought in their own distinctive personalities and thought process. And most importantly the whole band and their songs were about universal love, the love for oneself, for friends, the consciousness,humanity as such. Why am I telling you all this?

Because THE BEATLES visited Rishikesh and stayed in Maharishi Mahesh Yogi’s ashram in 1968 and that’s the ashram we were going back to again and again. Our love for the Beatles and their music and the abandoned ashram was a temple to us. All we had to do  was to take in the energy that existed and boy does it exist there!

As we walked up, we felt that tinge of excitement and peace like we always did, a big smile on our faces. There was so much peace and solitude here and thank god not many knew nor valued this place, definitely not our fellow Indians and we were glad about it. One had to feel connected to this place, spiritually and to the music of Beatles to get the whole energy of this space.

We climbed up to one of the beautiful stone domes which was previously inhabited by the disciples and sat there for quite some time. A view of the beautiful Ganga and Bhim and I chatted, about our lives, our past and sometimes be in silence.

The whole world was at a standstill for us. Nothing else mattered other than NOW, this moment, this very second. We could feel every breath, every ‘Shvaas’. How complete it would be if we could do that each and every day of our lives rather than just have moments of it..

We slowly got down and went towards the main hall where meditation used to happen those days and to our horror, all the graffiti, the beautiful eclectic artwork  done by hippie artists, wanderlusts all through these years was completely replaced by some obscure paintings commissioned by the government.

We were disappointed and didn’t stay further in the hall but this also has to be accepted, as change is the only constant thing. We consoled ourselves, we were so lucky to see all the graffiti  and murals done right from the 70’s until last year by various artists around the world.

That art work was a labour of love where they jumped the wall (forbidden at that time) and painted at all hours unlike this. We were thankful. Truly thankful.

We noticed there was also a cafe now! A new building starkly standing out among the beautiful old stone homes, well this place was changing wasn’t it? Another reminder to the self.

We were thirsty and it was a welcome respite as we ordered some Chai and Water. I started playing THE BEATLES SONG, ‘Here comes the sun’ and it was so out of this world I tell you.. To hear all these songs created during those times and us being in the same place as they were.. Bhim got up and grooved while I swayed, just being ourselves.

As we grooved, moved, relaxed and listened, an older white woman hearing us play these songs, got surprised and asked us, ‘So you like these songs? Your parents listened to them?’ We nodded Yes. Thanks to them we were mostly who we are now.

If not for my mom, I would have never known The Beatles nor the Rolling Stones and so many more. I looked up and remembered her.. I did miss her a lot.

We checked the next door gallery where they exhibited the entire set of photos taken during their visit. It was a step back in time. To be there at that moment, to be free of race, creed, colour and be a spiritual being and that kind of thinking existed in the 1960s. Wow…  how have we come down so low after that..

India is something isn’t it? The country, it’s length and breadth, it’s geography, the cultures, the people, it zaps you to just imagine the sheer diversity of it. I felt truly lucky, blessed and privileged to be born in this motherland.. To be in this divine land that shows you what YOU want to see.

I remembered what a dear friend Elana told me once about India.She said, India is like this Mirror, a stark mirror that strips you bare, raw and naked, removes all that you held onto for years, your titles, your labels, your ego, everything and shows who you truly are and it’s up to you to take it or not. So either you will LOVE India or HATE her totally, there is no between emotions. So bloody true.

We started walking further o those 84 stone caves used for meditation and relaxed at a clearing and got a beautiful view of Rishikesh with her Ghats and the Ganges and listening to THE BEATLES.. There was silence and so much unspoken words yet everything was understood, it just was.

We walked further, escaping the local couples of Rishikesh who were using this as a nice adda(hangout) to spend time and click pictures. We finally reached a spot where John Lennon, Paul Mccartney would play music during the early morning hours right after meditation.

We sat near the steps and Bhim played more songs of the Beatles and he started dancing and grooving, and I joined in for sometime, we didn’t care who looked, who stared nothing, we were in our own world, transported to that time as we laughed and swayed to the music.

The energy of the place was pulsating. It’s true, people might physically leave the place but a piece of their souls do get left behind and we were doing the same here, leaving a piece of ourselves here. 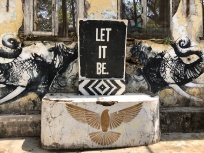 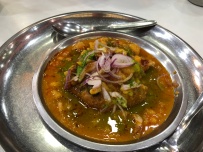 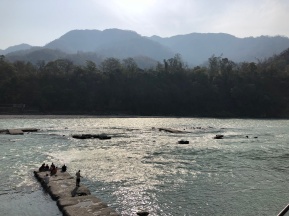 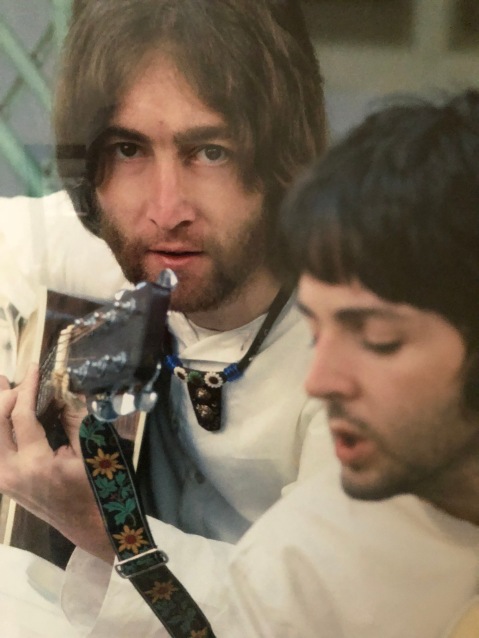 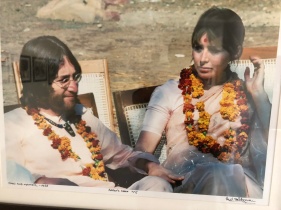 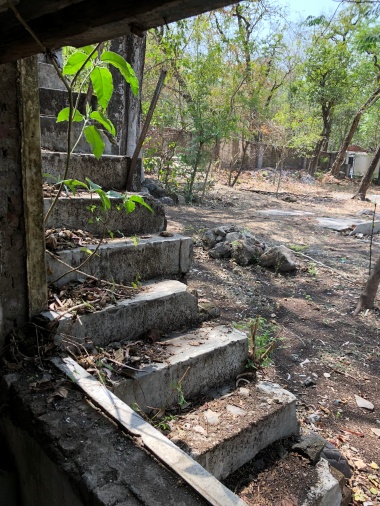 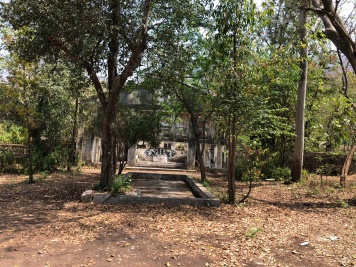 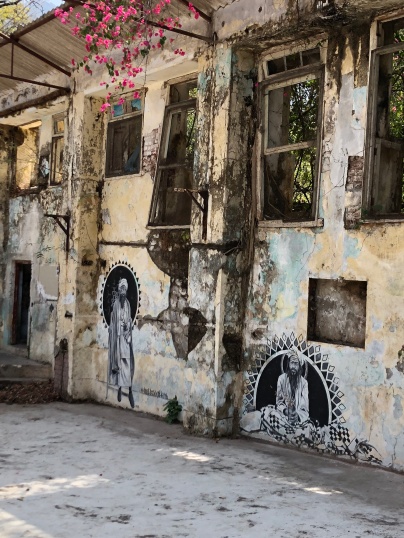 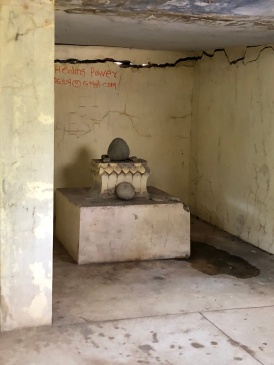