There are seconds and I truly mean seconds between life and death.. Sometimes it’s a choice, sometimes its circumstantial..

You know the adage, Life flashing before your eyes? I had two instances like that. One when I fell off a motorbike in a twenty foot ditch and would have rolled over to a valley if not for my left hand clinging on to a branch at the right moment in Bali,Indonesia and the second instance was this..

The mind plays tricks, it takes over you and at that moment I wanted to let go, end it all.. why this pain, why this suffering, why? I remember staying there and wondering it and all this happens in seconds.. And nothing matters that time, neither your loved ones, nor your past, nor your events, nothing comes to mind except you and that moment.

Superheroes are everywhere and they will never be in flashy clothes in real life.. Rokabhai, Rabin and the porters who saw our condition, our sheer fear, panic and stuck in between the rocks came like a force.

I remember Rokabhai goading me, holding me by the hand and telling me to climb up, no matter what he kept telling me you have to reach the top! He would pause, then help Nirvi, Pooja and others and again help me climb up. These guys had only one mission: We had to safely reach the top and with no casualties.

I remember at one point, I couldn’t take it and said Rokabhai Haath chod do, mere se nahin hota, ab bas! (Rokabhai, leave my hand, let go off me, enough!) and he said jab tak aapka haath mere haath mein hain, mein aapko nahin chodoonga(As long your hand is in my hand, I am not going to let go!) This my friends is sheer human spirit.

It takes this much to give up. Give up life, give up hopes and I realized that moment how we were tottering between life and death. All it took was to let go off it..

These guys, these superheroes were hauling, helping us through heavy winds, telling others where to place their hands, their legs and goading, encouraging to only climb up. No going down, no falling down nothing! Today no one would die! They were determined in every way.

The poor porters with 30 kgs load on them left their load and started rescuing others, pulling them up. The winds weren’t stopping but getting stronger and the human spirit was getting stronger with each gust of wind. Whenever there was a rockfall, we would duck, close our eyes and hope we wouldn’t get hit by a big rockfall and this was happening continuously, no respite for a minute..

Rabin yes that 17 year old kept hauling people up till the top and again going below to rescue others.. If this is not human spirit and selflessness, what is it tell me?

I remember  so many incidents others spoke, what happened to them and all of us almost touched death. Nirvi remembered how after hauling me up, Rokabhai used his other hand to haul her up at the same time. Pooja’s visions of death was haunting her again, especially after the Fire incident that almost cost her life, it was the second time in 6 months and she could see her dead friends images flashing before her eyes. Rabin took her bag and hauled her up.

Amish, Neel, Shravan and others were all face down for 20 minutes on the rock with slippery freezing ice and nowhere to go. Amish particularly remembered that moment when Rabin said imagine how our Army guys must be facing the borders and Siachen, that was a motivation for Amish to climb up no matter what.

Advaith was helped by one of the porters who unloaded their baggage and helped them up. I remember him saying  I saw the porter, he barely had any layer of clothes on him and here he was selflessly rescuing us in freezing temperature, in that crazy windy weather with rockfalls. He gave one of his sweaters to him.So many stories came out..

Himanshu was stuck badly between the rocks and the 14 kg backpack he was carrying was pulling him, killing him. He didn’t wear the spikes either so he was slipping.He waved at Rokabhai to help him but Rokabhai took it as a normal signal and waved back. Then Rabin noticed and came to Himanshu and hauled him up slowly removing his backpack.

It was Himanshu’s 38th trek as a trek leader.He was a mountaineer and had done so many summits and when he recalled he said This was the toughest summit ever for him. For the first time, he faced death, he faced out most fear and he was sure there were would be casualties today, there would be deaths.

The Indiahikes team were not prepared for this in any way. For the first time in Rupin Pass, they faced such strong winds, rockfalls which none of the previous teams faced.

So maybe we were the chosen ones, we were destiny’s children and had to go through it. If Himanshu said this was his toughest most challenging summit, then yes we were destined for it, we were the privileged ones who saw what can happen when things go awry and what it takes to survive through it.

If not for the kindness of Himalayas, we would have all been dead, our bodies hurled in different directions with our loved ones not even getting to see a last glimpse of us.And I mean it..She protected us, gave us challenges, gave us near death experiences and changed the course of our lives.

Now most of us had reached the summit and it was so much more windier now! We were together yet we couldn’t hear anyone, the winds were blowing hard and strong and we were trying to hold on to our balaclavas, scarfs, everything was flying about.

It was so cold I tell you, we all huddled up in order not to be blown away at the steep descent. Then Akash- the Sarala Birla Boy had the guts to just stand up, facing us, legs wide and arms open wide and feel it all. As we saw him, he was using his full strength to feel what life has to offer, what Himalayas was offering..

And like that from near death we touched life again, hope again, and we looked up and saw around us on the other side.. Snowy landscapes and steep descents and the only way to go down was Slides! Yes Slides, sliding all the way down to a few hundred metres.

Within minutes how life changes right? From that challenging terrifying experience we experienced the glee and enthusiasm like kids as all of us slid down, all the way down on the snowy landscape! Some were sliding alone, some in pairs, some in fours tumbling sliding down and laughing! As we stood up, we all hugged each other, smiles came back, we laughed we jumped we huddled and high fived! This day was something we wouldn’t forget in years!

Then Kashif narrated one of his own poems. Being a shy private guy, he never shared his poems but at that moment, it was needed, for him and for us. And he narrated a beautiful poem, ‘Never see me Fall’ amidst the winds and looking back. It welled us up.

There was another slide and another walk but Bhim led the way by sliding all the way down and we all followed suit. I remember the redness, soreness and burn on my back when I slid on this one and it was all worth it 🙂

Himanshu mentioned that we couldn’t stop here anymore, the weather was getting worse and we had to move NOW, so we started our trek back, all descent as we shifted from snowy landscapes,a no man’s land for a couple of hours to rocky landscapes and the first sightings of green meadows and water.

From that windy unforgiving pass we were smacked by bright Sun, flowers and meadows as if nothing happened. The hours that we faced became a thing of the past. The body and mind doesn’t know at that moment what happened, it’s in a state of shock and so it continues but we would slowly understand this only in hindsight..

When we reached a lunch point in the meadows, most of us crashed upon reaching it. The body and mind was tired and aching and we were trekking continuously from 5.15 am with no breaks.

As we sat and opened our Tiffin dhabbas, I had enough of Roti and Beans and Dal and whatnot. Bhim had got some Tamarind Tokku(pickle) from his house and I demanded that he open it right away! I gave all that beans vegetables to Neel along with Roti, I just wanted to have one roti with pickle only. We shared the pickle with everyone and that first taste of spice and pungency hit us! Aaaaaah, this is what the body required!

Slowly and surely as we started walking along, none of us spoke about what happened except asking how further it was and how the landscape had changed completely. Kiran was back to his normal joking self again. He was calling our next Campsite Rontigad as Ronigaand(asshole) 🙂

And there it was, the Kinnaur region and the shepherd with his goats, rolling green meadows and our campsite down below.

We reached, threw our backpacks and plonked flat on the grass, just flat.. No words, just silence from all of us, taking it all in.

And I remember playing this poem from the movie Zindagi Na Milegi Dobara with Farhan Akhtar’s  soothing voice, ‘Toh Zinda ho tum'(Then you are alive)… 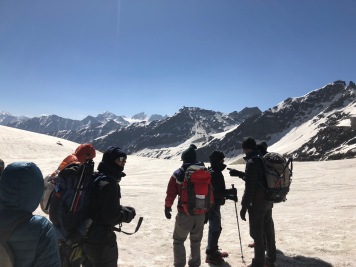 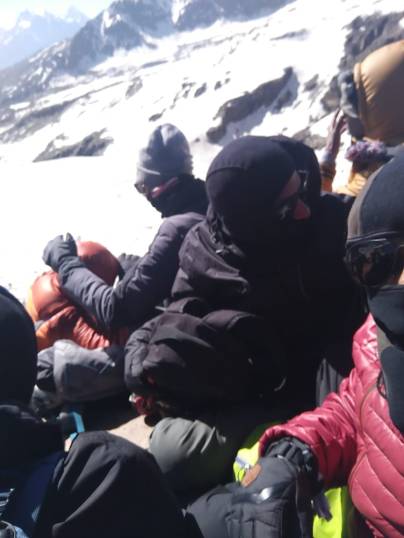 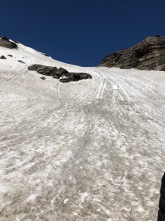 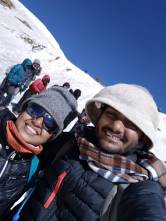 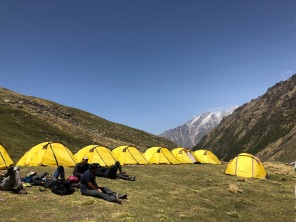 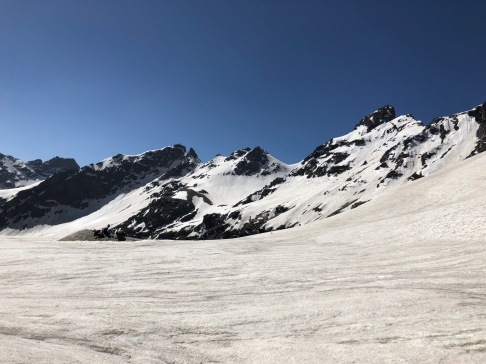 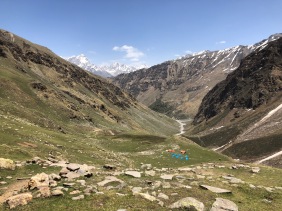 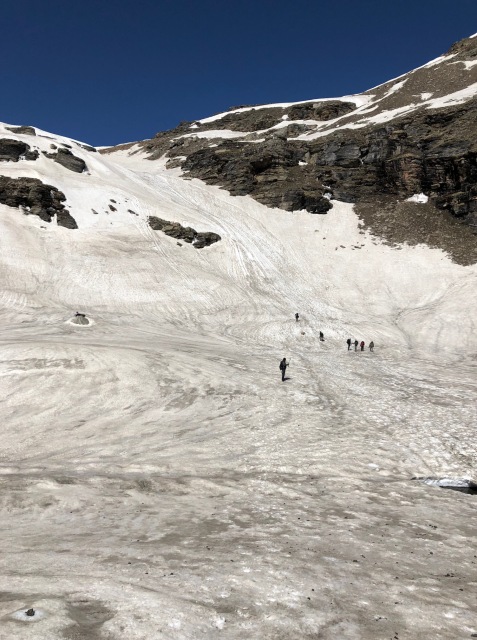 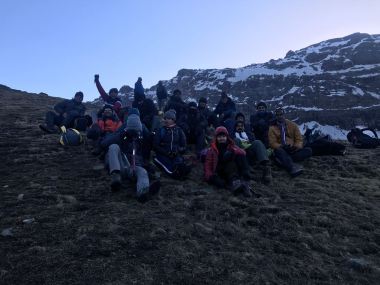