Himanshu made us get up from our slumber and do some stretching exercises, but after that we laid flat down again, some went into their tents while some were sleeping out in the open. It was getting too hot and sunny.

Bhim placed a couple of liners on the tent as it was too bright, we chatted and listened to old Telugu Movie classics like Sagarasangamam and Shankarabharanam. If you are a south Indian and had parents who listened to classical carnatic music, then the above two movies are considered cult classics. It was different and refreshing. As my buddy said, Never did we think we will be listening to these songs with this view!

After some time, we made our way to the dining tent as we knew it was the last day and  we all wanted to be together. Already there was Kiran, Neel, Aadit, Pooja, Nirvi,Akaash, Kashif, Praveen, Advaith so we joined them. Amish was blissfully sleeping out and getting properly sunburnt. We were chatting, cracking jokes and stayed put while a few of them were lying around. It truly was the last day for us.  Tomorrow once we trekked to Sangla, we would go in different directions.

After a delicious snack break of Pakodas and Chai, Himanshu gathered us together and we spoke of our experiences, each one of us. For most of us, it was about what happened today, one had to confront and talk about it. We got emotional, overwhelmed that we survived it all and if it were not for Rokabhai, Rabin and the porters, we would have not been sitting together like this.

I remember Himanshu narrating his experience about today and he had the guts to say he faced death and for the first time he felt fear and panic in his long trekking and mountaineering experience. Kiran got serious this time and said that imagine if even one of us had died, Rokabhai’s career as a trek guide was over. One casualty was enough. For us it was just a trek, for them it was their livelihood.

We all had dinner together and we were totally tired to play any games. But I do remember a few significant things. Like The Sarala Birla Boys explaining their food schedule in their ivy league institution and what their menu was. Praveen and Anand were shaking their heads. Pizzas?? Pastas?? Gourmet food?? 🙂

Advaith – the Sarala Birla lad and I had bonded over food, travels and getting high. This guy was something else altogether.While Amish was going off to Canada, Neel to USA for their undergraduate studies, Advaith was taking a gap year and was going to build his own bike! His love for bikes, the technology started when he was very young. His dad was pretty much hands on, a self made man who made it big.

He convinced his parents to take a gap year and make it happen. His wish was to intern at Harley Davidson, he had done all the research but he was ok if he didn’t make the cut, he would do it in Bangalore. As he spoke that evening about his passion, I could see the sparkle in his eyes, his enthusiasm. It was so refreshing to hear it.

This country needed more creators and inventors. Not cut copy paste clones we were putting out in the world whose aim was to finish college, get into a job and become a machine. I was glad Advaith was not one of them, he was making his own path, a path that few dared to venture.

After dinner, Indiahikes team made a cake and we made Kiran cut the cake. His birthday was just a day before mine and he didn’t tell anyone then so we made up for it by singing Happy Birthday. It was time to call it a night and head onward tomorrow to Sangla.

People were heading in different directions. Advaith to Simla, Pooja, Nirvi and Aakash were going towards Simla, near another hill station, Karna and his Dad Mihir initially wanted to go Chitkul but decided to go to Simla and so on.

The next morning, we were ready and up and about to do the last trek of this journey. We would descend and I mean proper descent all the way down to Sangla. We would use the shepherd’s trail throughout which meant crossing through rolling green meadows, overlooking the Kinner Kailash range and just keep descending.

We looked back as we started our trek, on the other side was Rupin Pass and those snowy mountains.. It was just yesterday and today was something else.Life is like that isn’t it?

We started the killing descents all the way from the meadows to the rocky mountains passing shepherds, porters carrying heavy baggage. I was chatting intermittently with Rokabhai, sometimes with Pooja and Kashif, sometimes with Bhim in the first half but mostly being on my own. That day it was also about silence, about being in your zone. Some were far ahead while some were way behind.

It was a beautiful trek as we took it all in. The Mountains with the meadows on the entire slope of the mountains, we were saying Goodbye to them until we meet them again someday..

At one point I stood still and saw the thick foliage of trees on the slope of the mountains hearing only birds and nothing else, taking a deep breath and being in that moment. When will we get these moments again? City life with all it’s speed greed and noise could pull anyone down, could make us forget our true nature and moments like these reminded us what was important.

We could see the first signs of civilization and villages, it was getting hot and more hotter! After 9 days of being up there, this was like a slap on our faces, a reality check. I was chatting intermittently with Advaith, then Neel.  Anand and I spoke about food and btw he promised he would take me to certain awesome food joints when I visit Chennai! I am holding him onto that 🙂

I was curious about Himanshu’s backpack, a petite man like him having a 14 kg backpack that big so I asked if I could carry it for some time and he obliged sweetly. So while I carried his backpack we chatted about the mountains, he showed me trees with the famous Golden apple that was a specialty here.

I was complaining about how I am hating the noise, civilization and the hot weather here. He said it was always difficult for him to come back to civilization. Dehradun was fine because that was his home but it choked him being in towns and cities, all he wanted was to be up there in the mountains.

I echoed the same sentiment and it has been happening for a couple of years for me, the more I go to the mountains the more I realize  the city with it’s people, so called friends and social circle doesn’t connect with me anymore. The Mountains do that to you, they strip you of all that masks you hold onto.

I had shared about the cafe and other stuff with Himanshu and he resonated with it. He said something so simple and profound. He said you are in such a beautiful space right now Swapna, not knowing what to do next. You gave up something you loved doing and moving on to explore new territory, you don’t know what it is and that is really beautiful.

I have had awesome trek leads but Himanshu was one of a kind. This young man was teaching me so much. To be free, to live life fully in every way, to not get bothered about what to do next, to be ok with ambiguity. He mentioned he was in the same phase, he wanted to give this up and he had no idea what to do next and he was not worried about it either.

We finally reached the last leg of the trek, into the town but with a killing ascent all the way up. Himanshu took back his backpack saying it will kill you, this ascent is hard. And we were in Sangla town but what an ascent. It was hot, we were getting roasted and on top of it the dust, noises, garbage everywhere, it was getting to us.

We kept walking, panting, huffing and goddamn those steps. We passed by a group of friendly women who asked us as to where we came from. When we told them, they were saying from Rupin?? No problem, just a little ahead and you will reach the town. Remember one thing, for the locals little ahead could mean kilometres for us!

Finally after mini breaks and the unforgiving sun hitting us hard we reached the guest house. We could take a shower and go for a quick lunch and get into our vehicles to go to Kalka which was 45 minutes from Chandigarh. Bhim and I were going to Chandigarh. Kashif, Shravan, Kiran, Praveen, Anand would join us in the same vehicle. The Sarala Birla boys – Amish,Neel, Akash and Vishwas would also come to Chandigarh, we would meet them there.

Advaith, Bhim and me had more important things to worry about than just take a shower! We started searching for Sangla stuff with Rokabhai but we didn’t find any! We were so looking forward to having a drag but this seemed like a No go!

After a delicious lunch, we came back to the guest house. It was time to say goodbye, we hugged, patted each other. This was not the end.. New Friendships had forged. We revealed so much of ourselves to each other, which we wouldn’t do to people we usually meet in the city. We were friends for life. I said an emotional goodbye to Himanshu, Rokabhai and Rabin. 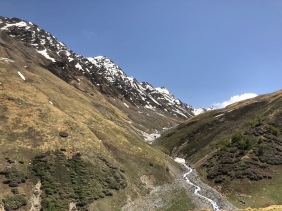 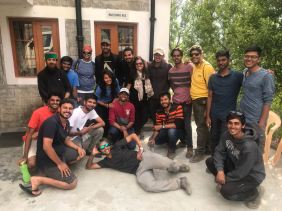