We came back to our hotel and rested up a bit. We were tired and we didn’t get much sleep either yet we wanted to be awake I guess, it was the last night before we all went our own way.

Bhim and I got a nice spa massage. We were talking about this a few days before the trek ended,when the body was getting pounded. Finally we felt rested after the massages.

Bhim was saying how his masseuse unloaded all her woes and life stories to him and he was quietly listening and nodding. It was funny how they communicated, him with his south Indian accented Hindi and her with proper Punjabi Hindi 🙂 But when one connects language doesn’t matter, and what he did was lend an ear and mostly that’s all we need, somebody who listens and doesn’t judge us.

We decided to go to a mall, do some window shopping and check out a brewery there. I messaged Amish that we were hanging out at this place and they all can meet us at the brewery for drinks and dinner.

And here is the thing about Chandigarh. We were mighty impressed by it. It was truly a well planned city. Gardens and parks everywhere, Roads were wide and yup very little honking and people seemed to have more civic sense than the rest of India.

I mean at 6 pm we were in a cab and I was pretty impressed by the traffic here and I asked the cabbie so when is your peak time? And promptly he replied Madam, this is THE peak time, aaj kuch zyaada hi traffic hai!(Today, there is lots of traffic!) We were like seriously?!

We were at the brewery and Amish, Neel and Kiran joined us. We chatted over beer and lots of food. Amish stuck to Long Island Iced Tea and that itself got him buzzed, we reminded him this would continue in the room so he better go slow!

Amish for all his forgetfulness was surprisingly astute, he was aware, intelligent and he knew what he was doing. Neel was the lad born in this new generation but his heart  believed in an old world romance. They spoke about their lives, their crushes, what they wanted to do next and so much stuff. It was refreshing to listen to them.

We all came back to the hotel room and Akash had joined in too. It was a crazy fun filled evening as we laughed out loud at every inane thing and Kiran made them turn round and round in circles until they felt woozy and Akash was watching over them protectively.  We chatted till 1.45 am until none of us could hold our sleep any longer.

We crashed and woke up to a different day. It was almost the end of our trip and we were in our ‘going back home’ mode. Amish and Akash had a morning flight while we had a morning train to Delhi and from there a flight to our destinations. Kiran was taking a later flight and Neel had a late afternoon flight.

The boys left first and we said a warm goodbye to them and we were set to go. Saying goodbye to Kiran and Neel, we made our way to the station. As we were on our way, we noticed the city looked even more beautiful, it rained heavily last night and now it was a nice drizzle. Lush greenery, clean roads and less traffic, we wished we could stay one more night here. This city was worth exploring .

We were jolted back to reality in the train by ‘hatta katta'(I term it healthy & robust!) loud Punjabi Aunties and their families who were eating throughout the trip. We could see bags and bags of snacks from Haldirams to home made ones and all were on an eating spree every minute, the oldest to the youngest! We were entertained whether we wanted it or not 🙂

Bhim had an earlier flight than mine and his was a different terminal so I had to get off one station before him at the Metro. That heavy lump in the throat again.. I made sure I didn’t well up when we said goodbye.. How rare it was in today’s world to connect with someone who became a dear friend in no time.

I knew we would see each other again soon and yet.. I teared up once I started walking towards my terminal. The whole trip,the connections, my pal, the people I met, Himanshu, the Himalayas, life flashing before your eyes moments, everything was whirring around me.

I checked in and as I sat at a bar and ordered a chilled beer, I was about to message Bhim saying Cheers! and bingo right at that instant came his message with a pic of a Beer saying Cheers! A big smile came on my face, yes we were connected, we all were, distances didn’t matter, it’s the intent that matters, the energy behind it matters.

We were so blessed in every way, 19 of us came together and went through challenging terrifying moments that not many did.

Is this the end? Definitely not. And as my pal Kashif messaged me after yesterday’s blog, I promise!  Yes promises will be fulfilled.. 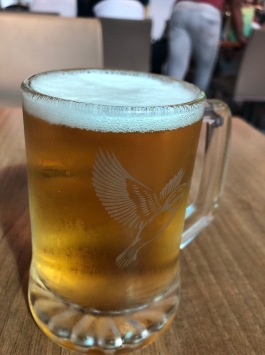 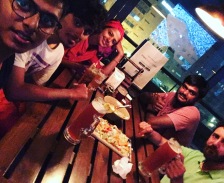