So here we were eight of us including the driver on our way to Kalka. Bhim had the responsibility of staying awake the whole way until we reached Kalka early morning so he was in the front with the driver.

Kashif was kind enough to interchange from front to the dreaded back seat for others through the 13 hour drive. It was going to be a long haul drive and after trekking and being out there in the mountains for days this was a jolt to to the body, to being stationary and trying to take in the noises, roads and people.

I had a great time in the first half with Anand as we exchanged stories about movies,songs and we spoke about the Telugu cult movie ‘ Arjun Reddy’, I was surprised and glad to see he knew about Vijay the actor (my heart thumping hard for this actor btw :-)) the movies he had done. I remember us listening to the awesome soundtrack of the movie, it has a hard rock feel to it.

We were meeting the other groups at Chai breaks and getting back to chatting with them, it was not a goodbye yet and here is the funny thing, we were saying goodbye every time as if it was the last time and we would see our gang again at breaks 🙂

Bhim was focused on getting the local stuff and kept trying during breaks and he finally managed to score when someone offered him just like that, he and Advaith took a whiff and it hit him once he got in the jeep. He was like sorry it happened suddenly, these guys themselves didn’t know they would get to smoke it. I resigned myself to it thinking Chalo I won’t get to smoke this time, so let’s accept it.

But during a stop at one of the towns, Bhim had a mini adventure with cops everywhere around him! He had to go to a dingy corner with hordes of cops around and get the stuff from some man who just came, gave it and disappeared.

You have to understand that in a small town in Himachal Pradesh, Bhim stood out literally like a sore thumb and he managed to get it. I was in my own zone until he got inside and said I got it! Wait what?? He did? It took me sometime to realise he actually did! We were now all set for Chandigarh!

I also had a nice chat with Praveen who spoke about his large joint family and his love for food! He shared instances where he would travel early morning,I mean really early and drive 10 kms sometimes because he heard of some joint had some kind of speciality. Wow, that is perseverance I tell you!

The driver played fantastic, old and I mean really old Hindi songs and we were crooning hard! I remember Bhim saying here we are, all south Indians singing old Hindi songs in Himachal Pradesh. Immediately Shravan said, hey Kashif is not south Indian! Bhim replied well, he is one now, surrounded by us 🙂

We bade our last goodbyes at dinner time with the other groups, they would be diverting now. Bhim shared some of the stuff to Akaash and Advaith and we were on our way to Kalka.

After an excruciating uncomfortable drive in the last bit, we reached Kalka at the unearthly hour at 4 am and scampered our way to get autos that would take us to Chandigarh city. I was the only one who had a booked a room for myself and Bhim while the rest didn’t even think about it. I had called a day before and asked for another room for Amish, Neel and Akash and they were ok with it. Anand and Praveen had a noon flight and Kashif and Shravan had a 6 pm flight the same day.

So invariably all ended up in the same hotel.  We requested the receptionist to accommodate the others in our rooms as it was for a few hours, we would manage but they just didn’t agree. Poor Kashif  searched and got a hotel nearby and Shravan, Anand and Praveen left with him. Kiran was very clear he wanted a room of his own and he got one in our hotel. So pronto he went off to his room.

And I should mention something about this lad Neel. Throughout the trek, he would always hang out with older people or ‘old’ as he mentioned people like us 🙂 He easily mingled with us. That morning we were at the reception,waiting to hear if Kashif got a room because we were worried. All of us needed rest and Kashif was out there searching for a hotel, Neel was waiting with us. He didn’t go back to his room until everyone went inside .You know what I mean?

We had a complimentary breakfast in the room, delicious Poori Bhajis and Chai which we devoured. Later in the morning, Amish, Neel and Kiran dropped by. They had an all you can eat buffet breakfast at  the 5 star hotel J W Marriot. I told Kiran for all the high class comments he made on Sarala Birla boys and calling himself ‘low classist’ he was pretty generous in spending so much on himself!

We had to say goodbye to Kashif, we had to meet him before he left so later we all met up for lunch at this tiny place called Chawla’s. All we had to do was ask the reception where we could get good local food and he pointed us out to this one and it was at walking distance.

What can I tell you about the food? The Kebabs were to die for! Kalmi Kebabs, Shammi kebabs, soft tender and melt in the mouth and Kashif and myself were going bonkers about it! Even the vegetarian Thali Bhim ordered was delicious and the Paneer was heavenly!

I remember Kashif and Bhim having a banter over the word ‘Biryani’. Kashif rightly said dude, it’s not a Biryani without meat! And Bhim promptly used wiki or whateverpedia on his phone to justify why Biryani can be called Biryani with no meat!

Amish and Neel joined us and they were still heavy from the late breakfast but we pressed them to take a bite. It was an awesome lunch and it was time to say goodbye to Kashif.

What do I say about this guy? I had a lump in my throat when we bade him goodbye. Yes we promised we will meet up and he did promise he will come to Hyderabad in November with his someone special,  yet I thought would we all meet up just as we promised? What if we don’t?  I truly had this feeling that I was saying goodbye to an old pal.

As we walked back to the hotel, I wondered. Looking at everything around me, I just hoped that the promises we all made amidst the mountains should continue in the city, no matter how far we all are from each other.

There was still one last night to go.. 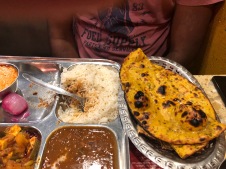