I woke up the next morning with a queasy stomach and nausea. I started dreading as to how will I be able to make this road trip for the next 4+ hours. After answering nature’s calls umpteen times I decided to not eat anything until I really felt like it.

Pankaj’s son Adit had come home the previous night from Powai where he lived. A pleasant guy he had the same twinkle in his eyes just like Pankaj.

Over Chai and Khakhras( Gujarati snack) which they had, we kept chatting. I was only sipping water and praying for an easy road trip. Pankaj asked Adit if he can join us on the trip and when he said Yes I saw Pankaj’s eyes fill with happiness and joy! That look of a parent when their child will spend time with them. The things we take so much for granted until the tables turn on the other side isn’t it?

Pankaj had forgotten the guesthouse keys at his office so Bhim and he went to pick them up while I continued chatting with Adit.

We were finally off around 9.30 am and once we crossed the city limits, for the first time I noticed Pankaj’s driving on the highway. I mean it was not the first time I was in his car and I was always fine with it but with my queasy stomach and nausea, my heart was in my mouth when he zipped and zoomed.

And then I thought, wait a minute who else drives like this? And right when I knew it Bhim said to Pankaj, Hey you drive just like me! That’s it yup two crazy Aquarians in my life sitting in the front, zipping and zooming!

In no time we were in Dahanu, a sleepy coastal town populated by 90% of adivasis and development had already sunk in there. It was surreal because it already seemed like a lifetime of the city madness we left..

Adit drove into Vaki School, this school formed by the Gokhale Educational Society was supported collectively by Pankaj and a group of other like minded people for a decade now. There were around 250- 300 adivasi kids studying and boarding .It was summer so all the kids had gone back to their homes.

It was a hot afternoon but it was so beautiful there.Tranquil, serene, quiet with fresh breeze with the cows resting in peace. We all became silent the moment we reached there. One had to soak in the environment for a bit after the chaos in the head. I instantly felt better. All that nausea just vanished.

Pankaj was talking to the resident staff who came to greet him.They were building toilets for the boys and another new dormitory for the girls and Pankaj was overseeing it. I could see the happiness in his eyes. No wonder he was visiting here every other weekend.. Who wouldn’t?

Kavitha, a young lady working at Pankaj’s house was from Dahanu and her family invited us for lunch. A tiny 21 year old, she was from the Adivasi community and she had tried schooling for some time but dropped out because she couldn’t figure out basic studies and it was getting tough for her so Pankaj brought her home and tried to teach her. She was an integral part of their family taking care of them all. Pankaj was now training her in his office.

When Pankaj told her we were going to Dahanu she told her folks to prepare lunch for us.

I noticed how caring and thoughtful Pankaj was, from buying jalebis for the family to getting them a bread toast maker to be used on the stove.

We drove towards the house and we saw kids recognising Pankaj. Kavitha’s brother came running to greet him. He was in computers and was working in Bombay with one of Pankaj’s brothers firms.

Kavitha’s parents came out of their tastefully done hut and Pankaj introduced us to all of them. I observed how keenly he asked about their well being and a couple of kids about the school. He introduced us to another bright girl who had done her Msc( post graduation) and was now working in the city. Some people don’t make a big show of it, they just do it.

Their home was beautiful, neat and cosy. Simple surroundings and very peaceful.

Pankaj introduced Bhim to them, when he said this is Bhim, Kavitha’s brother laughed and said Lagta hai!(Looks like Bhim). Bhim by the way is 6’4 ,a big guy and this is something he faces every time he meets someone new. They ask one question always, ‘ How did your parents know to name you Bhim’??😊 He was a source of delight and smiles to everyone thanks to his height and build. They were looking upto him literally!

They had already made arrangements for lunch under the shade of a big tree. We had two types of Chapatis made from rice – very tasty and different, potato curry and let me tell you the most delicious Dal(lentils) I ever tasted in my life. As we sat under the tree and ate and chatted with them I felt certain things are meant to be. Just meant to be.

Kavitha’s father was talking about the drought, how tough it was becoming  and he hoped it would be better this year. It was poignant when he said I will be the last of the farmers in my family. I am the only son and my son is working in the city but till I die I will be here only. This people is the reality.. An agrarian economy dwindling..

We were given fresh juicy litchis to eat post lunch. They were so good that I started munching on them until Pankaj warned me saying hey that has a lot of heat and you are recovering, don’t eat too much! Immediately Adit said I think it’s too late for that, let her eat and he gave me one more with a wink! I loved the father son banter! 😁

After having such an awesome lunch under the tree and mind you it was a hot summer, we felt fresh breeze and we wanted to lie down for sometime. Pankaj saw us and knew we would not get up for the next two hours if we slept off so he got us up and about to go to the guesthouse.

What we didn’t know then was how the afternoon, evening and night would turn out to be, one after the other like the waves of the sea.. 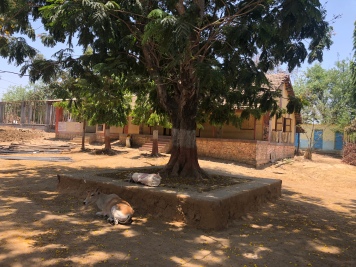 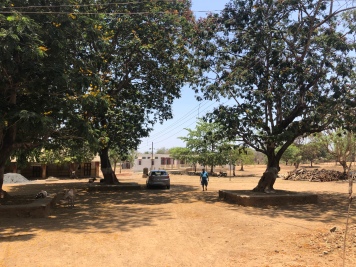 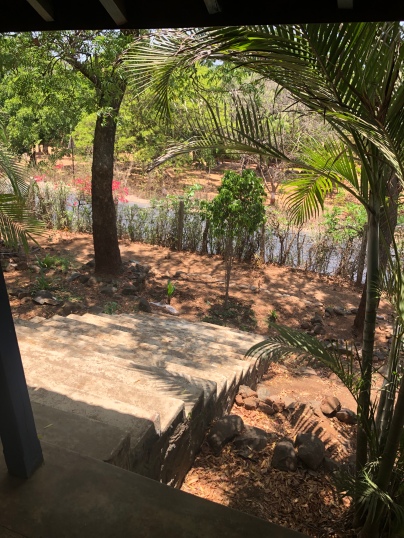 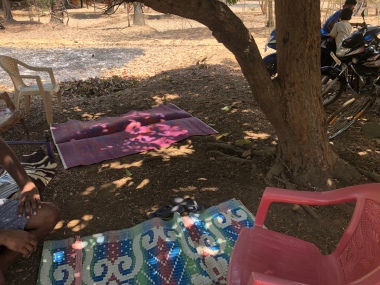 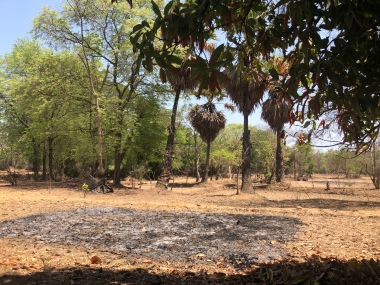 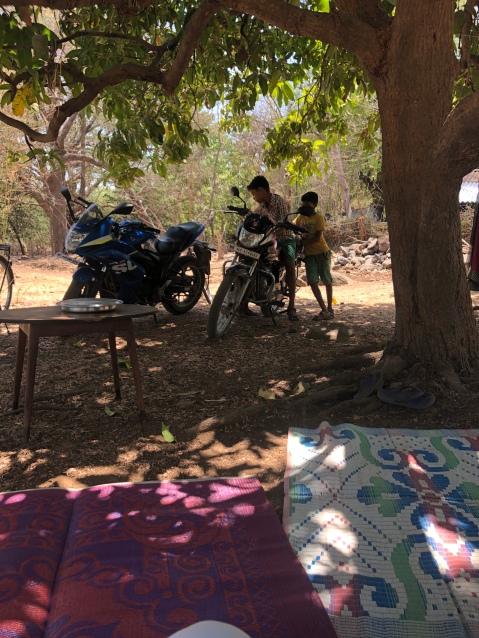 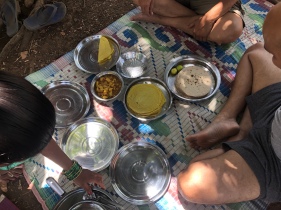 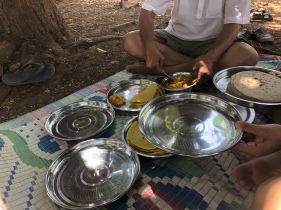 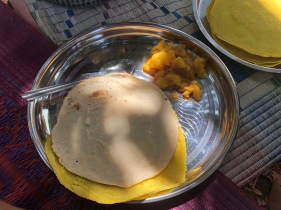 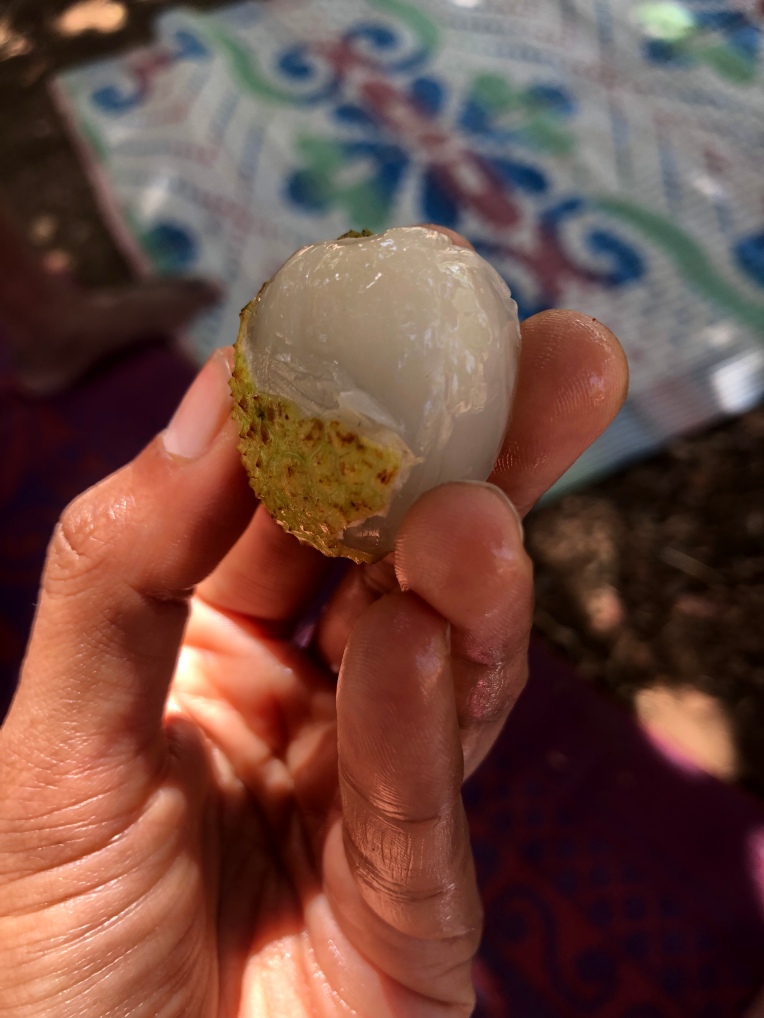