Reaching Tabo meant we were finally in Spiti Valley. The Kinnaur region was a distant memory now. Different shades of brown and grey landscapes and the monasteries and homes blended with the scenery.

It was pretty quiet when we got dropped off, we asked around if there was any homestay and promptly we got the answer from the locals, we could stay in the monastery itself.

I read about this in a blog that Tabo monastery did have rooms but they also warned that it would be fully booked, we got lucky this time. The tourist season hadn’t fully peaked yet so we got rooms at a cheap price in the monastery campus.

The whole floor shared one bathroom which was cool with us. Now Swamiji had an issue, he was like Only one bathroom in the whole floor! There is no seat cover! He seemed shocked for a man who claimed he stayed in a cave for 10 days. Mountains removes the farce or any masks you have built. It is true. We see the best and worst in us and in others when we are tested in the mountains.

As one of the staff members were showing the rooms, Bhim wisely went and put his backpack quickly in one of them. The reason? The window in this room opened to the 1000 year old monastery with a view of the mountains! It was breathtaking and I remember us standing there for a while taking it all in. See Bhim’s pic and see how blissed out he looks. How blessed we felt to wake up to this view.

The old monastery was not functional and a new monastery in the same campus was being used by the resident monks for prayers and studies. The old monastery stood out in all its glory. It was a bystander to the rapid changing times and yet timeless.

We were glad the other two had a room to the far end. It was truly time to bid goodbye to them although Swamiji wasn’t letting us go that easily, he kept asking us for our next destination which was Kaza. The bright spot was they had only a couple of days in Spiti before they headed back home.

We were hungry so we went down to the monastery cafe. Swamiji expected us to sit with them but with the aunty yapping continuously on the phone( Only BSNL network works in certain pockets) we politely declined and sat inside. It finally felt good to have some silence. Bhim shook his head and we both burst out laughing at the same time. It had been quite a ride so far and with these two, a test of patience 😊

Over fried momos, chowmein( another staple in Spiti), Butter tea and Mint Tea we spoke about our next plan. The next day’s bus timings were conflicting. Even though we got dropped off at Tabo this afternoon and we thought we could take the same bus tomorrow to Kaza, the locals clearly said there were two buses to Kaza, one around 8.30 am and one around 5 pm. The morning one seemed too early, evening too late so maybe it was better to hitchhike.

Swamiji came and enquired if we could all go to the meditation caves. Yes, a walk up and above the village were Meditation Caves used by monks hundreds of years ago with a big meditation hall. All of them dated back to 900 years. They were going up so we took a break and relaxed in the room for some time. We wanted to go in leisure.

Bhim said that night was a Lunar Eclipse and it started around 1.30 am, if it was a clear sky we could get an amazing view.  So we set the alarm for it. It was time to get out and explore.

As we got out I noticed there were lots of dogs around Tabo and very friendly like how mountain dogs usually are but here they were really happy playful dogs. I also loved how monasteries and buddhist temples let dogs inside, even upto the altar. All were sentient beings to them. People fed them, loved them no wonder they were so peaceful. Any place that respected animals respected nature and God in every way.

Bhim suggested we get out and see the caves first so getting directions we made our way out and walked uphill. As we walked up it started raining, we had our umbrellas but by the time we walked up ahead we noticed the meditation hall was closed, it was past 5 pm.

So we sat down wherever we were and took in the view of Tabo and the vista of mountains surrounding it. It was a valley in every way. The Mountains on either side looked like it could swallow up the village in one go. There was silence, the breeze, the birds and absolutely no din of the city. We had left everything behind.

It felt bitter sweet, the world was coming to know about Spiti and in a few years time almost every destination point in Spiti would be polluted with noise, vehicles, human waste and in the end greed..

It would become another Leh,Ladakh, Manali and Simla. Innocence would be completely lost.. I was wondering should I be glad that we came before it becomes all that or should I be sad we are adding more carbon print? That conflict always is within me whenever I travel..

After some time we made our way down towards the old monastery. It was peaceful albeit some Delhites making the biggest noise, and of course the Americans- their kindred spirits when it came to being obnoxious and loud. A cafe, not the monastery one was filled with both these kinds of people.

We saw small markets selling prayer flags, silver trinkets and souvenirs so we stopped at one of them. The Tibetan couple selling it were from Manali. They would be going to Goa in Oct till March, then stay in Manali for a month and come back to Tabo. The man seemed well informed as he asked about Veerappan the sandalwood smuggler the moment Bhim told him he was from Bangalore.

Right then came a beautiful older furry dog, a handsome one and he was limping, his right leg was broken but this furry chap was so happy seeing us, he came inside the stall. The Tibetan couple told us he was the oldest dog here, was an original Tibetan breed and nobody knew how his leg broke, a vehicle must have run over his leg during winter time.

Dogs can teach us so much.. He was happy on his three legs, with his fur turning silver he seemed to have experienced lot in his life.. He followed us as we sat in front of the huge Kalachakra Stupa that was initiated by the Dalai Lama when he was here years ago.

It made me wonder why we humans are so into our needs,wants and desires. Whether it was  material,financial or carnal. After petting the old one, we went into silence. Bhim was meditating and chanting while I closed my eyes, I truly felt thankful for that moment, for the life I was given, the special people I had in my life and the people who taught me and left. I thanked the friend that was sitting next to me.

We were in a trance until we heard ‘Crunch Crunch Crunch’ I opened my eyes to see Aunty! Yup Aunty and Swamiji sitting on a bench near to us and eating Chips loudly in front of the Stupa, silence and reverence to this place be damned! 😁 Bhim looked at them in shock and said Arre!! Aap??( You!) they both waved and right then Bhim said it’s her ‘ Magnetic Mala’ you two are getting attracted towards it! They laughed and kept talking louder and louder in Bengali.

We laughed, it truly seemed like my magnetic Mala seemed to attract his Rudraksha! It was time to leave the premises. We didn’t feel like eating dinner. But Bhim used a word, ‘Ashakt’ it meant without strength just to have an Ice cream 😊 As we took our ice cream, came the friendly dogs, tails wagging and tailing us. I got two packets of biscuits for the dogs and gave one to Bhim, my packet was over fast so there were 5-6 dogs surrounding Bhim all tails wagging. This super tall man and four legged creatures surrounding him was a sight to see!

On our way back we checked with one of the monks if we could attend morning prayers. A few of them said it would be after 5.30 am in the old monastery.

It was time to head back to our room. Bhim told me he would wake up at 1.30 am to check the sky and if it was clear he would wake me up too. It was an eventful day and as I slept I only hoped I wouldn’t dream of Aunty going Crunch Crunch on the chips!

As I lied down, I saw the window with its view of the mountains, how lucky we were to be right here,right now.

But a big  Zinger would happen in the morning! Wait for it 😊 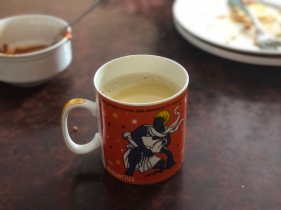 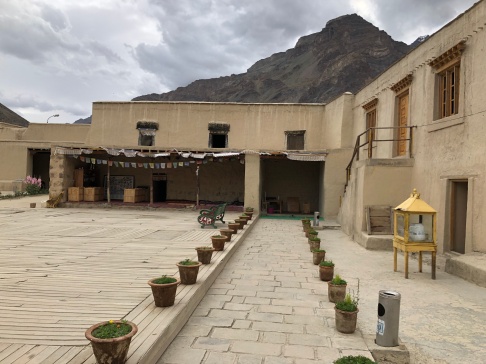