I woke up around 5.30 am, got ready and woke up Bhim so we could go to the Monastery for prayers. Bhim said it was a cloudy sky when he woke up at 1.30 am, the lunar eclipse wasn’t visible.

It was too early really, there was a nice chill in the air, there was no one else except a few monks. We started asking around and everyone gave conflicting answers about the prayers. Finally a young monk said there were no more daily prayers except on special occasions. The monks would finish their prayers in the dorms and continue their studies and debates in the open courtyard.

We sat in the courtyard for sometime and got back to the room. We dozed off for sometime and after a while discussed about how to get to Kaza. If we visited the caves, we would have to wait till evening for the last bus and that was too late.

I suggested that we visit the caves at 10 am, finish up and hitchhike quietly without informing Swamiji and Aunty. Then Bhim said Hey! In that case why don’t we take the morning bus itself??

It struck us both like a lightening! We were not too keen on the caves and this was a fantastic idea. Let me tell you how crazy we are because both of us were relaxing in our respective beds, unpacked backpacks, it was 8 am and we made this decision to take the 8.30 am bus!

We jumped out of our beds, got out of the room to get a quick breakfast and guess who is walking towards us, Swamiji in an orange towel coming towards our room presumably asking us what’s the next plan.

This magnetic Mala of mine was truly working in a weird way! He started off with there is no hot water here to take a bath! 🙄 We mumbled something and all we were thinking about was how do we finish up fast, avoid the twosome and go!

He asked us if we saw the caves and a 500 year old painting, we said not yet and rushed out. We went to a nearby cafe called Kunzum top, had Omelettes, Tibetan Pancakes and French Toast. Since Bhim’s order just arrived he told me to finish off my packing, he would join me soon. I carried my leftover breakfast and gave it to the dogs outside. Besides the monastery, the only other reason I would visit this place again were the dogs, I would miss them terribly.

As I finished packing, Bhim rushed in packed and off we went out of the monastery dormitory hoping the twosome won’t see us. Bhim even wondered if we should inform them but I told him, look we don’t owe them anything, we are travellers, our journey with them ends here. You reach a point where you don’t have to bear anyone whose wavelength doesn’t match with you, it’s as simple as that. No pretence.

There has been a massive surge of travellers doing Spiti on bikes. One could rent a bike from Manali, Chandigarh or Simla and do the Spiti route. But let me tell you, having a bike and leather jacket and all that jazz doesn’t make one a Biker. The attitude should be right and most of them didn’t have that.

We got into the bus, it was virtually empty and we high fived! Us and our literally last minute decisions! We had to be two crazy kooks to change our plan like that, anyone else could have gone nuts😁

It was a wonderful ride to Kaza with the friendly driver and conductor. We took in the landscape, felt every breath of the fresh air, Tabo seemed like another memory now.

We reached Kaza which could be the biggest town in Spiti. Bustling, very busy, it was already on its way to commercialism. We asked the driver and we came to know there was only one bus to Key monastery, that too in the evening.

The driver was surprised when we told him we were from the South and we  trekked the Himalayas 3-4 times a year. He said, ‘Humein to kuch nahin dikhta yaha, sirf pahad hai, aap itne door se aaye yo!’( We don’t see anything special here, there are only mountains here and you come from so far) He showed us photos of a family from Bangalore who visited Kaza recently especially a doctor Shruti, saying she was still in touch with him. We thanked him for his time. He was friendly, funny and very witty.

Key monastery was until recently highly inaccessible and the walking route was steep and dangerous but now with a motorable route  there were galore of tourists visiting it.

We wanted to stay in the monastery but we didn’t want to spend a whole day in Kaza just for the bus. After the silence, this place seemed like a smaller version of Simla with all that noise.

We also checked the rates for a shared ride to Chandratal, the last destination of Spiti and the only way to get there besides bikes but we would get on to that later. Right now it was Key.  This time and the only time we decided to spend on a taxi to Key monastery and then decide what to do. It still worked out well for us budget wise.

The driver stopped at a point briefly and told us to click a picture, this would be one of the most famous views of the Monastery. Almost every pic on the internet would show this view.

We got dropped off and we started walking up. It was pretty high altitude, with the thin air and our backpacks, we started panting. We stopped a Lama and asked if rooms were available. He mentioned they had stopped accommodation for now but there were rooms available in the only cafe in the monastery campus.

So off we went down again towards the cafe. I was glad we didn’t have to go all the way up to the monastery to realise there were no rooms!

And as we entered the cafe, I saw the most striking, handsome, crazy and I mean crazy guy of the whole of our Spiti trip- Karan! 😁 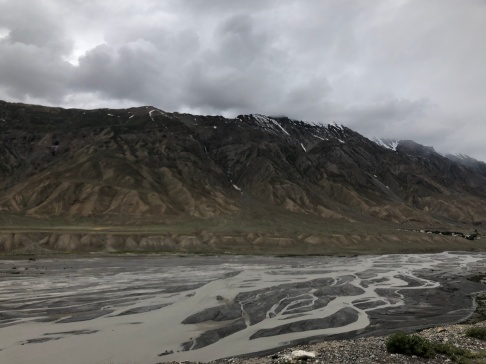 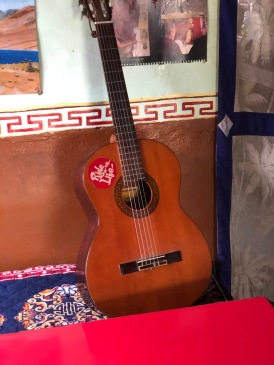 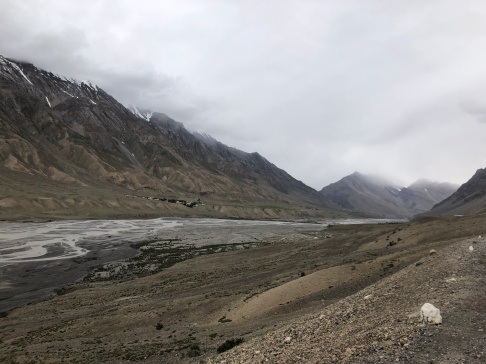