One of the main reasons and maybe the most important one why Bhim and I signed up for this was Dzukou valley. We had seen it on the web. I have a fellow Trekker friend Vinayak who backpacked and trekked to Dzukou valley and Arunachal Pradesh right after we did Roopkund Trek(in Uttarakhand) in September 2017.  It was enticing to say the least.

Dzukou valley was on our must visit list for 2019. We had actually planned a long itinerary of the North East in September this year that included Meghalaya, Dzukou, Arunachal, Manipur and even a hop, skip and jump to Myanmar. Yup that long and crazy itinerary 😊

But practicalities and reality caught up. Even with backpacking and sheer skimming budget travel, it would still cost us a lot and Bhim had a job unlike me and no way could he take off like that, not for now so we shrugged and put it out to the universe. ‘ It was meant to be’.

So we were delighted when the trek was a part of it. Now remember that we are hard core trekkers and by that I mean, we are bloody disciplined. Our experience of trekking is to be right on time, pack essentials, pack light in minutes and get going, no dilly dallying.

I remember Bhim saying another reason why even this smaller group doesn’t work for us.
Just before we started off, I bumped into Himanshu, he was sending off his group with a guide. Our guide was Roko, a young chap with a smile. He also said the weather was so unpredictable, one had to move on time.

Finally the group came about and we started trekking. For those new to trekking, let me tell you it’s never about the destination, it’s always the journey. Trekking is all about taking in the sights and sounds, enjoying every moment, not rushing and racing, to be the first always. What’s the point of it all if it’s just camp to camp?

After a point, it’s only the mind and heart guys, not the body. No matter how physically fit one can be, it’s the mental strength that makes one go the distance. Roko told us that the first one and half hour was a steep ascent and this was the most popular and less risky route. The whole distance was 6 kms. Before you say 6 kms only? Remember this is a rough terrain, hilly, wet mud, leaves and it takes the wind out of you. And boy was the ascent breathless. And this happens every time.

No matter how much experience you have trekking, the first one hour is hell. Your body goes into a shock, you are breathless and you know you have no choice but to do this. No one is gonna do it for you except yourself.

And right when you feel, What the fuck! comes this moment, this extraordinary feeling as you pause and look around you. The beautiful rolling hills, the sounds of birds, fresh air, nature at its purest and you know this is why you do what you do. It’s an addiction. As for Bhim and me, it’s an addiction that will last until it’s time to leave this earth.

We could see the others panting and heaving, for some of them, it was the first time they ever trekked and it was commendable that they were doing it without complaining. We reached View point 1 and took a breather and waited for the others. We got chatting with Roko for a bit, he had done hundreds of treks to Dzukou and he was only 25 years old.

It was time to move to the next view point 2, and after that would be a level trek into the valley. The views were exactly how you would see on your Windows Wallpaper screen. It was real and surreal. God was a magician alright, weaving his magic like this.

Now the ascent became steeper, holding onto rocks and keeping a leg here and there we kept moving. The weather was becoming unpredictable, it went suddenly cold to bright hot sunshine. We didn’t know whether to remove the layers of clothes or keep them on. I remember one girl Shuroma slipped and fell and luckily Bhim was right behind her to break her fall. I told her, you have been initiated, you are a Trekker now 😊 One fall is mandatory in every Trekker’s experience!

The ascent seemed never ending and this was the easier route. Yup, there was another route that was called a ‘short cut’ that started from Zakhama village, but it was so steep that even the locals felt it was difficult for them. After what seemed like eternity we reached View Point 2. We met another group who were from Tamil Nadu. Sharing smokes with them, we chatted for a bit. The view point 2 was breathtaking and really cold. Roko was waiting for the others.

He told us to go ahead. He told us clearly, there will be a downhill, followed by an uphill and after that take a left. Taking note, Bhim and I made our way. What we didn’t realise was that the downhill is almost at a 90 degree angle and one doesn’t see it while descending. It’s only when we looked back we were like, did we really do that? It was a steep downhill.

Right after that was a beautiful and I mean really beautiful level trek into the valley. Surrounded by bamboos, dried wildflowers, heavy vegetation on both sides we moved ahead. It was time for some music. 😊  I played Country roads, Yesterday by the Beatles, Aretha Franklin,Kansas, Joan Osborne, Lynyrd Skynyrd on my phone as we kept moving.

The valley was opening up like a big heart. We were so in the moment. Everything comes together. Every pain and soreness in you disappears when you are in midst of nature. Nothing exists except you and this.

Blow hot, blow cold and a glaring hot sun we were finally at the campsite of Dzukou. To be continued… 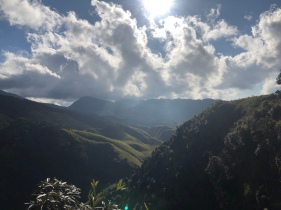 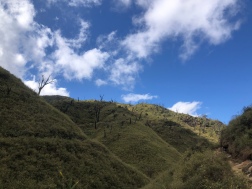 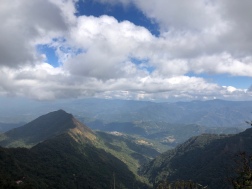 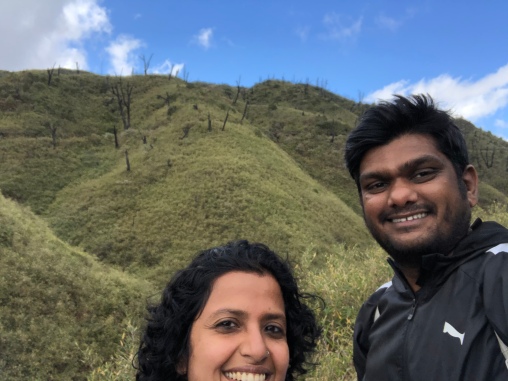 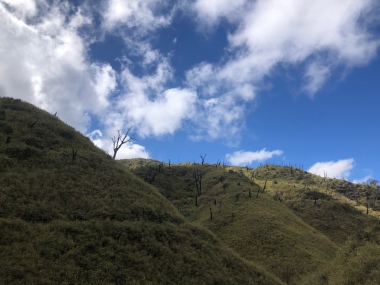