I woke up at 7 am to see Adit up and awake and getting ready to go. He was taking an earlier train to Bombay and then get back to Powai. We got ready to drop him at the railway station.

After a big hug and goodbye to Adit, I noticed Pankaj having that melancholic look and saying ‘And he’s gone’..

We went to the Jain temple complex for breakfast and chai. This time there were people in the canteen. Let me tell you I have eaten Upma in different variations but what I had that day was unbelievable. Small masala puris, Upma with coconut chutney, khakhras( which am addicted to now btw!) and that Chai.

We kept on hogging. We had a long day, evening and night ahead as Bhim and I were taking an evening train to Pune. He had an early morning flight back to Bangalore and Srini and his nieces would join me later in the night. When I look back I realise how I was moving from one transformative trip to another.

After breakfast we went up to the Jain temple. It was quiet and peaceful and there was no one around except one Jain family dressed in traditional robes from the youngest who was maybe 3 years to the oldest,the grandfather offering prayers. It was a sight to see. We three sat in silence and closed our eyes. The birds, the sunshine, the tranquility of the temple, it was beautiful.

I have noticed in every holy place I visited whether it’s a temple, monastery, gurudwara, Dargah or church there is a sense of calm and serenity. There is no explanation why. Not everything can be explained with logic.

After some time we got up. Bhim wanted to catch up on sleep as he slept really late last night so we dropped him at the guesthouse and we made our way to Waki School for one last time.

Pankaj showed around the school in detail, the old buildings versus the new ones. He had come here for the first time in the 70s when he was in college and the school was just one big house.

He was very passionate about this place. Being the logical and practical guy that he is, it was challenging for him to convince the donors why certain things wouldn’t work here.

We spent our time seeing the space, the new dining hall that was getting expanded, the residential quarters. Just then one of the kitchen staff guy came to greet him. A sharp straightforward man, Pankaj told me that his daughter was very bright and had finished her 10th standard exams.

We sat down and were chatting away enjoying the fresh breeze and right then the guy got us Jamun – the dark fruit freshly plucked from the tree. It was such a delight sitting under the shade and eating it! He also brought freshly plucked mangoes for Pankaj to take it home.

Pankaj packed some Jamun for his wife and the staff guy in his own way complained about the work. He looked straight at me and told Aapko patha hai roz kitna roti banate hai?? 300 subah 300 raat ko!( Do you know how many rotis I have to make every day? 300 in the morning and 300 in the evening!) His back was aching and he didn’t get many days off. Pankaj was patiently listening. These were realities and actual challenges and getting the staff here to work was a challenge.

After some time Pankaj said goodbye to them saying he will be back in June 1st week. We drove back to the guesthouse and we had some time. Bhim was blissfully sleeping inside.

Pankaj and I took our own space on the verandah and lied down on the floor. I remember playing an album from Karunesh, closing my eyes, arms wide open and getting into a trance. We seek and crave for such moments, to be free, to be still and to be present.. Pankaj too zoned out lying down.

After an hour and half it was time to go. We packed in silence, closed the windows and got into the car. That familiar ache started inside. Yes I was moving onto another leg of my journey and I was happy I would meet Srini and his nieces but after this I wouldn’t see Pankaj and Bhim would leave tonight. Change is inevitable but how do you explain it to your heart?

Bhim took over and since we had plenty of time he drove slowly. I played old Hindi songs of the 50s and 60s and we were all humming to it. The sun was so bright that Bhim had to put a cover( which was Pankaj’s lungi!)over his side of the window. And this was the funny part, every time he had to change lanes, he would peep from the covers as if it was a purdah! I would giggle like crazy and Bhim would join in 😁

We reached an eating point on the highway where we had really tasty Vada Pav. And right when you think nothing can go wrong it does.

As we were reaching the parking space, Pankaj couldn’t find his wallet. We started searching the car,Pankaj went twice to the joint, to the bathroom nothing! It went on for another half an hour until I decided I would search his small backpack again and there I saw, his wallet in the side pocket. I showed it to him rolling my eyes and this man cheekily says Hey I kept it at a very secure place 😊 Pankaj was as forgetful as my buddy Bhim!

Having lost an hour Pankaj told Bhim to speed up because there were chances of us reaching nick in time or maybe even miss the train. It all went well until we reached Thane. BOOM! It hit us like that! From the quietness we were now in the district of Thane with its buildings, constructions and full on traffic jams on a Sunday.

I used GPS and we made our way towards Railway station. Bhim and I were ok to even missing the train thinking we can take a bus no sweat but Pankaj was more worried than us. I could see him egging us on and to concentrate on driving and less talking 😊

Finally we reached the overcrowded traffic jammed station, we said our goodbyes to Pankaj and made a dash. Since there were local trains and outbound trains it took us time to figure out which platform it was and boy was it super hot and humid!

The crowds were overwhelming us totally and as we stood in the platform with the sun hitting us, Bhim and I realised how privileged our lives were living in South Indian cities.

The serenity of Dahanu was wiped out by standing there in that heat and getting jostled by crowds.The train was late by 25 minutes and when it came it halted only for a minute.

I remember sweating profusely because there were at least 40 people in front of us getting into the compartment and they were not moving and the green signal came on. Then we became pakka locals by shouting at them to get inside as the train started moving.

We found our way to our seats and finally sat down and looked at each other in bewilderment. What a contrast it was now to what we experienced in the morning. Reality bites I tell you!

And then hunger pangs started or let’s say stress eating started. This was an express and there were few stops. We waited for something to come by and finally some roasted peanuts came by. The moment I saw Bhim eating peanuts I started laughing loud again especially the look he would give when he saw me laughing. We also packed khakhras so we were munching on them.

Srini and his nieces, Aanchal and Kajal took the afternoon train from Hyderabad and they would reach Pune at 11 pm.

After some time Bhim and I shared my earphones and listened to Queen and of course our favourite, The Doors. I remember how we were jamming, moving and doing our head banging to the music, we didn’t care a damn!

Around 8.15 pm we reached Pune and right when we came out we felt the cool air hitting us. Aaaaah! This was nothing like Bombay!

After some unfortunate failed Uber bookings we finally reached the hotel. Srini had already booked it so we had time to relax and the first thing on both our minds was BEER! All we wanted to have was chilled beer with our all time favourite Chilli Paneer! Yup that’s our poison people.

Bhim took a long shower while I watched some TV and was messaging Srini. He didn’t have a proper vacation since we started the cafe, yup am the nomad not him and this was the first vacation in years with no work stress. He was dying to jump out of the train and run towards Pune!

After Bhim got ready, I got ready and taking his backpack we walked towards ‘Kanak.’ This place was introduced to us two years ago thanks to Aanchal, Srini’s niece who was studying then in Symbiosis. A nondescript place, it was one of the few places open till 5 am.

We settled into one of the low seated tables and mattress and immediately ordered Beer and that Paneer. You look at our pic taken in semi darkness, you will see how dazed we were. As Bhim put it, we look stoned!

Bhim related his date night as Srini asked him what happened. And so my friends, let me tell you the story of his date night really travelled far and wide!

It was time for Bhim to leave and I gave him a big hug and goodbye. I knew I would see him again in July but I would miss him.. He was my crazy companion in travel, treks and thoughts.

As I walked back into Kanak, the final leg of my journey was about to start.. 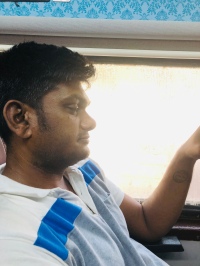 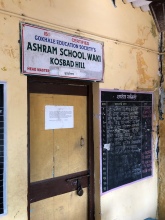 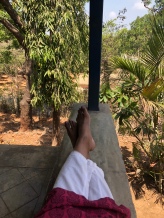 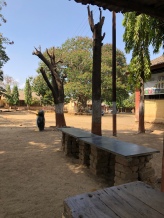 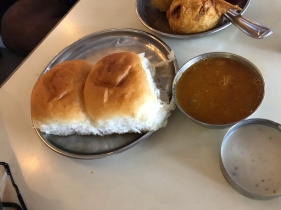